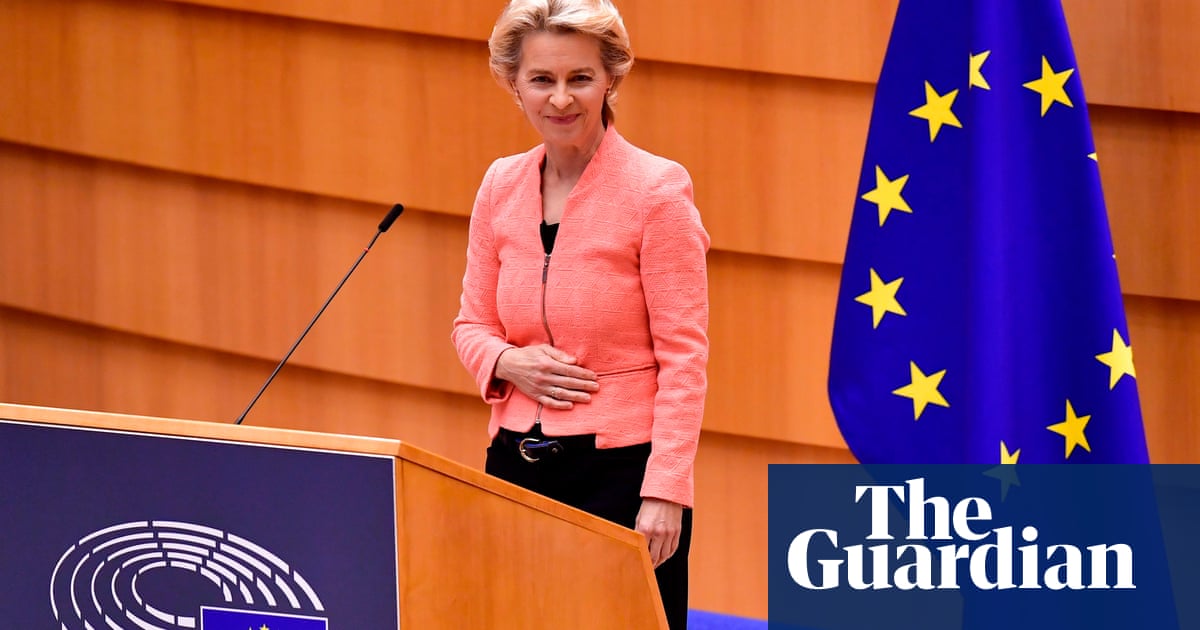 The head of the European commission, Ursula von der Leyen, has said Poland’s “LGBT free zones” are “humanity-free zones” that have no place in the European Union in her strongest criticism yet of Poland’s ruling Law and Justice party.

In a wide-ranging 77-minute speech spanning from coronavirus to the climate emergency, Von der Leyen pledged to build “a union of equality” and criticised European member states that watered down EU foreign policy messages on human rights.

She made plain her disapproval of Poland’s rightwing nationalist government, which has often hit out at “LGBT ideology”, while a number of Polish towns declared themselves “LGBT-ideology free zones”.

“Being yourself is not your ideology,” Von der Leyen told applauding MEPs in the European parliament in Brussels. “It’s your identity,” she said. “So I want to be crystal clear – LGBTQI-free zones are humanity free zones. And they have no place in our union.”

The EU is locked in a long-running dispute with Poland over the rule of law, since the ruling Law and Justice party embarked on policies that weaken independent courts. With no end in sight, that fight is set to intensify, as Von der Leyen signalled she would not back down on linking EU funds to financial probity, following questions over the use of European money in Hungary and the Czech Republic. She said protecting the EU budget “against any kind of fraud, corruption and conflict of interest” was “non-negotiable”.

The commission president lamented that EU foreign policy could be “delayed, watered down or held hostage for other motives”, as she called for an end to national vetoes.

Brussels has long called for an end to national vetoes on foreign policy, but Von der Leyen – who has pledged to lead a “geopolitical commission” – made the point by criticising EU governments for blocking stronger positions.

The EU, Von der Leyen said, needed to call out human rights abuses, whether in Hong Kong or over the fate of the Uighurs. “But what holds us back? Why are even simple statements on EU values delayed, watered down or held hostage for other motives? When member states say Europe is too slow, I say to them be courageous and finally move to qualified majority voting – at least on human rights and sanctions implementation.”

She promised her officials would draft a “Magnitsky act”, a targeted sanctions regime to punish human-rights offenders. Similar legislation already exists in the US and was recently introduced in the UK. The acts take their name from the Russian lawyer Sergei Magnitsky, who died in a Moscow jail aged 37, after uncovering a massive tax fraud by state officials.

The commission president, a close ally of the German chancellor, Angela Merkel, criticised the Russian government by describing the poisoning of the opposition activist Alexei Navalny as “not a one-off” and part of a pattern of behaviour. “This pattern is not changing – and no pipeline will change that,” she added in a cryptic reference to the German-Russian Nord Stream II pipeline that Merkel’s government is under pressure to withdraw support from.

Von der Leyen was delivering her first “state of the union” speech, since beginning a five-year term last December. The annual speech to the European parliament, an idea consciously modelled on its US namesake, is intended to set out EU legislative priorities.

In the speech that cited Andrei Sakharov, Margaret Thatcher and John Hume, she struck an upbeat tone about EU unity, after a shaky start when EU member states closed borders and slapped export bans on medical supplies.

Having chided EU governments in the past for failing to show help to Italy in its hour of need, Von der Leyen struck a more optimistic note, saying member states had overcome their differences; including by agreeing a €750bn (£688bn) recovery plan.

“We turned fear and division between member states into confidence in our union,” she claimed. She said the EU needed more powers to tackle future pandemics and vowed to create an agency for biomedical advanced research and development, an equivalent to the US agency funding vaccine research, Barda.

Without naming Donald Trump, she made a few swipes at the current US president, attacking “vaccine nationalism” and major powers, who are “pulling out of institutions or taking them hostage for their own interests”. But the EU could be on a collision course with a new Democratic incumbent of the White House, as Von der Leyen promised to revive plans for an EU digital tax in the absence of an international agreement. Barack Obama’s administration complained that Brussels was unfairly singling out US tech giants.

As widely trailed, Von der Leyen proposed the EU should cut greenhouse gas emissions by “at least 55%” by 2030 compared with 1990 levels. Green campaigners have welcomed the increase in ambition (upping the current 40% reduction target) but fear “an accounting trick” in how the new target will be calculated.

Preoccupied by coronavirus and foreign policy crises, EU leaders have given little attention to Brexit in recent months. Von der Leyen said the chances of an agreement were fading with every day that passed, as she warned the UK government not to renege on the Brexit withdrawal agreement Boris Johnson signed last year. Noting that the Brexit deal had been ratified by MEPs and MPs, Von der Leyen said it could not be “unilaterally changed, disregarded, disapplied. This is a matter of law and trust and good faith.”

Von der Leyen, who is the first female president in the commission’s 63-year history, said the EU had to do more to confront racism in the wake of the Black Lives Matter protests. In a move that could trigger conflict with sovereignty-conscious member states, she proposed extending the list of EU crimes to cover all forms of hate crime and hate speech, whether linked to race, religion, gender or sexuality.

She promised to appoint the EU’s first-ever anti-racism coordinator “to keep the issue “at the top of our agenda”.