Warwick racecourse will stage its first jumps meeting of the new season on Monday with a maximum of 474 spectators in attendance, after its pilot to pave the way for a more widespread return of spectators to tracks received the go-ahead from local council officials on Wednesday.

The maximum crowd is below the 800 which the course had originally hoped to admit and there will be no tickets on general sale as a result. Instead, the limited capacity will be filled from annual members and racegoers with pre-booked tickets for hospitality areas.

The course will also contact all ticket holders from areas under local lockdown measures – including nearby Birmingham and Solihull – to inform them that they will not be able to attend, and offer a refund or a switch to a meeting later in the year.

“We’ve gone through a very robust process with our public health authority,” Andre Klein, Warwick’s general manager, said on Wednesday. “They’ve taken this very seriously and sensibly, and they said that it was the most compelling argument they had seen in Warwickshire at any stage.

“Any customers from areas identified as high-risk by public health will be contacted to tell them they can’t come. You can imagine how onerous that is, but that’s one of many different health and safety measures we’ve got in place.

“Public health will give us a list of local authorities they deem unsafe on Friday evening and we will contact everyone then. With our annual members, that could be quite a high percentage [who are unable to attend], as quite a lot come from the Birmingham and Solihull districts.”

The decision to restrict attendance means that last Wednesday’s card at Doncaster is still the only meeting since mid-March where some tickets have been on general sale. The track’s planned four-day pilot was cut short after one day following an intervention by Dr Rupert Suckling, Doncaster’s director of public health.

“I can understand why it was a difficult decision for our public health authority,” Klein said, “but we’ve got a great relationship with both the local and district councils and it had to happen under a set of protocols that they were really happy with.

“They’ve also got to be fair, because Warwick Castle is 500 metres away and that has 2,500 guests every day, there are massive car boot sales and markets and places like that. They need to deliver a level playing field and give us a fair trading opportunity. They’ve done that, and we’re really pleased.”

Warwick’s pilot on Monday is due to be followed by a three-day trial with 1,000 spectators each afternoon at Newmarket’s Cambridgeshire meeting from 24-26 September, which was approved by local officials on Tuesday.

In Ireland, however, the prospects for any return of significant crowds to racecourses still appear bleak after the Taoiseach, Micheal Martin, set out a road map for the next six months of its recovery from the coronavirus pandemic on Tuesday.

The plan sets out five levels of Covid-19 spread with the country at level 2, allowing only 200 additional attendees at meetings along with officials and participants. Should its situation improve to level 1, the limit will rise to just 500 at venues which were previously able to accommodate 5,000 spectators.

That would, on the face of it, rule out any paying attendance at Leopardstown’s four-day Christmas fixtures as well as the two-day Dublin Racing Festival in early February – six of the seven biggest days at Ireland’s best-attended track. The remaining fixture at Leopardstown with a normal attendance at or near 15,000 is Irish Champion Stakes day, which took place last Saturday behind closed doors. 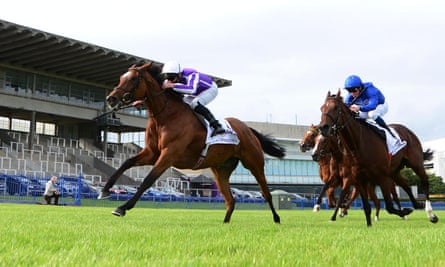 Since the absence of fans over the two days of the Champions Weekend is estimated to have cost the sport at least (euros) 8m, the huge hole in Irish racing’s income stream would increase by at least (euros) 20m if its two biggest fixtures over the winter campaign take place without spectators.

Horse Racing Ireland has not given up hope, however, and believes that a paragraph in the road map which refers to “very large, purpose-built event facilities” and “national and international events” could offer a glimmer of light.

“There’s 200 [spectators] in the road map and that should allow us to get owners back in, which has been a priority, Brian Kavanagh, HRI’s chief executive, said on Wednesday, “and it’s also clear that even at level 3 and level 4, racing can continue behind closed doors, so that clarity is welcome.

“What needs further clarification is the clause relating to purpose-built venues and the guidelines for national and international events. We need to clarify whether we can fall under that or not, but otherwise the guideline will be [a maximum of] 500 for the next six months. We’ll see how that works out, but obviously public health must come first.”