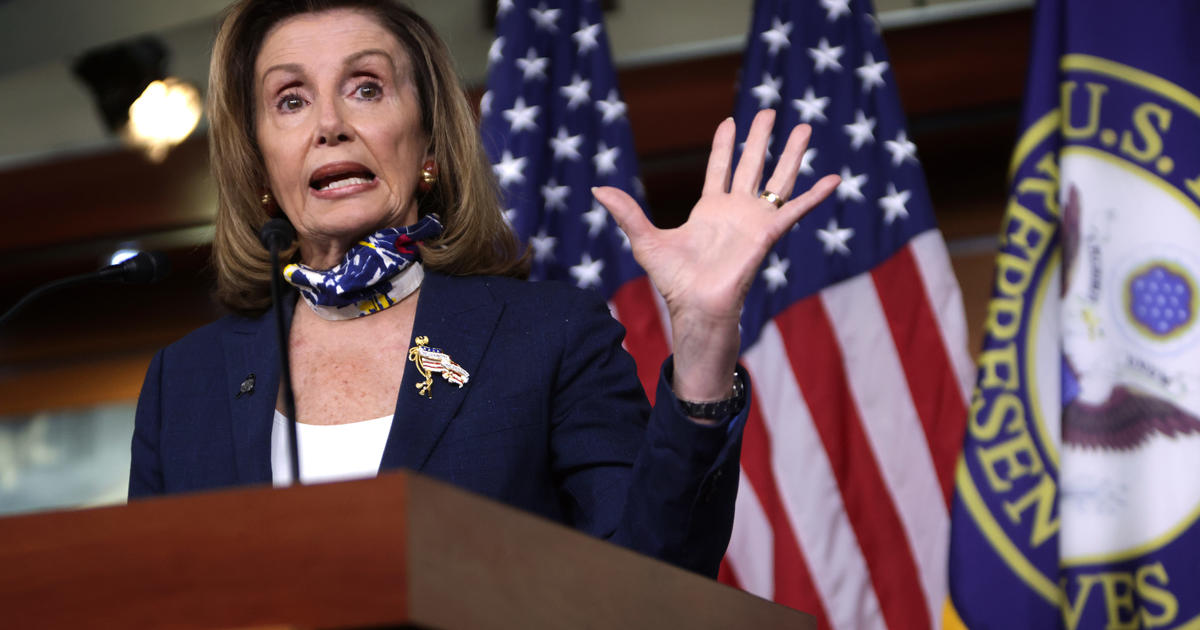 Washington — Speaker Nancy Pelosi pushed back against reports that some House Democrats are frustrated with the lack of movement on negotiating a new coronavirus relief bill, the day after a bipartisan group of lawmakers released their own proposal to respond to the pandemic.

Pelosi said in an interview with MSNBC that she has a “beautifully diverse caucus.” She noted that some Democrats want her to once again put the $3.4 trillion HEROES Act — which passed in the House in May but has not been considered in the Senate — on the House floor for another vote and “come down from there.”

“I’m used to building consensus in my own caucus. I’m proud of every statement that members are making, and I’m especially proud of our chairs, who have been solid in terms of what we need, where we could perhaps change the timing so it’s less money now. That’s how we were able to come down. We didn’t cut things out, we just brought it down,” Pelosi said. “But, it’s important to note this, that was four months ago, May 15. This has accelerated since then. We have additional needs for restaurants, airlines and the rest and those things have to be taken into consideration as well.”

However, the proposal faced a sharp rebuke from eight Democratic committee chairs, who said in a statement that it “falls short of what is needed to save lives and boost the economy.”

“When it comes to bolstering the public health system, supporting state and local governments, and assisting struggling families, the Problem Solvers’ proposal leaves too many needs unmet,” the statement said.

Congressman Max Rose, a freshman lawmaker who flipped a Republican seat, told CNN that the automatic rejection of the proposal was an example of “all the reasons why people hate politics.”

“They are rejecting a bold bipartisan measure outright and insinuating things are not in there when they actually are and just continuing to kick the can down the road over and over and over again,” Rose said.

Even if the Problem Solvers Caucus’ bill passed in the House, Senate Republicans would likely balk at the price tag. Senate Republicans attempted to pass a measure costing about $500 billion last week, but Democrats blocked the slimmed-down relief bill.

But President Trump urged Republicans to consider larger numbers for a relief bill in a tweet on Wednesday. Senator John Thune told reporters that raising the price tag would “create a lot of heartburn in terms of the overall amount.”

“We are encouraged that after months of the Senate Republicans insisting on shortchanging the massive needs of the American people, President Trump is now calling on Republicans to ‘go for the much higher numbers’ in the next coronavirus relief package,” Schumer and Pelosi said. “We look forward to hearing from the President’s negotiators that they will finally meet us halfway with a bill that is equal to the massive health and economic crises gripping our nation.”

Negotiations between congressional Democrats and White House officials broke down weeks ago. Pelosi and Schumer said they were willing to lower their proposal to $2 trillion, but Treasury Secretary Steven Mnuchin and White House chief of staff Mark Meadows argued that Democrats wanted to include too many provisions that they felt were unrelated to the pandemic.

Pelosi told members of her caucus on Tuesday that she wanted the House to remain in session until a deal was reached. Congress must also agree on a package to fund the government before funding expires at the end of September.