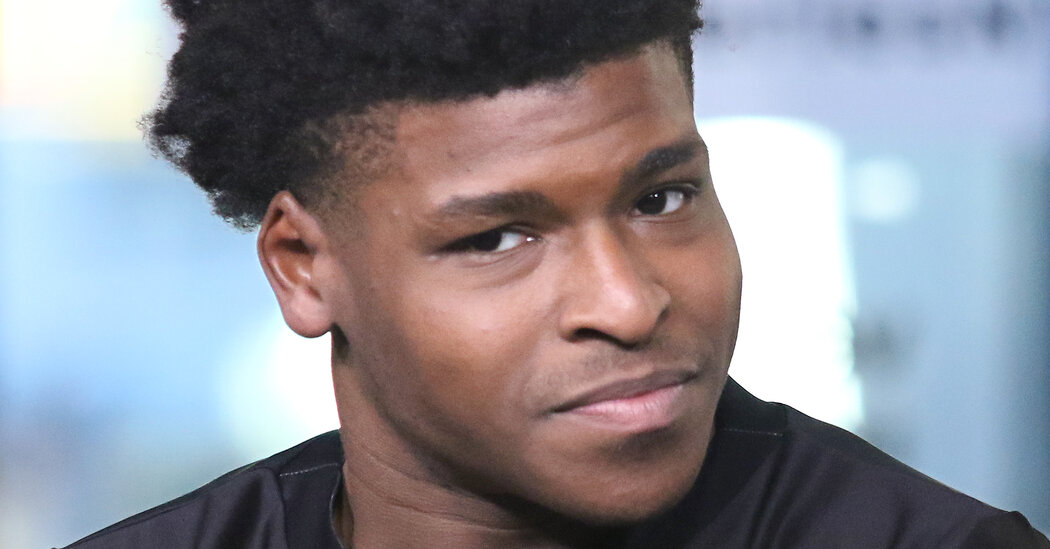 Jerry Harris, a student featured in the Emmy-nominated Netflix series “Cheer,” was sued on Monday by 14-year-old twin brothers in Texas who say that he solicited sex, sent them sexually explicit messages via text and social media, and asked them to send nude photos of themselves.

The lawsuit, filed in the District Court of Tarrant County in Texas, accuses Mr. Harris, who is now 21, of asking one of the boys for oral sex at a cheerleading competition and threatening “imminent physical bodily injury.”

The boys are not named in the suit because they are minors.

The suit accuses Mr. Harris of “sexual harassment, exploitation abuse and molestation” of the boys. It states they are now “limited in their ability to meaningfully interact with others due to the trauma of childhood sexual abuse.”

A representative for Mr. Harris did not respond to a request for comment on Wednesday. But a spokesperson for him has told People: “We categorically dispute the claims made against Jerry Harris, which are alleged to have occurred when he was a teenager. We are confident that when the investigation is completed, the true facts will be revealed.”

Mr. Harris, who was a member of the cheerleading team at Navarro College in Corsicana, Texas, and at one time coached athletes at National Cheerleaders Association camps, gained acclaim on the Netflix series for his upbeat attitude and spirited pep talks and he had endorsement deals with Cheerios and Walmart. He made a guest appearance with other cast members on the Dallas stop of Oprah Winfrey’s nationwide wellness tour in February and held an Instagram chat with Joe Biden in June.

He “violated his role as a mentor, trainer, coach, sexually violated the Plaintiffs,” the lawsuit said, “and used his position of authority and power over the Plaintiffs.” It also states that three organizations — the U.S. All Star Federation, Cheer Athletics and Varsity Spirit — that employed Mr. Harris or that organized or oversaw competitions he participated in as an athlete or as a coach when the behavior is alleged to have occurred did not do enough or act quickly enough to protect the boys.

Mr. Harris befriended the boys when they were 13 and Mr. Harris was 19, USA Today first reported on Monday. They met him while competing in national cheerleading competitions organized and overseen by Varsity Spirit and the All Star Federation and communicated with him in person, by phone and on social media.

According to the suit, they were “star struck” by Mr. Harris, who was nationally known as a cheer personality and coach. He asked for their phone numbers and Instagram, Twitter and Snapchat handles, and, the boys say in the lawsuit, the interactions became sexual in nature “almost immediately.” They also said that Mr. Harris asked that they send him “booty pics.”

The boys’ mother discovered sexually explicit messages, photos and videos from Mr. Harris on their phones and social media accounts around February 2020, according to the complaint. She reported what she found to the three organizations named in the lawsuit, as well as the Fort Worth Police Department and the F.B.I., one of the boys’ lawyers, John C. Manly, said.

A spokesman for General Mills, which owns Cheerios, said on Wednesday that the company had suspended its relationship with Mr. Harris as soon as it learned of the allegations. He also said the company had removed all content related to Mr. Harris from its advertising.

USA Today also reported on Monday that the F.B.I. was investigating allegations that Mr. Harris asked for sex and nude photos from the boys. The F.B.I. executed “court-authorized law enforcement activity” in Naperville, Ill., on Monday, its Chicago Division said. Mr. Harris owns a home there. He has not been arrested or charged with any crime.

The lawsuit seeks more than a million dollars in damages from the U.S. All Star Federation, Cheer Athletics and Varsity Spirit, citing “emotional distress” and “loss of enjoyment of life.” The lawsuit states that the boys will need medical and psychological treatment, therapy and counseling.

Sarah Klein, another lawyer for the teenagers, said in a statement that she feared there might be other people in the same situation. “We have seen too many examples of national athletic organizations such as U.S.A. Gymnastics, U.S.A. Swimming and others ignore sexual abuse” by those people who have a high profile, like Mr. Harris, she said. “I fear that there may be other victims in this case, and I urge them to follow the lead of our clients and report their abuse to law enforcement.”

Cheer Athletics said that Mr. Harris was strictly an athlete participant, and that his affiliation with it ended at the National Cheerleaders Association Nationals competition on March 1, 2020.