The coronavirus pandemic has peaked earlier than expected in many African countries, confounding early predictions, experts have told MPs.

Scientists do not yet know why, but one hypothesis is the possibility of people having pre-existing immunity to Covid-19, caused by exposure to other infections.

Prof Francesco Checchi, a specialist in epidemiology at the London School of Hygiene and Tropical Medicine, told MPs it was “broadly” true that coronavirus had not behaved in expected ways in African countries, including Kenya, Tanzania, Sudan and Somalia.

“We are certainly observing a pattern that confounds us a little,” he told the international development committee’s inquiry into the impact of Covid on humanitarian crises.

“In a few important case studies – Kenya, for example – what seems to be happening is the epidemic may be peaking earlier than our naive models predicted.”

He said a similar pattern has emerged in Yemen, which is in the middle of the worst humanitarian crisis in the world.

“Yemen is one of the few countries where to my knowledge there is almost no prevention of Covid transmission,” Checchi said.

“The anecdotal reports we’re getting inside Yemen are pretty consistent that the epidemic has, quote unquote, passed.

“There was a peak in May, June across Yemen, where hospitalisation facilities were being overwhelmed. That is no longer the case.”

It was possible that the population had accrued some sort of “herd immunity” at least temporarily, he said.

While that was “very good news”, Checchi said he was unable to say whether it had been less lethal or less severe on a per capita basis. In many developing countries, where testing is poor and deaths are not notified to the authorities, the rate of reported deaths is very low.

A study published on Tuesday from Imperial College London estimated that in Damascus, Syria, reported deaths from coronavirus were as low as 1.25% of the true figure.

Checchi and his team are examining satellite images of graveyards in Aden, in the south of Yemen, and early results point to “considerable mortality with a peak in May in that city”.

He said there could be up to a million cases in Yemen, based on one data modelling run. 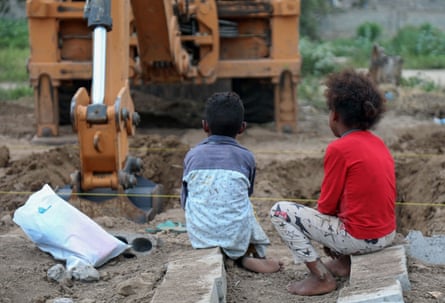 Yemeni children watch as an excavator digs graves for Covid-19 victims … there may have been up to a million cases in the country. Photograph: Ahmad Al-Basha/AFP

He and colleagues are now looking at explanations for the earlier than predicted peak in some low-income countries.

“These range from the effect of age, to some sort of role for pre-existing immunity to pre-exposure to other infections, to other hypotheses. It isn’t a simple analysis.”

On Tuesday, a special envoy to the World Health Organization warned that the world was still at the “beginning” of the pandemic.

Prof Azra Ghani, an epidemiologist at Imperial College London, told MPs: “We know deaths are being underreported. We are starting to look at other sources of data, for instance media reports of funerals, to try to get a better handle on it.”

The percentage of reported deaths varies from country to country, she said, and determining how the epidemic behaves was vital to answer questions about how countries can recover.

“If infections have swept through and if there is a degree of immunity, then it would be possible for those economies to open up a little, but more safely, than if populations were quite naive to infections.”

Checchi said the theory that most of the population had temporary immunity had “radical implications”, for example on when to send children back to school.

MPs were told of a “consistent pattern of stigma”, where people facing humanitarian crises are reluctant to come forward for treatment and testing.

NGOs also told the committee that the epidemic had created huge levels of unemployment in developing countries and that many had “lost all their coping mechanisms”.

“We predict that will only get worse,” said Selena Victor, a senior director of policy at Mercy Corps.