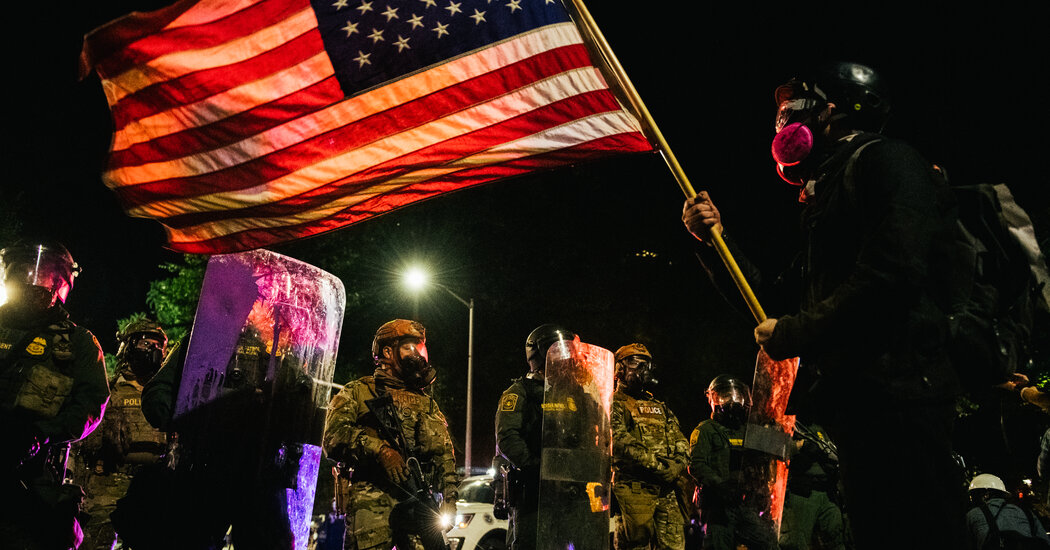 WASHINGTON — Attorney General William P. Barr told federal prosecutors in a call last week that they should consider charging rioters and others who committed violent crimes at protests in recent months with sedition, according to two people familiar with the call.

The highly unusual suggestion to charge people with insurrection against lawful authority alarmed some on the call, which included U.S. attorneys around the country, said the people, who spoke on the condition they not be named describing Mr. Barr’s comments because they feared retribution.

The most extreme form of the federal sedition law, which is rarely invoked, criminalizes conspiracies to overthrow the government of the United States — an extraordinary situation that does not seem to fit the circumstances of the unrest in places like Portland, Ore., and elsewhere in response to police killings of Black men.

A Justice Department spokeswoman did not respond to a request for comment. The Wall Street Journal first reported Mr. Barr’s remarks.

The attorney general’s advice dovetailed with his aggressive approach to confronting the unrest and staunch backing of law enforcement. He personally commanded federal forces trying to quell protests in Washington, told federal prosecutors to focus resources on combating violent crime and compared criticism of the police with attacks on Vietnam veterans while denying systemic racism in policing.

Mr. Barr has also emerged as a messenger of the president’s key plank in his re-election campaign: that only President Trump can keep the country safe. Mr. Barr directly inserted himself into the presidential race in recent days to warn that the United States would be on the brink of destruction if Mr. Trump loses, telling a Chicago Tribune columnist that the United States could find itself “irrevocably committed to the socialist path” if Mr. Trump loses and that the country faced “a clear fork in the road.”

The president’s supporters say Mr. Barr’s approach is necessary to preserve order at a moment that threatens to spiral into violence and to tamp down unrest in cities where the local authorities will not.

But Mr. Barr’s comments, particularly on campaign issues, have also thrust the Justice Department into the political fray when Democrats and former law enforcement officials have expressed fears that he is politicizing the department, particularly by intervening in legal matters in ways that benefit Mr. Trump or his circle of friends and advisers.

About 93 percent of the protests in the United States this summer were peaceful, according to a report by the Armed Conflict Location and Event Data Project, which monitors political upheaval worldwide. The report looked at 7,750 protests from May 26 through Aug. 22 in 2,400 locations across all 50 states and the District of Columbia.

But far-right and far-left groups, as well as looters and rioters, have seized on the protests to commit acts of violence, including deadly shootings — serious crimes that some federal prosecutors said could not be dismissed out of hand as anomalous, particularly as the threat from extremist groups grows.

Mr. Barr told federal prosecutors on the call that they needed to crack down on rioting, looting, assaults on law enforcement officers and other violence committed during the protests that have continued throughout the country since George Floyd, a Black man in Minneapolis, was killed in May by the police.

The attorney general mentioned sedition as part of a list of possible federal statutes that prosecutors could use to bring charges, including assaulting a federal officer, rioting, use of explosives and racketeering, according to the people familiar with the call. Justice Department officials included sedition on a list of such charges in a follow-up email.

After Mr. Barr spoke, Richard P. Donoghue, a top aide to the deputy attorney general, interjected to note that some of the U.S. attorneys on the call worked in districts where violence during protests was less common, and that the federal prosecutors may not need to use tools as aggressive as sedition charges.

Mentioning that he had visited Portland, Ore., Mr. Donoghue also assured the prosecutors that the Justice Department would support all efforts to crack down on violence.

The wording of the federal sedition statute is broader than actual revolutions. It says the crime can also occur anytime two or more people have conspired to use force to oppose federal authority, hinder the government’s ability to enforce any federal law or unlawfully seize any federal property — elements that might conceivably fit a plot to, say, break into and set fire to a federal courthouse.