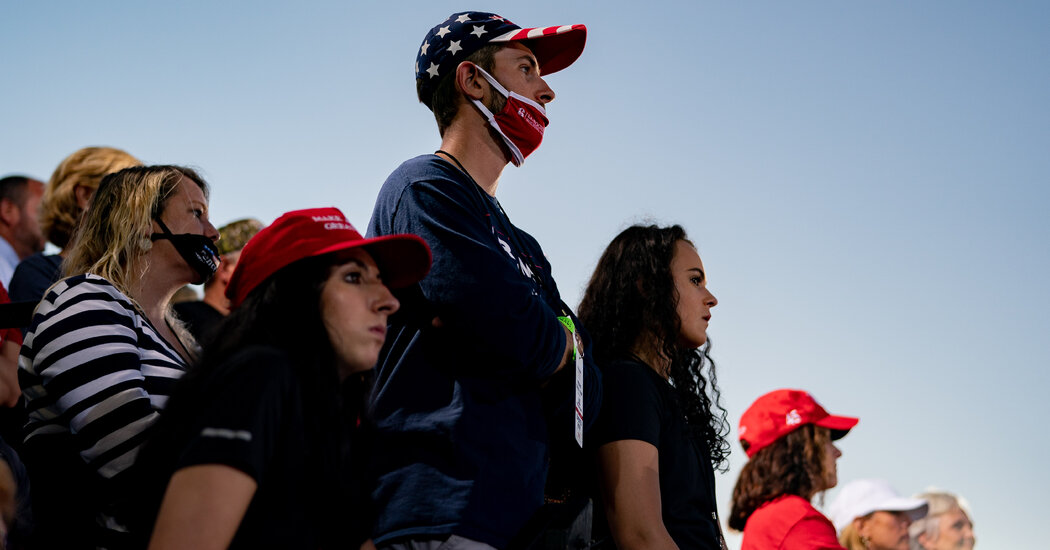 Donald Trump’s coalition in 2016 was an archaism, a throwback — the last gasp of a fading white America, a last dance with the voting blocs that once delivered Richard Nixon and Ronald Reagan their landslides, a resentment-soaked attempt to maintain the power that white Christians once took for granted even as its demographic basis slips away. The Democratic Party’s coalition, on the other hand, looks like the American future — a Californian kaleidoscope of diversity, a multiethnic majority that only voter suppression and the rural bias of the Senate can keep at bay.

This analysis is liberal cliché, but it has become cliché because it fit the trends of 2016 so well. Trump’s coalition really was made up of the old, white and religious to an unusual degree; his racial and identitarian appeals were balder than almost any Republican predecessor’s; and his party’s current share of power does depend on the structure of the Senate and the Electoral College rather than majority support.

It seems increasingly possible, though, that Trump will lose the 2020 election with a somewhat different coalition than the one he won with four years ago. Last week in a Fox News poll (whose relative closeness inspired heartburn in my Twitter feed), Joe Biden led Trump 51 percent to 46 percent, meaning that the president earned about the same prospective vote share as he won in 2016. But in the poll, Biden led by nine points among seniors, a group Trump won by nine points last time. Meanwhile, Trump reached 41 percent with Hispanics, which would be the highest share for any Republican nominee in decades.

Both of the Fox demographic numbers are likely outliers, but a more modest version of the Hispanics-for-Trump trend shows up in a lot of polling. Win or lose, the whiteness of Trump’s Republican coalition is likely to decrease and the racial polarization of the electorate to modestly diminish.

This development, if it comes, will be a provisional indicator, not proof of any certain future — any more than the composition of Trump’s 2016 coalition proved anything definite about the world to come. But in a year defined by left-wing racial-justice activism, unexpected Republican strength with a nonwhite voting bloc would hint at the risks for progressives in their own kind of archaism, their own politics of nostalgia.

If the essence of Trumpian nostalgia is a view that the United States can be governed as the conservative white-Christian country it hasn’t been for years, the essence of liberal nostalgia is the idea that the politics of racial redress in 2020 can simply pick up where the racial politics of 1965 left off — as though the racial divisions in 21st-century America looked like the color line of 50 or 60 years ago.

This idea, implicit or explicit, is woven through the anti-racist arguments elevated since the killing of George Floyd. The centering of slavery’s arrival in America as an alternative to 1776, the depiction of “whiteness” as not just a useful concept but the central category of American experience, the evocations of Reconstruction as a model for the 2020s, the capitalization of “Black” (and in some cases “White” as well) and the collapse of all nonwhite experience into a shared story of racist oppression: In all these ways and more the liberal narrative increasingly assumes a bifurcated America, with four centuries of white privilege on one side and the history of slavery and segregation as the defining minority experience on the other. And the crucial political question, then, becomes whether enough white people can be persuaded to cross this color line and join what Adam Serwer, in an Atlantic essay, calls the first potential “anti-racist majority in American history.”

But much of this bifurcation belongs to the past, no less than Trump’s white-Christian pastoralism. Specifically, it belongs to the country that existed at the time of the civil rights movement: a country with low in-migration rates and longstanding restrictions on non-European immigration, a country that had just passed through a 40-year project to assimilate Central and Eastern European immigrants while imposing segregation and exclusion for citizens of African descent, a country of two colors where 88 percent of the population was categorized as white.

That is not the America that exists today. Not just the scale but the sheer diversity of post-1968 immigration has made our racial categories more complex, and in the process substantially changed what it means to have a debate about whiteness or racial redress or desegregation. And a liberalism that tries to collapse these complexities back into a binary is likely to end up with an agenda as anachronistic as Make America Great Again and a coalition no less vulnerable than the Republicans to the effects of demographic change.

Some of those vulnerabilities can be distilled into pointed questions. What does a program of school desegregation look like in a country where white kids are a downward-trending minority in the public school system? Can an anti-racist liberalism maintain a system of affirmative action that obviously discriminates against the country’s fastest-growing minority group, Asian-Americans, in order to achieve its goals of ethnic balance? Can unwieldy academic categories — “Latinx” for a diverse Spanish-speaking population that evinces little interest in the term, “BIPOC” for everyone from Native Americans to Pakistani immigrants to the millions of children of interracial marriages — create durable political identities that subsume wildly divergent ethnic experiences? What happens to the votes of American Jews in a political left that increasingly regards them as a privileged cohort rather than as an oppressed one?

And finally, is it really possible to sustain an anti-racist political coalition whose most important white participants, the members of the intelligentsia and professional classes, are the institutional and often lineal heirs of the pre-1960s white Protestant establishment? By any reasonable measure, this inheritance means that the white liberals most invested in anti-racism have more white privilege themselves than the heirs of rural fundamentalists and immigrant Catholics who currently vote for Trump. Political coalitions need an out-group, an antagonist, but what happens when the coalition’s internal logic makes one of its inmost in-groups an enemy as well?

The theoreticians of anti-racism have answers to these questions, but many of those answers promise to save their theories rather than their political project. If an anti-racist coalition loses power because too many Hispanics or Asian-Americans abandon it, that will just prove the power of whiteness to co-opt, suborn and seduce. Likewise, if the current progressive coalition sustains itself by limiting the demands of anti-racism to symbolic rituals of white self-abnegation, with material reparation perpetually postponed, then that will just show the resilience of privileged “nice white liberal” racism.

But it’s also possible that if liberalism’s hope of a pan-ethnic majority falls apart, then the sweeping theories of whiteness will themselves bear an important share of blame — because their reductionist approach to a variegated social landscape makes unexpected reactions like a Hispanic drift toward Trump more likely.

Alternatively, some of the most immediate and reasonable demands of anti-racism — from reformed police departments to shorter voting lines — can probably be achieved with a racial politics that’s more transactional and incremental, and therefore more durable, than the sweeping rhetoric of Reconstruction and reparation and white privilege. (As, indeed, a limited form of criminal justice reform was achieved even under Donald Trump.)

This was the original promise of the Biden candidacy: a continuation of the incrementalism of the Obama era, which disappointed many activists and intellectuals but still has plenty of minority support.

This summer’s ideological revolution within liberalism has made such incrementalism seem like cowardice rather than prudence. But I still suspect that the pan-ethnic political majority of 2030 or 2040 will belong to the party — right or left — that figures out how to approach racial issues as a normal and even slightly boring kind of politics, shorn of nostalgia and utopianism, and sensitive to both the demands of racial justice and the ever-increasing racial complexity of America as it actually exists.