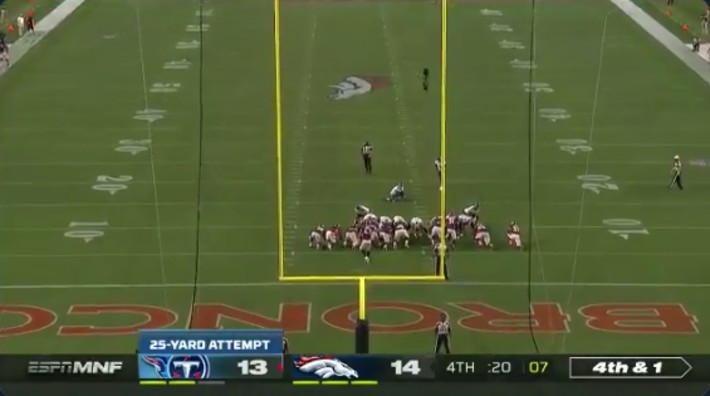 Stephen Gostkowski entered Monday night as the fifth most accurate kicker in NFL history — although, despite what Steve Levy said on the broadcast, he’s almost assuredly not a Hall of Famer. By the end of the night, he had seen his make percentage take a hit as the former Patriot missed three field goals (one right, one left, and one blocked) and an extra point in his debut for the Tennessee Titans in Denver, becoming the first kicker to do so in his debut with a new NFL team since 1968.

Stephen Gostkowski is the first kicker to miss 4 kicks (FG or PAT) in his first game with a team since Dennis Partee did so for the Chargers on September 6, 1968.

It was a dreadful night for Gostkowski and it looked like his kicking woes might end up costing Tennessee an opening night win after the Broncos took a 14-13 lead in the fourth quarter on a Melvin Gordon touchdown, and a successful PAT of their own. However, as the football gods would have it, some bizarre clock management down the stretch by both teams put the game’s fate on the right foot of Gostkowski in the final minute of play.

The Titans drove down the field methodically, milking the clock for all it was worth with quick passes and handoffs to Derrick Henry. By the time they got inside the 10, they tossed a fade that just missed on third-and-1, leaving 20 seconds on the clock for Gostkowski to seal the deal one way or the other. Naturally, in the midst of his worst night as a professional, Gostkowski powered through the chip shot and handed Tennessee an opening night win.

It was a cool redemption story, but the Titans certainly have some decisions to make going forward with a kicking situation that is apparently just as shaky as it was a year ago when they were a disaster in that area as well. For the Broncos, it was a mind-numbing clock management decision from Vic Fangio, who ended the game with two timeouts in his pocket and a Hail Mary attempt that never crossed the 40. Even icing Gostkowski, who to that point was clearly in his head, would’ve made sense. Instead, Denver starts another season with a loss as Fangio’s tenure has not produced the best fourth quarter performances — or offensive effort.