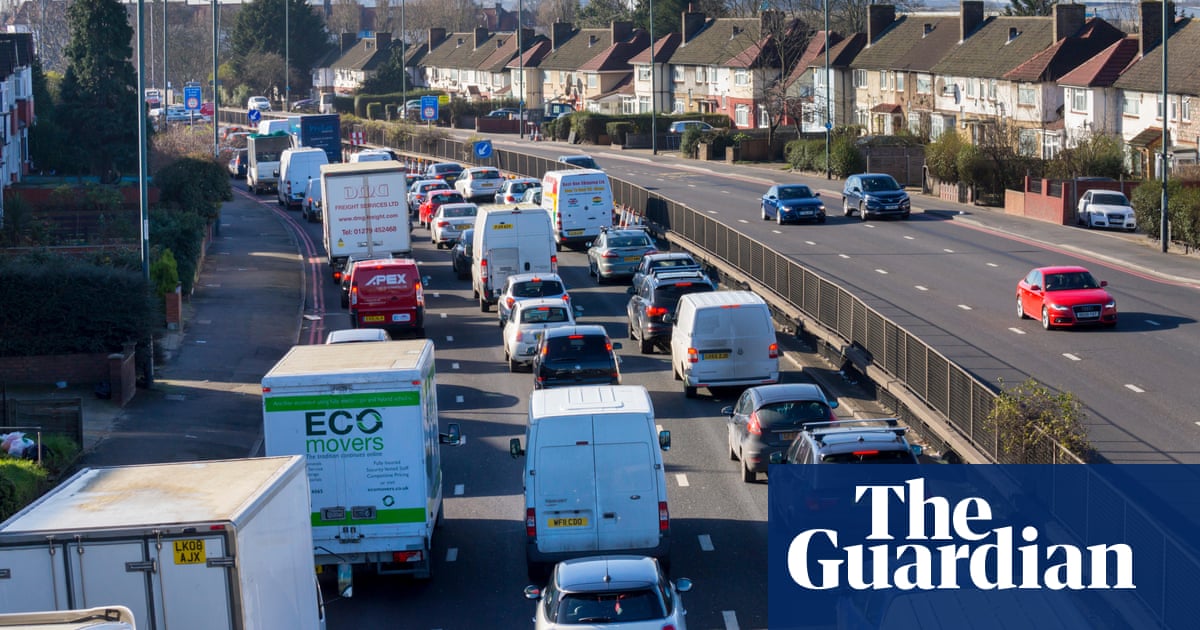 Road traffic congestion in outer London is now far higher than it was last year as people have gone back into their cars after lockdown, according to new data.

Congestion climbed above 2019 levels in August, and has increased to nearly a fifth on average above last year, in roads outside the capital’s central congestion charging zone, even while it has dropped sharply in the centre of the city.

The most congested day so far was Monday 7 September, when congestion stood at 153% of 2019 levels. That coincided with many schools returning to the classroom, and followed government messages pressing people to return to the office rather than continue to work from home, as millions of office workers have been doing.

Congestion within the central charging zone stood at just over half the levels of 2019, though this is still a substantial increase on the deserted streets seen in spring when the lockdown was biting. Congestion fell to just 6% of the 2019 average on its lowest day, in early May.

The data comes from the Waze for Cities programme, which uses GPS data submitted by users of the navigation app. The data is complied from about 1 million active monthly users in London, and is based on their journey times as recorded automatically by GPS. That is used to give a daily measure of traffic congestion, where a congested road is one where traffic is moving at 80% or less of its free-flowing speed.

The findings also reflect the impacts of changes to congestion charging in central London, as higher charges may be encouraging drivers to switch to routes outside the charging zone. The charge was reinstated in May after its suspension on 23 March when lockdown came into force, and on 22 June was increased from £11.50 to £15 a day and the hours of operation lengthened.

Environmental campaigners said the new congestion data was worrying, as higher congestion levels are associated with dirtier air and an increase in greenhouse gas emissions. Oliver Lord, head of policy and campaigns at Environmental Defense Fund Europe, said: “Traffic congestion is precisely what we should prevent as our polluted city emerges from lockdown. We need to help people get around without private cars because congestion delays buses, disrupts essential trips and makes it horrible to walk and cycle. This analysis is a rallying call for action, including safer streets for cycling instead of driving, more public transport connectivity and a concerted effort from business to curb the record number of vans on our streets.”

The Waze data does not measure the volume of traffic, and journey times may be affected by other Covid measures, such as local councils restricting traffic and widening pavements to make streets safer for pedestrians. It also cannot measure how much of the traffic is likely to be cars, buses and lorries, and cannot measure air pollution. However, vehicles travelling through congested streets are likely to emit high volumes of local air pollutants including particulate matter and nitrogen oxides.

The data also reinforces early indicators from other sources that traffic and air pollution are increasing after lockdown, and reports that many people are returning to office work in their cars rather than using public transport.

Stephen Edwards, director of policy at Living Streets, a charity that promotes walking, said: “This concerning data should serve as a warning that the opportunity to embed the health and environmental benefits of fewer vehicles is not lost. Better streets for walking and cycling are better for us all. We must move ahead with schemes to promote these behaviours.”

Separately, campaigners called for the government and local authorities to act on high pollution levels near schools. Halving air pollution near schools would also halve the number of children suffering from poor lung function in the UK, according to research from Queen Mary University of London.

Geraint Davies MP, chair of the all-party parliamentary group on air pollution, said: “Before the pandemic [we] knew air pollution can harm children’s lung capacity, hearts and mental health, reducing concentration levels and increasing anxiety in the classroom. Now we know air pollution increases coronavirus infection rates and makes the symptoms of the disease worse. We need to redouble our efforts to reduce air pollution both in and outside schools.”

A spokesperson for the mayor of London said: “Toxic air contributes to thousands of premature deaths in London every year and there is now evidence linking air pollution with an increased vulnerability to Covid-19.

“London’s recovery from this pandemic must be a green, fair and healthy one, and it’s clear that Londoners agree. Our challenge is to eradicate air pollution permanently and ensure the gains we’ve made through policies such as Ulez continue. That is why the mayor will be extending the Ulez next year beyond central London and out to the north and south circular roads.”