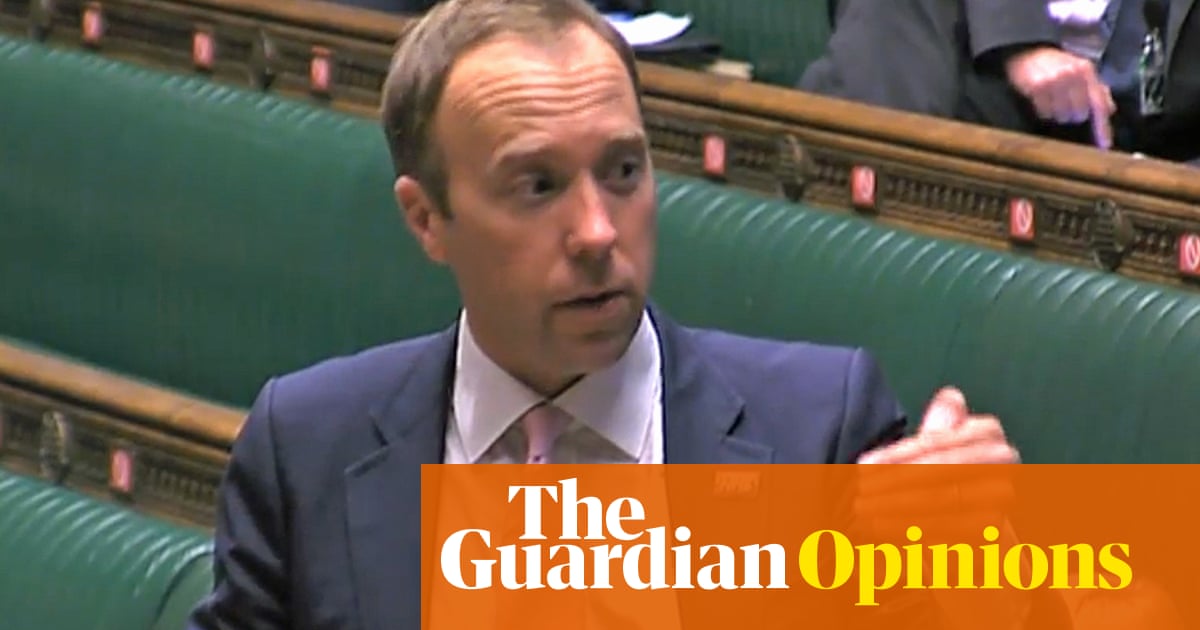 This time it was personal. The Speaker is meant to be impartial, but just hours before Matt Hancock was due to answer an urgent question on the government’s handling of the coronavirus testing systems that he had granted, Lindsay Hoyle tweeted that many of his constituents in Chorley were experiencing severe problems getting a test.

As a warning shot across the health secretary’s bow, it could hardly have been more explicit. This time Hancock was expected to come to the Commons with some real answers.

But like almost all the cabinet these days, Hancock has become a law unto himself. He is a man so near the edge he is genuinely incapable of taking responsibility for anything that happens on his watch, because to do so would inevitably lead to a complete breakdown.

So reports that tests were unavailable in 10 of the areas most badly affected by coronavirus were at best complete fiction and at worst just exaggerations. A leaked email that private laboratories couldn’t handle capacity even when things were relatively quiet during August was just scaremongering.

Instead Hancock continued to insist the UK’s testing system was the envy of the world, people were actually travelling shorter distances to get tests than the previous week – presumably because more individuals had sensibly decided that a 700 mile round trip to Aberdeen wasn’t worth the effort – and that he had always prioritised those in acute clinical care and social care.

Which will have come as news to those who were kicked out of hospitals and into care homes with no tests. And to those care homes still struggling to get tests.

The shadow health secretary, Jon Ashworth, calmly and patiently tried to introduce Hancock to the reality of the situation. It wasn’t just troublemaking Labour MPs whose constituents weren’t getting access to tests, it was also Tory MPs who were trying to deal with the fallout of the government’s lack of planning. Just wait to hear what his own backbenchers had to say.

What made it all the more tragic was its sheer inevitability. Matt had known that there would be extra demand in the autumn but had done nothing over the summer to prepare for it.

It was as if we were living in La-La Land. The government would introduce a target – tests, phone apps and Typhoid Dido’s track and trace – which would invariably get missed. Culminating in the absurd £100bn “Operation Moonshot” that would test 10 million people a day.

But instead of apologising and trying to sort out the mess, Door Matt would allow Boris Johnson to just come out with an even bigger and less feasible target.

This had been going on for months now, said Ashworth, and it was time to stop. The government’s new definition of “world beating” was sending off our tests to be analysed in German laboratories because all the UK postgrads who had been doing them had gone back to university.

Still Matt refused to accept the evidence of MPs from every area of the country. Record numbers of people were getting tests and those who were missing out were just very unlucky. It was also the fault of all those people who were going along and getting tests that came back negative.

If they hadn’t wasted so much NHS time and resources on their imaginary symptoms, it would have meant that those who really needed the tests could have got them. In Door Matt world, the only good coronavirus test is a positive test.

Hancock ended with a familiar Boris trope. Rather than complaining when the government got things wrong, Labour should be congratulating it for not having killed even more people.

That, though was just the start of Matt’s problems. The health select committee chair, Jeremy Hunt, observed that Hancock had promised him a week ago that the testing problems would be resolved in a fortnight. So was he on schedule to meet that promise in seven days’ time.

An internal circuit in the increasingly simple software of Hancock’s brain crashed and the health secretary found himself unwittingly telling the truth. “It could be a matter of weeks,” Matt said sadly. Any number of weeks as a week was just a human construct. Or months possibly, as Hancock went on to describe him as one of the world’s natural optimists. I guess he needs to be. The trouble is that the country needs a minister who knows what he’s doing.

The rest of the session consisted mainly of MPs from both sides of the house trying to talk Matt down from his deluded state. But all that Hancock could offer when told of the many constituents who hadn’t been able to get tests was to refer to the 23 lucky ones who had. The Lib Dem MP Munira Wilson observed that the only way residents in Twickenham were able to get tests in the area was if they were to enter an Aberdeen postcode.

Would it help if everyone was to enter a postcode hundreds of miles from where they lived to get a test on their doorstep? “No,” said Matt testily. The drive would do them good. If they got back alive their symptoms couldn’t have been that bad.

Inevitably, some Tory MPs were keen to seek clarification on the rule of six. Was it possible to introduce some exceptions? It wasn’t. If Boris wasn’t allowed to see all his children at the same time – other than at a grouse shoot – then the same rule had to apply to everyone. This was a first. Normally most rules don’t seem to apply to the prime minister.

It was time to get serious and Door Matt was with Priti Patel. The law was the law and it was a citizen’s duty to dob in anyone found breaking it. In which case there are going to be a a large number of Tory MPs in court for breaking international law next week.