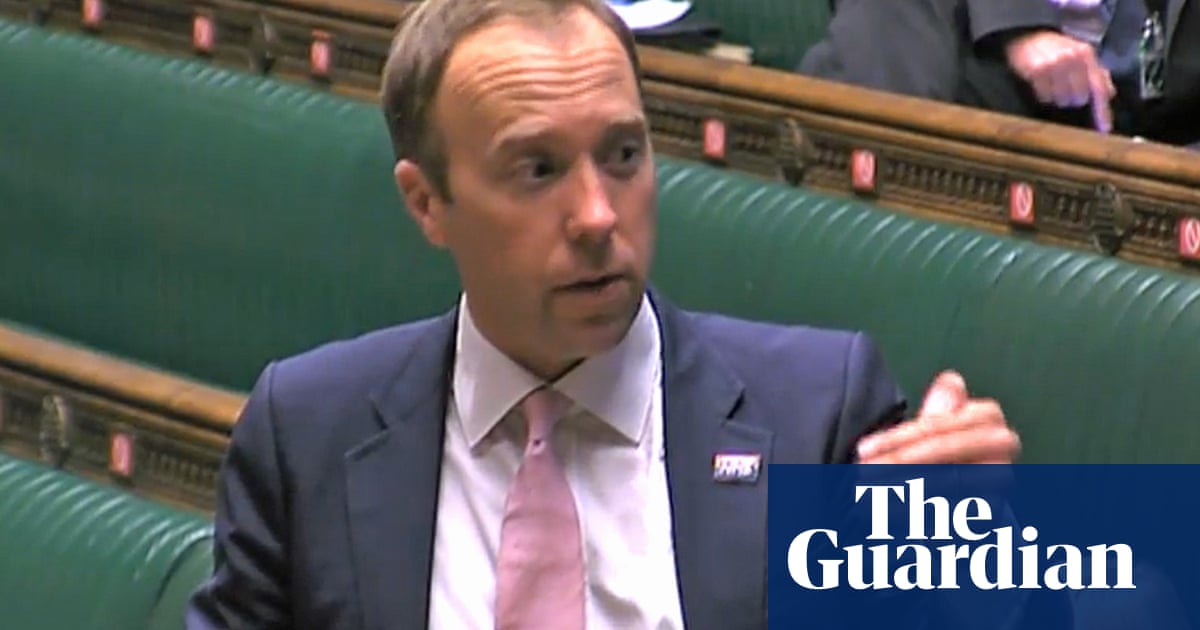 The health secretary, Matt Hancock, has been accused of “losing control” of attempts to stem the rising tide of Covid-19, as Downing Street comes under fresh fire over its handling of the country’s testing system.

In a bruising Commons encounter, Hancock said there had been a “sharp rise” in demand and explained that testing for patients with acute medical needs and people in care homes would be prioritised.

The health secretary said there were “operational challenges” in the testing system and admitted problems could take “weeks” to resolve. Hancock was also forced to warn against attempts to “game the system” after an MP highlighted that people in south west London had succeeded in obtaining tests there after being advised to input an Aberdeen postcode when booking.

It comes after it emerged that people in England’s 10 worst-hit coronavirus hotspots were unable to get tests on Monday, prompting claims that the system was a “shambles”. Health leaders have also warned that a lack of testing is contributing to staff absences across the NHS, putting services at risk.

“We have seen a sharp rise in people coming forward for a test, including those who are not eligible,” Hancock said on Tuesday, responding in the Commons to an urgent question tabled by Labour.

“Throughout this pandemic, we have prioritised testing according to need. Over the summer, when demand was low, we were able to meet all requirements for testing, whether priorities or not.

“But as demand has risen, so we are having to prioritise once again and I do not shirk from decisions about prioritisation. They are not always comfortable, but they are important.”

The shadow health secretary, Jonathan Ashworth, highlighted that at the weekend in Bolton, where infections are highest, a mobile testing centre failed to turn up. Hundreds queued for five hours for a test in Bury, he said. He added that a father with a sick child in Walsall travelled 76 miles to an appointment in Wales to find on arrival that tests had run out.

He said: “ The prime minister promised us whack-a-mole but instead his mallet is broken. The secretary of state is losing control of this virus. He needs to fix testing now.”

Responding, Hancock highlighted that capacity for testing was at a record high and said that the government had processed 9,278 pillar 2 tests (tests carried out in the community) in the top 10 worst-hit areas on Monday.

On Monday, in areas with the highest infection rates, people trying to arrange a test were told none were available at walk- in centres, drive-through facilities or for home delivery. According to one official, there was capacity at test centres, but a backlog in laboratories meant people were being told no tests were available.

The former health secretary Jeremy Hunt pressed Hancock on his claim to the health and social care committee last week that he expected to have testing problems resolved in two weeks.

“Well, I think that we will be able to solve this problem in a matter of weeks,” Hancock said, adding: “In his [Hunt’s] own constituency yesterday 194 people got their tests so we are managing to deliver record capacity but, as he well knows, demand is also high and the response to that is to make sure we have prioritisation so the people who most need it can get the test that they need.”

In a sign of confusion, the Liberal Democrat MP Munira Wilson said that some people struggling to access tests had been advised that if they put an Aberdeen postcode into the booking system they could get one in her Twickenham constituency – and succeeded in doing so.

Asked if she should tell constituents to “game the system”, Hancock replied: “No … in fact it’s incumbent on all of us to take a responsible approach and tell our constituents that tests are available in large numbers, that the average distance travelled is 5.8 miles and that people should take this seriously and not game the system.”

Boris Johnson’s spokesman gave a robust defence of the system on Tuesday, denying that tests were impossible to obtain in virus hotspots. “It’s wrong to say that testing is not available in these areas. Our capacity continues to be targeted to where it is most needed,” the spokesman said.

He said the cabinet had discussed the testing system; and appeared to suggest there would be little imminent improvement, highlighting a new testing system being built in Leicestershire, which would increase capacity by 50,000, in the “coming weeks”.

“Testing was discussed, and we have been clear that we are committed to increasing capacity,” he said.

Asked whether the testing system was, “world-beating”, as the prime minister promised, his spokesman said: “It is one of the world’s largest testing programmes, built from scratch,” adding, “we’re continuing to process more than a million tests a week.”

Asked about the government’s claims that up to 25% of people receiving tests are not entitled to them, he said “the criteria for getting a test has always been clear, and that remains the case”.

It emerged at the weekend that the government’s Lighthouse laboratories were attempting to clear a backlog of 185,000 tests, with some being sent to Germany and Italy to be processed.