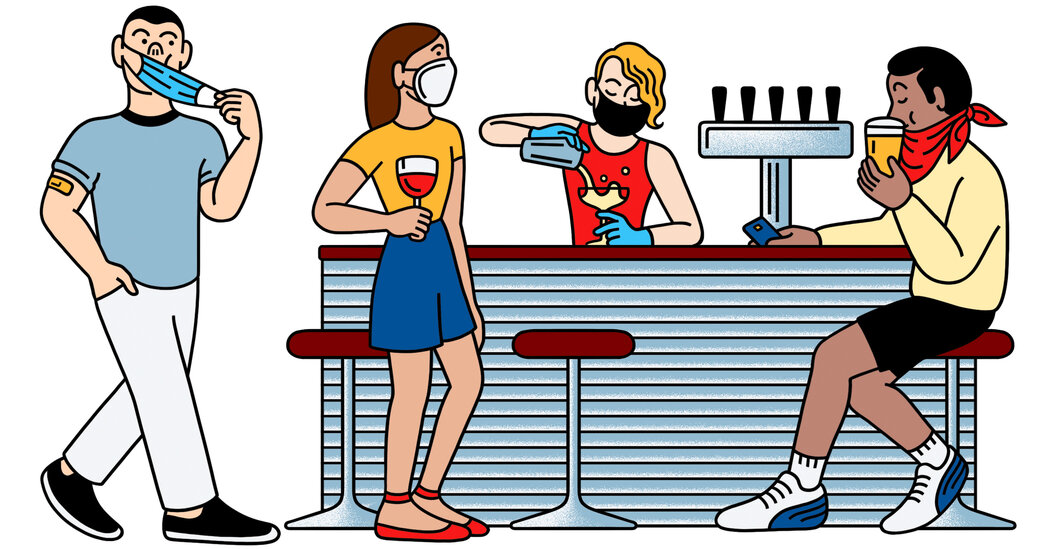 My wife and I are participating in a clinical trial for a Covid-19 vaccine. We had no antibodies before we received the vaccine, but we now have a lot of them, according to two independent tests. Presumably we are like millions of others who have recovered from Covid-19 and have these antibodies, and so are immune for some time.

At what point can I feel comfortable, ethically, not wearing a mask, being with others who haven’t had Covid, eating at a restaurant, going to a bar, traveling to locations with restrictions on “hot spot” visitors and the like?

First, thanks for volunteering for the clinical trial. We all owe a great deal to the many people around the world who are participating. But let’s not get out over our serological skis. If an antibody assay proved that you were immune to the coronavirus, there wouldn’t be any need to subject vaccine candidates to Phase III trials, which assess not just safety but also efficacy. Currently no vaccines for SARS-CoV-2 have completed these trials, which would establish that they significantly reduce a recipient’s chances of infection. The F.D.A. has said that approval will require a vaccine to show that it prevents infection or reduces its severity in at least 50 percent of those who receive it. Antibody results themselves wouldn’t suffice, according to F.D.A. guidance, because it isn’t yet known which antibodies at what levels are protective.

Let’s review a few more factual considerations. Specific antibodies target specific segments (“epitopes”) of a protein. The major American vaccine candidates, which focus on the coronavirus’s spike protein, might not give you as rich a complement of antibodies as those produced by someone who had actually been infected with the virus; the virus is more than its spikes. And acquired immunity doesn’t just arise from the antibodies in our serum; it involves white blood cells, such as killer T cells, that have been, in effect, trained to deal with the threat. As my medical colleagues remind me, recovered Covid-19 patients might be expected to have levels of cellular immunity that some vaccines may not trigger. (A few vaccines, notably one for HPV, may produce a better immune response than natural infection does, but usually it’s the other way around.) Going by available data, one well-funded vaccine candidate seems to produce only a weak cellular response. It might still work wonderfully well, but results in the test tube are no substitute for results in the field. And what’s expected of a good vaccine is that it would reduce your odds of infection (albeit in ways that, once vaccination is widespread, could lead to herd immunity), not that it would eliminate them.

Even if your optimistic assumptions were borne out, though, you should still join others in wearing a mask in public places. After all, people aren’t going to know why you aren’t wearing one. They may infer that you’re antimask or fear that you might pose a threat to them. At the same time, you would be eroding an important social norm. Whatever your personal risk profile, wearing a mask signals your support for a practice that can save lives; it helps maintain a public realm in which all of us do our share to contain transmission. For the same reason, you should continue with social distancing in public places.

Don’t give up on hand hygiene, either. At least in theory, your hands could transfer the virus from a surface to someone else’s hands. So regular hand-washing remains a good idea. (With additional benefits as we come into the usual season for colds and flu.)

None of this is to say that — bearing in mind all the caveats — you shouldn’t engage in the permitted activities you mention, like dining out and travel. Diminished economic activity has bad effects on the welfare of many, which includes costs in health. Will these treats be a reward for the good deed of being a guinea pig? That isn’t how I would look at it. But doing so would be a positive contribution to the recovery.

I recognize that the choice to eat out is already a great privilege in this time of massive dislocation and lost livelihoods. My quandary concerns the conditions under which it is ethically appropriate to do so (of course, masked, outdoors and six feet apart from other diners). On the one hand, I recognize that those who work in restaurants (bar, front of house, line cooks, etc.) are likely working because they depend on these wages, i.e., they must. On the other hand, I recognize that they would likely prefer to work remotely, as those privileged enough to have the option can do, and I do not want to support this multitiered wage-class system. I also recognize that contributing to sustaining local business — owners as well as the employees who depend on wages to sustain themselves — is important right now. Eating out seems as problematic as eating in, since those who prepare the food are equally at risk. How would you think through the ethical course of action? Name Withheld

If you follow the rules when you dine outdoors, you’re not putting the health of those around you at great risk. Your worry is that you might be exploiting those who work in the restaurant by putting them at risk. To minimize that possibility, go to restaurants whose reopening was contingent on meeting conditions set by the local public health authorities. Dining at a restaurant, in those circumstances, helps support the livelihoods of those it employs. Even if the members of the staff are working there only because they need the money — as was surely the case in the pre-pandemic period — they aren’t necessarily being forced to take unacceptable risks. That’s why it need not be especially exploitative. Extra tips are probably appropriate at the moment, too. People in the service industry have mostly been out of work for a while.

You make a fair point about the relationship between your ability to work from home and your place in the socioeconomic hierarchy, although the picture has its complications. While remote work may be entirely possible for the meagerly paid data-entry clerk, the high-living cosmetic surgeon whose Botox brow lifts have extended the acting careers of his Hollywood clients can’t work from home. Neither, for that matter, can most of those clients. It’s also the case that for many people in the hospitality industry, contact with clients and customers (and fellow workers) is one of the pleasures of the job. The home office is not everybody’s ideal.

Of course, you ought to treat those who serve food and drink in ways that presume your social equality with them. Withholding your patronage, though, is probably not the way to do so. Ours is a class society in some unacceptable ways, but I don’t think that the very existence of service businesses is one of its problems.