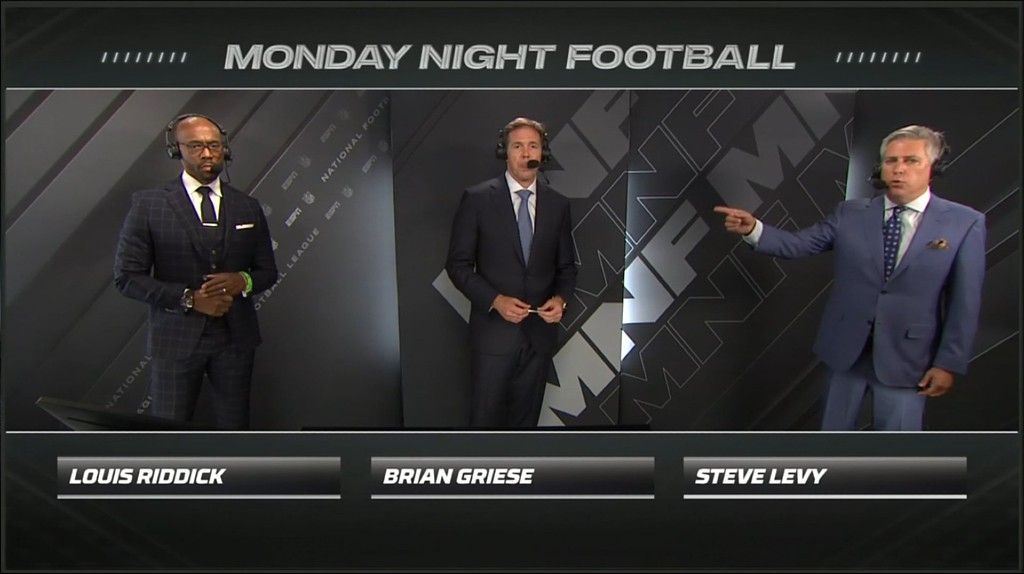 For the third time in as many years, ESPN entered the NFL season with a new crew in the Monday Night Football booth, and, hopefully, that streak ends this year.

Steve Levy, Louis Riddick, and Brian Griese weren’t necessarily ESPN’s first choices, as the Worldwide Leader reportedly chased big names again, most notably their white whale, Peyton Manning, and a reported offer to NBC to send Al Michaels back to Monday nights. However, while they had to shift to Plan B it has likely created the best product they’ve had in a long time, as the group was sharp, informative, and insightful in their first game together — the bright spot in a game that was otherwise a slog between the Titans and Broncos.

It wasn’t a major surprise that this was a solid broadcast, as Levy is the consummate professional, calling everything from college football to the XFL for ESPN in recent years. Griese has always been sharp in the booth on college football games, while Riddick emerged as a star on ESPN’s studio shows. However, the question was how they’d mesh as a group, given that’s been an issue in the post-Gruden era for the Monday Night Football booth. We got an emphatic answer on Monday night, as they were smooth, didn’t step over each other, and provided terrific insight into the game.

What made them so good is the interplay between Riddick and Griese, two brilliant football minds who were quick to point out things they saw on the field and explain why that led to what happened on that play. It was incredibly refreshing to hear that level of football conversation on a broadcast, as they managed to thread the needle of getting into coverages, alignments, schemes, and play design without it feeling like they were either talking down to the viewer or speaking at too high of a level for a more casual fan to understand.

It’s the hardest thing to do on a broadcast, point out what you see and explain it in a concise and efficient manner to allow you to get to the next play, but they did it expertly. Griese’s booth experience was clear as he often took hold of the telestrator immediately after plays to break down plays quickly, and Riddick’s insight was sharp and on time when it was his turn to dissect a play. They seemed to thrive off of being able to hold a conversation about these things with one another, bouncing off the other and letting it facilitate better, more thorough analysis than what is often possible in a two-man booth.

For Levy’s part, he was exactly what those two needed. As he told me during the XFL season when they were experimenting with more on-field sound on the broadcast, his job was simple: call the action and get out of the way as the coaches, players, and his partner Greg McElroy broke things down. On Monday, that ethos paid dividends as he didn’t try to interject himself too much in the conversation between Riddick and Griese, letting the experts explain the action, teeing them up on talking points, and kept the broadcast moving.

There were hiccups at times, as happens, with some confusion about things happening on the field, but for the most part it was a great opening broadcast, certainly as good as ESPN could’ve hoped for and was refreshing to see as a viewer. As the season wears on, it only figures to get better, and hopefully this is the last booth shake up we see for some time because this group has the goods.