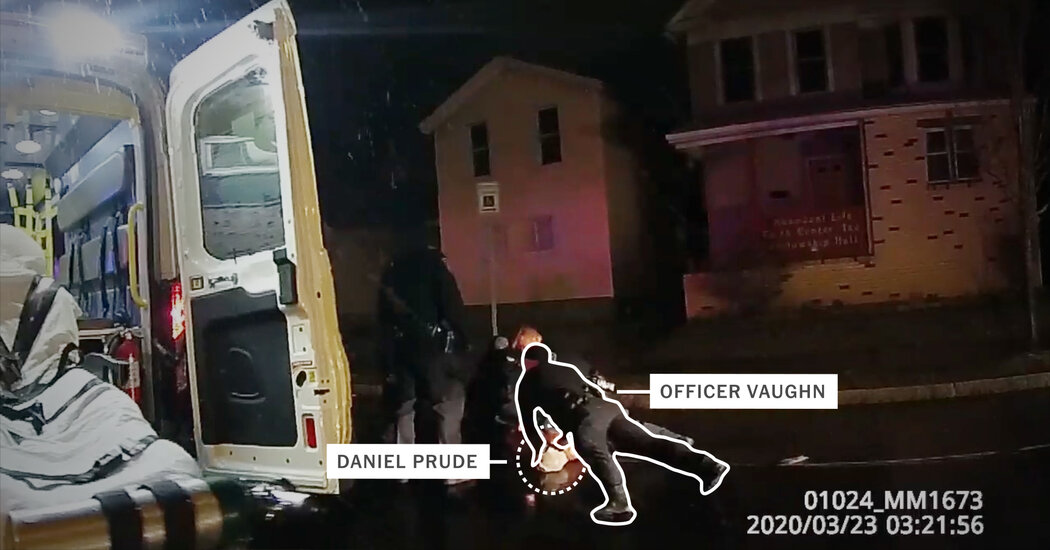 The images of police officers in Rochester, N.Y., putting a hood over the head of a Black man who later died of suffocation spread rapidly throughout the country.

But another troubling moment from that encounter is now also attracting attention: an officer on tiptoes, leaning forward and using his full weight to push down on the prone man’s head.

The officer was leaning on the man, Daniel Prude, so heavily that Mr. Prude seemed to think someone was standing on his head.

“Get your feet off me!” he shouted before his words became garbled grunts.

The officer, Mark Vaughn, maintained this position for at least 68 seconds, according to an analysis of multiple police body cameras by The New York Times.

Officer Vaughn later wrote a report of the incident, in which he said that in an effort to subdue Mr. Prude, he “segmented his head.” A paramedic who arrived at the scene told investigators he saw the officer “tripoding” Mr. Prude’s head.

The technique, when used properly, is meant as a quick, effective way to subdue a noncompliant person, a method taught to new officers in most every city, county, town and village in New York as part of a statewide police curriculum.

But a New York Times analysis of Officer Vaughn’s actions suggests that it may have been misused that morning — on a man already in handcuffs, with any visible signs of distress on his face hidden by a hood.

Some law enforcement experts who reviewed the footage of Officer Vaughn’s actions said the technique appeared dangerous and excessive, given that Mr. Prude was already handcuffed and immobilized.

“I find it absolutely shocking,” said Philip M. Stinson, a criminal justice professor at Bowling Green State University, and a former police officer. “To me, that is the application of deadly force.” He added: “I’m not familiar with any police training that would permit such a maneuver.”

Others defended the officer’s actions, suggesting that he may have feared Mr. Prude, who had minutes earlier said that he had the coronavirus, was attempting to infect him and others.

Mr. Prude, 41, of Chicago, had arrived in Rochester on March 22 to visit his brother. He was ranting and behaving erratically, and his brother, Joe Prude, had him hospitalized for evaluation. Mr. Prude was released hours later, and the following morning, took off into the streets, apparently under the influence of PCP, his brother told the police.

Officers found him naked and incoherent, and handcuffed him without incident. He had told at least one passer-by that he had the coronavirus, and when he ignored officers’ orders to stop spitting in the street, he was fitted into a hood known as a spit sock.

After Mr. Prude, still handcuffed, struggled to get to his feet and demanded a gun, three officers pinned him to the ground, with Officer Vaughn at his head. He had to be resuscitated at the scene, and died at a hospital a week later.

On Monday, Mayor Lovely Warren released an internal report documenting how the police repeatedly characterized the death as a drug overdose in communications with the city. The report, over 300 pages long, did not indicate that anyone questioned the segmenting maneuver performed that morning.

With the release of the report, Ms. Warren abruptly fired the police chief, La’Ron Singletary, two weeks before he was to step down in the wake of Mr. Prude’s death.

Seven officers involved in the encounter with Mr. Prude, including Officer Vaughn, have now been suspended, and the state attorney general has announced she is empaneling a grand jury to review evidence in the death.

A man answering a call to a family home on Monday said Officer Vaughn was being treated unfairly and hung up.

The Prude family, in its federal lawsuit against the City of Rochester and the officers involved, highlighted Officer Vaughn’s three-point posture as he held Mr. Prude’s head, and included an image from the camera footage.

“Mark Vaughn pushed down on Mr. Prude’s head with his full body weight — essentially doing a triangle push-up on his head — for over two minutes until he stopped breathing,” the lawsuit states. “The video shows that Mr. Prude is not resisting or fighting with officers in any way.”

The Prude family’s lawyer, Elliot Shields, said he has had numerous cases involving the Rochester police, and has never seen the term “segmented” before.

The Rochester Police Department, reeling after the sudden resignation or demotion of most of its command staff, declined to comment on the maneuver, citing the lawsuit.

Most new police officers in New York are taught basic defense tactics that include restraining a person’s head and body, using a curriculum developed by the Division of Criminal Justice Services.

One tactic is known as segmenting, when two officers restrain a noncompliant person by pinning him at the waist and head.

The officer handling the head is trained to turn it to the side and press down around the ear to avoid disrupting air flow; the position is supposed to be maintained in a squatting pose, knees bent, to maintain agility, according to a law enforcement official familiar with the curriculum, who asked that his name be withheld because the case is under investigation.

Officer Vaughn may have been referring to this technique when he wrote that he “segmented the head,” but his rigid plank posture, with all his weight on the head, differs from training.

Importantly, segmenting is designed to be used to subdue a person so that he can be placed in handcuffs — not after the person is already shackled, as was the case with Mr. Prude, the law enforcement official said.

The New York City Police Department, which uses its own curriculum to train its new officers, “does not train in utilizing this technique at the Police Academy, to our recruits or to our in-service members,” according to a department spokesman, Al Baker. He declined to comment on Officer Vaughn’s actions.

“What you’re trying to do is just get this person under control,” said Joseph L. Giacalone, a retired New York City police sergeant and an adjunct professor at John Jay College of Criminal Justice. “This person is saying he has Covid and he’s spitting. The officer is trying to keep his mouth away from everyone else.”

The pressure on the head did not appear to Mr. Giacalone to hamper Mr. Prude’s breathing, he said. “Although it looks terrible, it’s not going to affect your breathing,” he said. “It might not be comfortable.”

A former New York City detective saw a different reason for using a straight-leg position as the snow fell that morning: “That’s a move to keep from getting wet.” But the former detective, who spoke on the condition that his name be withheld because he said it would be improper to speak about another officer’s practices, said the move did not appear dangerous.

“It would not impede your breathing in any way,” he said.

“That seems highly problematic,” Seth Stoughton, a former police officer who studies policing and is a professor at the University of South Carolina School of Law, wrote in an email last week. “That position puts a significant amount of an officer’s body weight onto the subject’s head.

“There are ways to limit someone’s movement by holding their head, but they are generally appropriate only before the subject is secured in handcuffs,” he continued. “Because of the potential for injury, you use the head only when other options are not available.”

The Rochester Police Department has already cleared its officers in an internal investigation, finding that they acted in a manner “consistent with their training.” The police union has stood by the officers and also said they handled a mental-health call as trained. The union’s president, Michael D. Mazzeo, did not return calls for comment.

Professor Stinson flatly condemned the move, which he called “horrific.”

“I’ve never seen anything like that,” he said, likening the maneuver to “extrajudicial punishment and pain to teach someone a lesson.”