Dave Brailsford has rejected suggestions that he gambled with his Tour de France selection by discarding Geraint Thomas and Chris Froome, but admitted that the dominance of Primoz Roglic and his Jumbo-Visma team will force the Ineos Grenadiers back to the drawing board.

“I don’t gamble,” Brailsford said. “People are entitled to their opinions, but I didn’t gamble with selection. They were big decisions. Sometimes they work, sometimes they don’t. I’m sure that people have a lot to say but they’re not privy to the facts that I’ve got.”

“It was a good decision, regardless of what anybody else may think,” Brailsford maintained of the non-selection of Thomas and Froome. “Chris is where Chris is at. He’s just not ready yet for this level of competition and I think he knows that himself. He’s doing a fantastic job of getting back to where he needs to be, but on both of those fronts, we will go back and see what we can learn.”

“I’d never judge myself on somebody else’s narrative, to be honest. I think we will look back at what information we had at the time – did we get it right, did we get it wrong, can we learn – but I’m actually very pleased to see Geraint doing so well at Tirreno-Adriatico and looking so good going into the Giro d’Italia.”

In Tuesday’s 16th stage into the Vercors mountains, his selected team leader, Egan Bernal, again struggled and lost yet more time, furthering rumours that the defending champion might soon quit the race. “We are monitoring him carefully,” Brailsford said. “He’s not in pain. It’s more a case of assessing what went wrong, which is what we are doing.”

“Clearly there was something wrong because that wasn’t his normal performance on Sunday. He wouldn’t normally be out of that lead group – he might be 30 seconds better, 30 seconds worse – but he’d be in the mix. But he’s proud, it’s not in his nature to quit.”

“He’s had a successful young career, and not many come back after winning their first Tour and immediately win again. He’s very mature, talented and capable but he’s still only 23.” 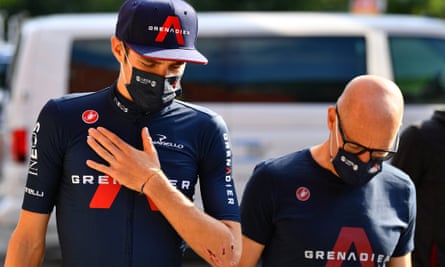 In the 164-kilometre stage from La Tour-du-Pin to Villard-de-Lans, over five categorised climbs, Lennard Kämna, of Bora-Hansgrohe, stage winner in Megève during August’s Critérium du Dauphiné, soloed clear of the day’s breakaway to victory. Ironically, the last man he dropped en route to his success, was Ineos Grenadiers’ Richard Carapaz.

Behind the 24-year-old German stage winner, the Jumbo-Visma team again smothered Roglic’s rivals, and Brailsford admitted that he and his own team, after a decade of success in Europe’s Grand Tours, had finally met their match.

“Jumbo have been building that team for three or four seasons and it’s great to see it. I admire what they have done, and they’ve got my utmost respect. Have we got to go back to the drawing board? Totally – and that’s quite exciting in some respects. We’ve got to put together a team and a coaching staff that can deliver and try and win the race again.”

He accepted, however, that multiple challenges – the pandemic forcing a disrupted calendar, the change in sponsor in April 2019 from Sky to Ineos, and most critically, the loss of sports director Nico Portal, who died suddenly last spring – may have been too much to manage.

“Certainly, stability helps,” he said. “We’ve changed structure, changed owners, and you need to know you’ve got that stability to build again. I wouldn’t underestimate the impact that losing Nico has had. He grew up with the team and he played a key role. If you lose that you have to adjust to it and that’s going to take time.”

For now, however, despite Bernal’s capitulation, Brailsford says the billionaire team owner, Jim Ratcliffe, remains supportive. “He knows it’s part of sport. Look, he won it last year at the first time of asking, so I think he understands.”

In Tuesday’s stage the main group of contenders, happy to let a 23-strong breakaway have their fun up ahead, came across the line almost 17 minutes later with race leader Roglic and Tadej Pogacar locked together to maintain the 40-second gap between them.