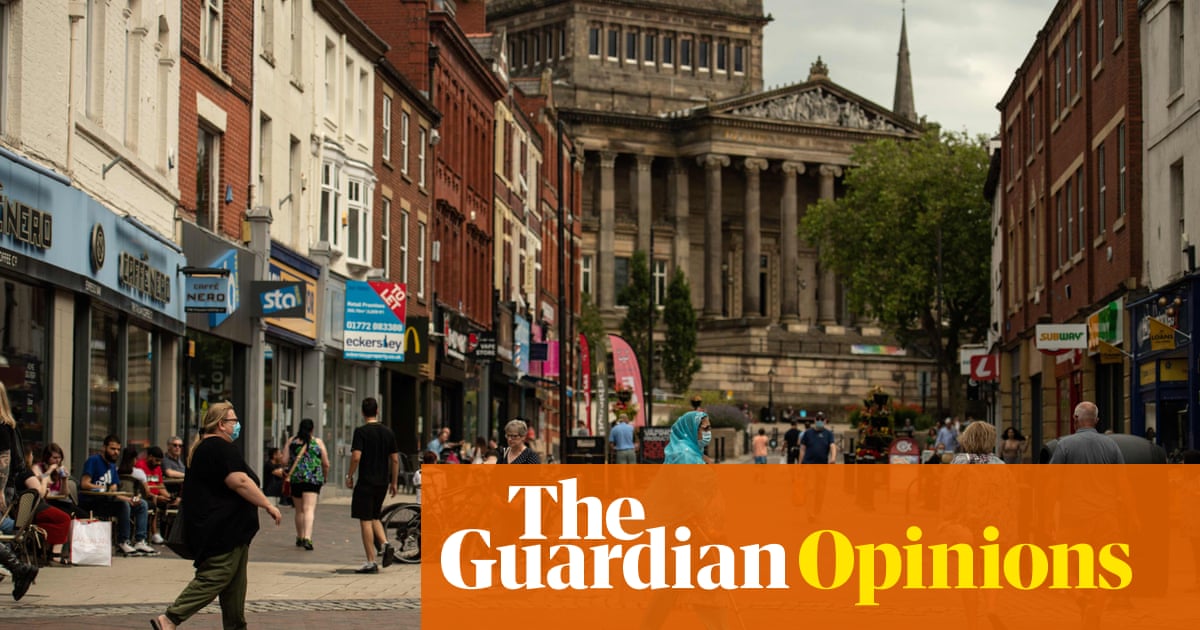 Coronavirus is changing the way we live in cities. Many people are now working from home and spending more time in their local communities. While some smaller businesses have reported they are thriving, urban centres are struggling to survive.

The benefits of this drop in commuting for carbon emissions, health and wellbeing are at odds with the financial model that has long underpinned city centre economies. It’s no surprise that the arbiters of financial capitalism have insisted that workers must return to the office. But what if instead of resisting these profound economic changes, we embraced them and built something better than the urban economy of the past?

For the last two decades, English urban policy has focused on what’s known as “agglomeration”, or the spatial concentration of economic activity in cities. This approach to urban development has long treated city centres as convenient and easy landing points for global financial capital. It’s naturally appealing to global investors, who crave speedy and easy financial returns built around the sure-fire bet of land and property development. Agglomeration is the reason our cities have densely concentrated networks of offices and financial centres, and why people in London, the UK’s main financial centre, spend an average of 81 minutes a day commuting into work.

Advertisers love agglomeration because it fuels an urban buzz they can seize upon to grow demand. But as land and property values increase, local people are often priced out of areas and urban culture is eroded. Instead of vibrant high streets with a diversity of local businesses, we get areas with multiple franchises of the same chains. Against a backdrop of loosened municipal planning policies and low corporation tax, city centres become little more than places for wealth to be extracted and funnelled into the bank accounts of global investment companies and their shareholders.

As the urban geographer David Harvey said, “the accumulation of capital and misery go hand in hand, concentrated in space”. And this is what our cities have become – cathedrals of steel and glass, towering over a country riven with inequalities and growing pockets of poverty.

Criticisms of this dominant approach are usually met with the resolute claim that “there is no alternative”. Of course there has been some resistance to this model, such as the recent Land Commission set up in Liverpool City Region, but the planning departments of English councils have been so enfeebled by austerity that they are often flimsy and ineffective in the face of huge financial investments brokered by slick and well-resourced developers.

And these problems don’t just affect big cities. Part of the justification for agglomeration is that wealth generated in city centres will eventually “trickle outwards” as investors look for cheaper opportunities – hence Boris Johnson’s assertion in 2016 that a “pound spent in Croydon is far more valuable to the country than a pound spent in Strathclyde”. But in reality, this model has skewed investment, directing it away from manufacturing and other industries that still make up the bulk of employment in towns and outer city areas. As a result, many areas across the country – despite being ready and hungry for it – remain starved of investment.

Despite the pain it has inflicted, the pandemic may have done us a favour by disrupting this financial juggernaut. For far too long, our cities have been handmaidens for wealth extraction. The government is backing financial power and banking on getting us back to the “old normal”. Rather than clinging to the past, we should be seizing this opportunity to redefine our cities and who they work for.

Progressive economic approaches like community wealth building, which is being adopted in areas such as Preston, North Ayrshire, Newham and by the Scottish government, returns more economic power to local citizens. Unlike the hollow promises that investment will trickle outwards, community wealth building focuses on the predistribution of wealth before it’s even created, designing systems that lock wealth into local communities. Through the growth of small businesses, cooperatives, employee-owned companies and community banks, this approach stems the flow of wealth before it disappears into the ether of the global economy – and the bank accounts of distant shareholders.

The pandemic has been devastating, but it could be an opportunity to build a better economy, one in which more of the wealth generated in cities is more fairly distributed and owned by us. This would require a serious national industrial and spatial plan, with a full-blooded regional and urban devolution policy. Rather than ignoring the structural changes in our midst and clinging to a model of wealth extraction and property appreciation, we should be seizing this opportunity to build an urban economy that works for ordinary people rather than global shareholders.