The facelifted 2021 Jaguar F-Pace has just been unveiled and brings with it a number of styling updates, various interior changes, and the availability of a range of new engines, including a mild hybrid.

Visual updates start at the front end and include a set of new all-LED headlights with what Jaguar refers to as ‘Double J Blade’ daytime running lights. These new headlights flank an enlarged grille and include Standard High Beam Assist that uses the forward-facing camera.

Elsewhere, the British SUV features a sculpted hood and revised side fender vents. Rounding out the modifications are some changes to the rear fascia, including new taillights with a Jaguar double chicane graphic. The bumper and tailgate have also been redesigned.

The interior of the 2021 F-Pace has been thoroughly updated sporting a new 11.4-inch curved-glass HD touchscreen cased in magnesium alloy and using the company’s latest Pivi Pro infotainment system. This system supports Apple CarPlay and Android Auto, as well as the ability to connect two phones simultaneously via Bluetooth. The entry-level F-Pace 250 variant to be sold in the U.S. will feature a simplified Pivi infotainment system that supports navigation functionality but only through the driver’s smartphone. 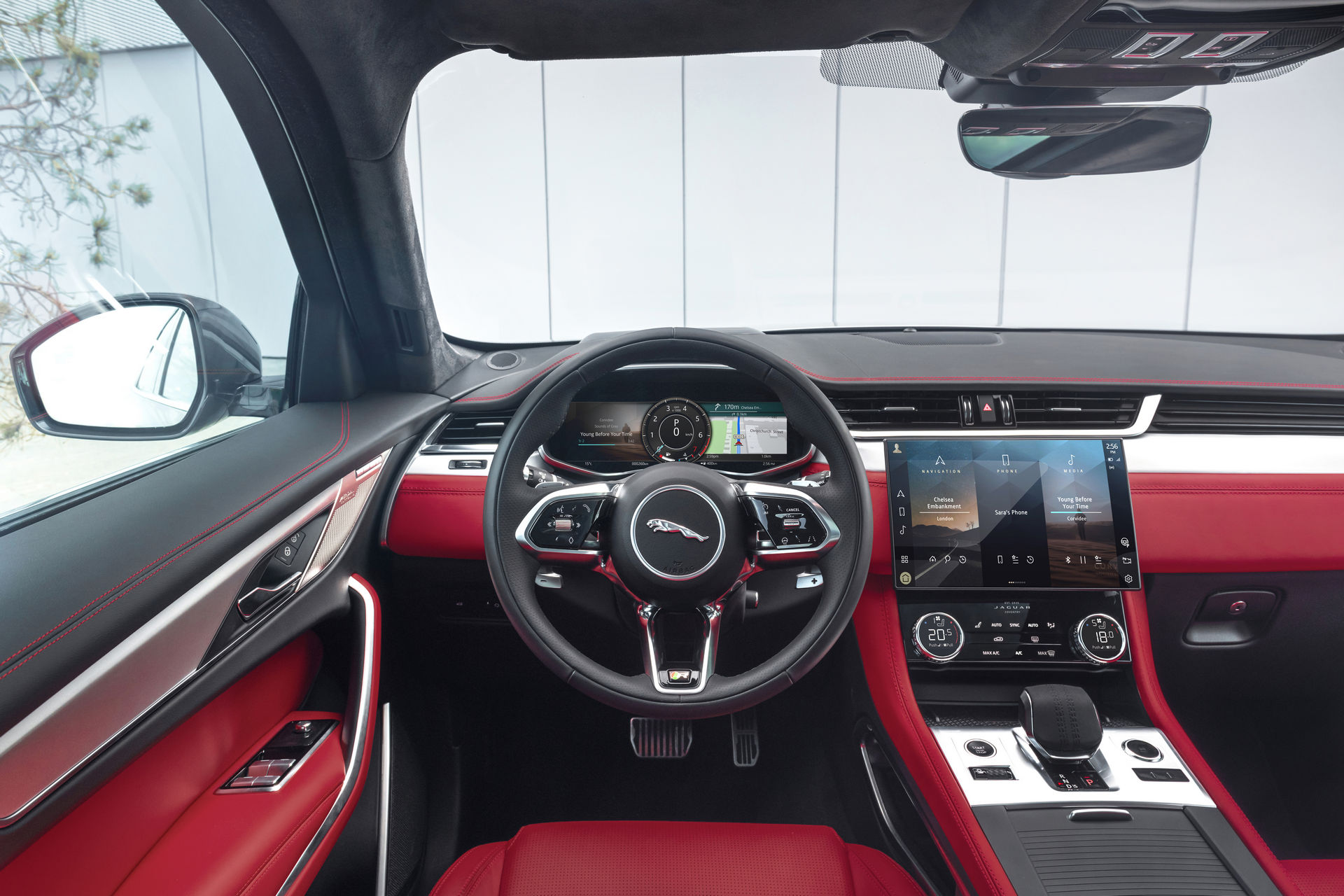 Joining the new infotainment screen is an available 12.3-inch HD Interactive Driver Display with enhanced graphics and a configurable layout that includes full-screen 3D mapping. Various other updates have been made throughout. For example, there are new open-pore wood veneers and aluminum accents, a new Drive Selector, soft-touch materials, a new center console, new seats with heated and cooled functions, and a new ambient lighting system. The F-Pace also includes Active Road Noise Cancellation and Engine Noise Cancellation.

Adding to the appeal of the new F-Pace is the fact that it uses Jaguar’s Electronic Vehicle Architecture that allows for over-the-air software updates.

The engine range in the USA

The new F-Pace will be sold in the United States with three available engines. Sitting at the base of the range is a 2.0-liter turbocharged four-cylinder used by F-Pace 250 and S 250 models and rated at 246 hp. Sitting above this engine is a mild-hybrid 3.0-liter turbocharged and supercharged six-cylinder that includes a belt-integrated starter generator and a 48-volt lithium-ion battery to produce 335 hp. Last but not least is the F-Pace R-Dynamic S 400 that also uses a twin-charged 3.0-liter straight-six MHEV but delivers 395 hp, enough to send it to 60 mph (96 km/h) in 5.0 seconds.

All three engines are paired with Jaguar’s eight-speed automatic transmission and include all-wheel drive as standard. This all-wheel drive system has a rear-wheel drive bias and the ability to vary torque to individual axles almost instantly depending on conditions.

The European market F-Pace will offer buyers a more comprehensive engine range. It includes the P400e plug-in hybrid (PHEV) that produces a combined 404PS (398 hp) from a 2.0-liter turbo-four petrol engine and a 105kW electric motor and which can hit 60mph (96km/h) in 5.0 seconds flat, as well as the latest four-cylinder and new in-line six-cylinder petrol and diesel Ingenium engines. Mild Hybrid Electric Vehicle (MHEV) technology is also available on selected engines for the first time.