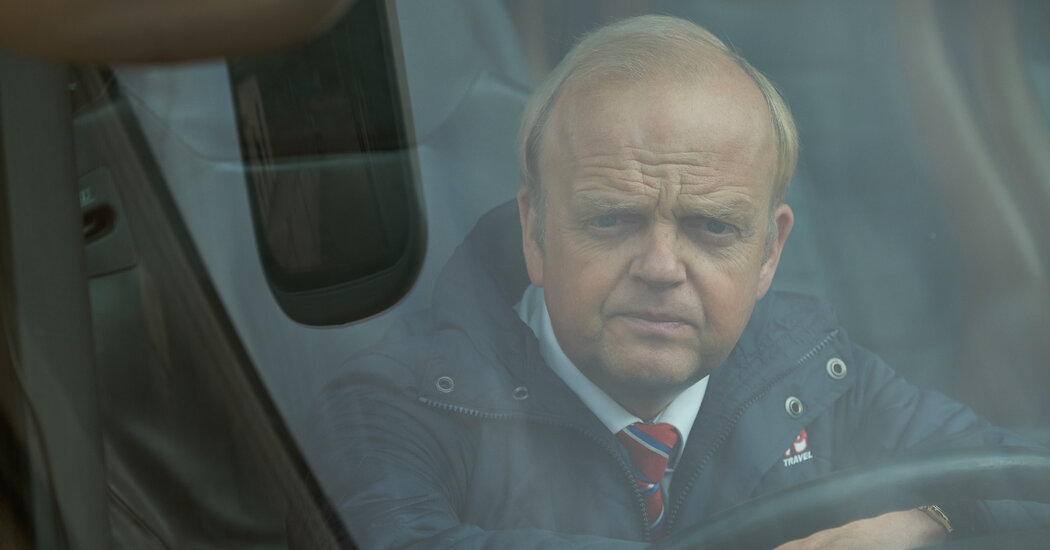 Early in “Don’t Forget the Driver,” Pete Green, a tour-bus driver on England’s southern coast, returns from a day trip across the Channel and discovers he’s picked up a stowaway, a frightened young African woman. It’s a chance for him to do some small thing outside the sad orbit of his daily life, something decent and possibly heroic. And it’s absolutely terrifying — after a weak attempt to assist, Pete has to stagger away and sink to the ground.

If helplessness and disorientation are your primary responses to the world we find ourselves in, “Don’t Forget the Driver,” a melancholy BBC comedy premiering Tuesday on the streaming channel BritBox, should speak to you. Pete, played with microscopic gradations of acerbity and unease by the wonderful Toby Jones, has spent years staying out of the world’s way, stitching himself a small cloak of invisibility. But across the show’s six episodes (a second season has been ordered) he rallies, rising to a particularly modern occasion with a stumbling, slightly oblivious but undeniable courage.

Jones and the playwright Tim Crouch, the show’s creators and writers, began work on “Don’t Forget the Driver” five years ago, and Brexit is never mentioned. But the fate of the stowaway, Rita (in an alert and graceful performance by the Eritrean actress Luwam Teklizgi), is both the engine of the modestly screwball plot and an element of abiding anxiety, an intrusion of the collapsing world order into the sunny, bland streets of Bognor Regis. Corpses — presumably of desperate migrants — have been washing up on Bognor’s beaches, unsettling the locals, but Rita is a living and increasingly determined force who has to be dealt with.

One side of “Don’t Forget the Driver” details the slightly sinister but mostly comic travails of Pete and his daughter, Kayla (Erin Kellyman), as they cope with this new, non-English-speaking member of the family. This involves tortured attempts at communication and a few scenes of whimsical action, including a slow-motion chase by Godzilla-like bus drivers through an English-history-in-miniature park.

Those scenes — the elaboration of the standard comedy — are not Crouch and Jones’s strongest. “Don’t Forget the Driver” gets to you, in large part, through its bleakly lyrical depiction of the fading, but in its way still lovely, seaside milieu of Bognor Regis. It’s a frozen-in-time ambience that finds a human counterpart in Pete’s mother (Marcia Warren), who locks herself inside her beach bungalow and her memories and is unable to tell Pete from his loud, annoying twin, Barry (also Jones).

And it succeeds thoroughly in presenting the cramped, just bearable landscape of Pete’s life, the gray zone from he which he forces himself, with a great deal of discomfort and complaint, upon Rita’s arrival. Jones is a master of communicating resignation and surrender in subtle ways that don’t turn you against his character — he seemed to have demonstrated that expertise definitively in “Detectorists,” but if anything he improves on it here. He perfectly calibrates the small but primal happiness Pete takes in his pre-driving ritual: doughnut pillow on the seat, tip jar (“Don’t forget the driver”) on the dash.

Pete’s job is a smart device, sending him out with a different group to a drolly diverting location each episode — Japanese tourists to Hampton Court, British pensioners to war graves and a discount French liquor mart. On the way, he makes stops at a roadside food cart whose proprietor, Fran (Claire Rushbrook), has a more than friendly interest in breaking him out of his malaise.

“Don’t Forget the Driver” doesn’t make the sort of self-conscious claims to relevance that characterize a lot of television comedies right now, but in its distinct evocation of a place and one small but ornery man, it couldn’t be more timely.