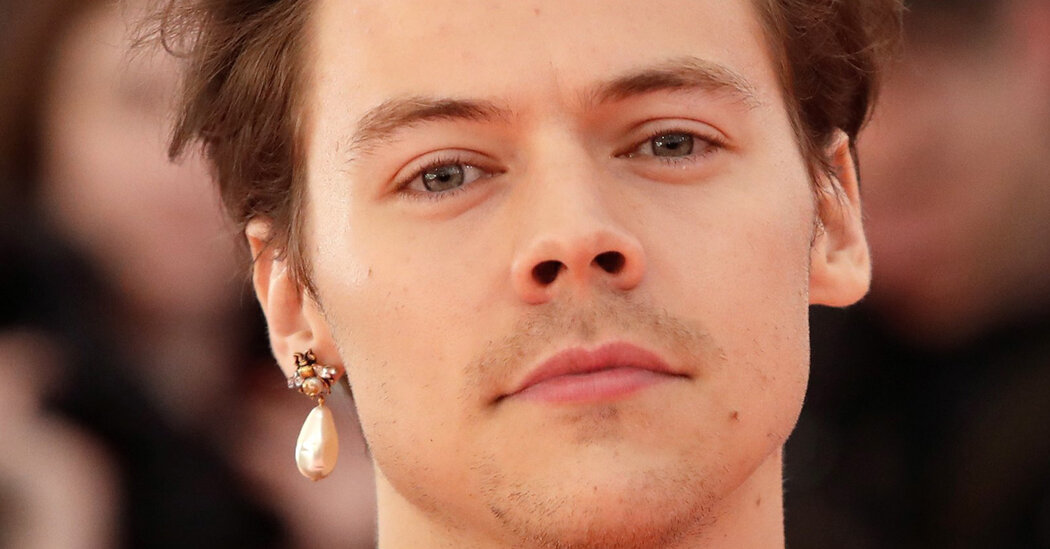 It was on the pink carpet of the 2019 Met Gala that Harry Styles helped reintroduce men to the mollusk. The English former boy-bander, an event co-chair, wore a vaguely Grecian look created for him by the Gucci creative director Alessandro Michele that included a sheer black blouse with a ruffle front and pussy bow, high high-waisted pants, patent-leather heeled boots and a single, perfect pearl earring that owed as much to the theme of the evening — camp — as it did to Rembrandt’s paintings of 17th-century Dutch noblemen (and, yes, Vermeer’s). Since then, Styles, 26, has graduated to wearing a string of pearls around his neck, which he has typically paired with boyish tops: a checkered Marni polo; a Lanvin cardigan featuring Babar the Elephant; an acid-green crew-neck sweater by Magda Archer in collaboration with Marc Jacobs, fellow pearl-necklace enthusiast.

The history of men in pearl necklaces — a perilous internet search, if ever there was one — can be traced to the early 16th century, during the Mughal Empire in India, when long strands could be seen on the emperor Babur and his male descendants. In Europe, Henry VIII wore clothes embroidered with them during his reign as the king of England in the first half of the 1500s. A mourning costume presented to Captain Cook in 1774 during one of his voyages to Tahiti featured a mask and breastplate made of mother-of-pearl. For each of them, ornamentation suggested clout; in that way, pearls predicted a cowboy’s custom belt buckle, a Hollywood actor’s private jet, the boxer Floyd Mayweather Jr.’s fleet of Rolls-Royces.

And yet the reappearance of pearl necklaces on men feels fresh. In addition to Styles, the world of music, specifically hip-hop, has had its share of recent advocates, including Gucci Mane, Swae Lee and Future. As is always the case, the realms of fashion and entertainment egg each other on: On the spring 2020 runway, the American designer Ryan Roche sent out male models in airy, neutral-toned V-necks accessorized with several layered strands. A few months later, at the fall shows in Paris, Kim Jones accessorized his Dior Men turtlenecks and taffeta coats with delicate necklaces and loud brooches as well as elbow-length gloves, and Charaf Tajer added a pop of uptown to his après-sport line, Casablanca. And though the early 20th-century Japanese perliculture pioneer Mikimoto Kokichi arguably halved his revenue stream when he said, “My dream is to adorn the necks of all women around the world with pearls,” his legacy lives on in Mikimoto Comme des Garçons, a fine jewelry capsule collection for all genders — modeled in its advertising campaign by an otherwise buttoned-up young man ready for a day of mergers and acquisitions.

We have seen, in recent years, a heady unraveling of what constitutes men’s dressing; with that, the very illusion of manhood has received a drubbing, too. But a man in pearls, unlike, say, a man in a skirt, doesn’t defy gender so much as buttress a binary. It’s not drag when Troye Sivan or ASAP Rocky performs a song wearing one of these necklaces. In fact, it doesn’t really feel that femme — even as these men are referencing, and then subverting, a symbolic kind of ladylike primness. If anything, the flouting of whatever it means to “dress like a man” suggests an act of expressive alpha sex appeal, in the same way that David Bowie was at his most virile when he put on eyeliner and a skintight striped “spacesuit” to become Ziggy Stardust. Pearls — hard yet smooth, timeless yet trendy, iconic yet rare — offer an introduction to style that allows the wearer to have it both ways. They are a contradiction and a coalescence, a gateway to genderless fashion that emphasizes the very distinction it’s meant to dismantle. Pearls are elevated objects from the bottom of the sea, and they represent exactly what they are: a silky orb that lives inside an armor of rock-hard grit.