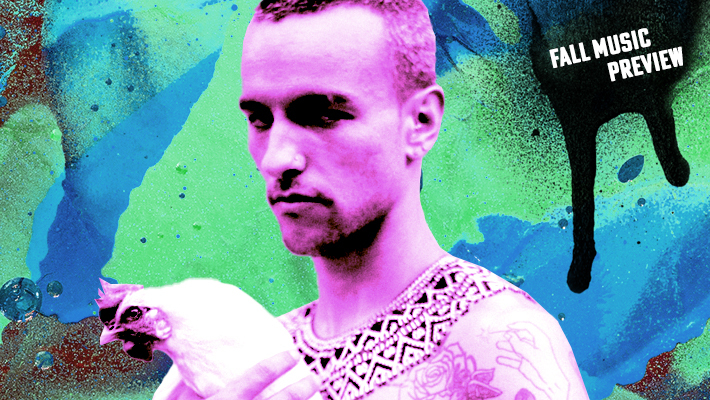 Gabriel Garzón-Montano firmly believes that in this music industry pond that we play in, people have a tendency to box artists in. That the music you made the first time around is inextricably tied to your identity forever and if you veer away from that, it‘s seen as deviant and your motives come into question.

This mechanism haunted him following his 2014 debut EP, Bishouné, and his 2017 Stones Throw Records-released LP, Jardin. Both are gorgeous collections of newfangled R&B with international flair that often saw a hint of Garzón-Montano’s leaning into the roots of his Colombian heritage, but almost a hesitancy to cross over the whole way. This reluctance, he explains, has been grinding away at him until now.

“I got bored of the music I was making, to the point of debilitating depression,” Garzón-Montano says from his apartment in Brooklyn, the borough where he was born and raised. “I was having this identity crisis, beholden to this imaginary, paranoid mind-frame. We’re like 17-sided rocks as humans and they ask us to choose one of those and make it our whole identity. That is so reductive that eventually it bottoms out. So, I’m giving myself permission to try things.”

Now signed to indie-powerhouse Jagjaguwar, Garzón-Montano’s second LP, Agüita, is due out October 2. It sees the auteur flourishing comfortably in cross-cultural experimentations that he calls a “tasting menu” of his arsenal. On tracks like “Bloom” and “Moonless,” he takes a spiritual look at life and loss, namely on the latter, where he seeks to connect with the inner demons left behind by his mother’s passing when he was 17. Lead single “Someone” treads along a comfortable formula as his past work, with funky keys and bass billowing alongside his tongue-in-cheek bedroom imagery of love and longing.

But it’s the second single, “Agüita,” that makes easily the boldest statement of Garzón-Montano’s career. A full-on cumbia hip-hop assault that’s sung in Spanish and produced entirely by Garzón-Montano, it’s not a far cry from mainstream reggaeton cuts like “Azul” by J. Balvin or Ozuna’s “Un Get.” But “Agüita” stands alone with a palpable chip on the shoulder and the pomp of a nascent phoenix trapped in a thick-shelled egg that they’ve been punching away at relentlessly inside, waiting to break through and soar into the world. And that process was a battle for Garzón-Montano, who insinuated that even though he was “turning 30 grand into $700,000,” on previous release cycles, that the industry hasn’t supported who he wanted to grow into as an artist.

“My biggest fear is that people are only lining up to do this thing that we know doesn’t work,” he says. “On a fundamental level, it scares me. And then I get just sidelined with that every time. I’m supposed to sing about what matters to heart, but at your convenience? Do you feel safe enough to listen to my emotions? Until you do something so shocking and unimaginable, that it feels like the only way to break that is through such intense planning and preparations that there are moments of delight and perversion; muscular and virtuosic control of aesthetic.”

The photography and visuals surrounding Garzón-Montano’s releases have always been committed to building that distinct aesthetic he refers to (the “Bombo Fabrika” video from 2017 is especially stunning), but it’s never pushed boundaries as provocatively as on the clip for “Agüita.” It opens with the shirtless star atop a water truck spraying a hose into the air that flamboyantly symbolizes and sexualizes the song’s aqueous theme and perhaps even introduces the new persona known simply as “GGM.” He then goes from getting a tattoo on the wheel of a tractor to a dirtbike sideshow in the crude Colombian metropolis of Medellín, before riding atop a white horse in the jungles of Pereira. As the video climaxes, Garzón-Montano dances alongside the fiercely choreographed Mulahttaz dance crew, with cuts from both a cityscape backdrop and a ring of bursting fire columns in the night.

Alongside songs on the album like “Muñeca” and “Mira My Look,” “Agüita” represents a transformation. One that was catalyzed by listening to Latino Urbano music and flat out feeling inspired by it all. “When I wake up, what do I want to hear, what makes me dance and gives me the feeling of victorious celebration?” he asks rhetorically.

“Agüita” ultimately came about when Garzón-Montano was covering Tierra Whack’s “Fruit Salad,” becoming enamored by the beat and stretching it out. He added bombastic hip-hop hi-hats in the style of Migos and Roddy Ricch, and the rimshot from his own track “Keep on Running,” then played with re-harmonizations of Whack’s stylistic hums at the end of syllables. He was energized, but at first, his reticence to attempt to make music outside of his pre-determined norm reared its head once again.

“After a while, I felt like I was singing this beautiful, amazing song by this woman giving me so much inspiration as if I couldn’t make something that could please me in this same way,” he says. “And when I realized that, I saw the problems there. That you’re going to live your life in a version that doesn’t do it. And the only thing I’ve ever seen anybody be truly passionate about is discrediting themselves.”

It’s as if being the child of artistically-minded Colombian and French parents — though growing up identifying as a “white” American — didn’t qualify Garzón-Montano to expand his horizons into new styles of music. Or if being part of an industry segment that catered to a certain audience didn’t allow him to cultivate new ones. But the self-proclaimed perfectionist has finally allowed himself to blossom in that sense and there’s now a diverse appeal that represents exactly who he is.

“My whole thesis is that culture is so up for debate and I’m proving that,” he says. “’Agüita’ is my first rap song and I produced the beat entirely by myself. And if you listen to my other music it sounds like a different person. So I thought that’d be at least a conversation point or at the very most, a huge problem for other people who do the same genres in any area that I do… But I busted my tender nutsack for three years and made the most beautiful music of my life and I’m so loving it. It’s total self-expression and it defied my expectation of me.”