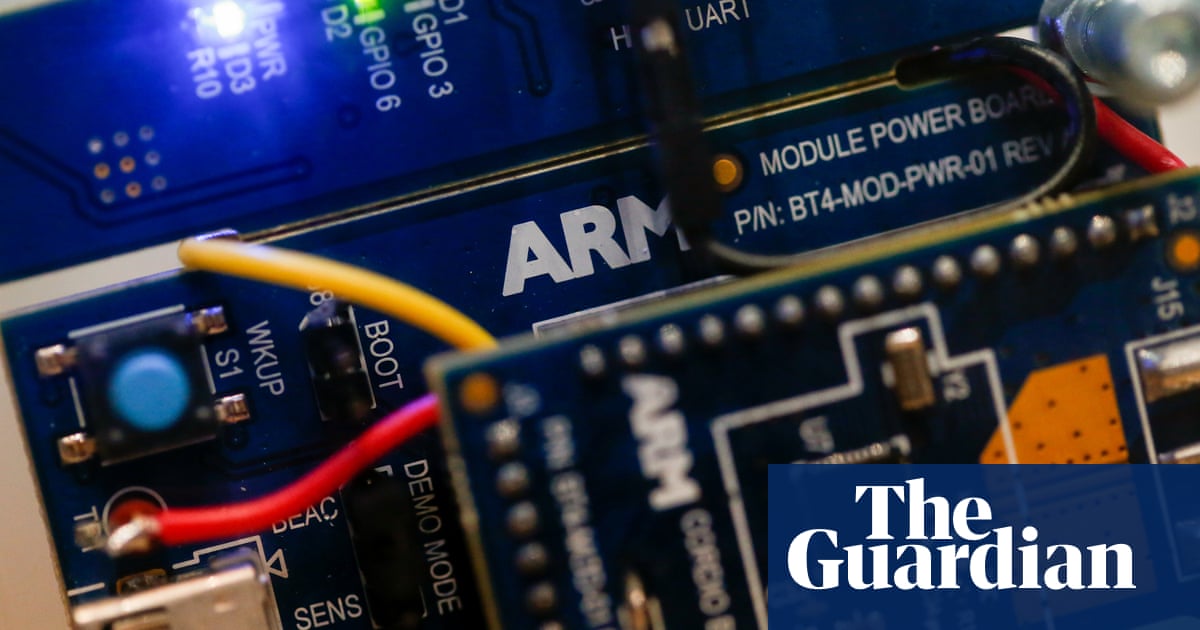 Cambridge-based Arm Ltd was founded in 1990 as a joint venture between Apple, Acorn Computers and VLSI Technology. It designs software and semiconductors – components of electrical circuits that are used to manage the flow of current.

It is not just the UK’s largest tech company but a genuine global powerhouse that has, in the space of 30 years, grown into a $40bn (£31bn) business with more than 6,000 employees.

What’s so great about it?

Its semiconductor chips are the building blocks of a string of consumer favourites. Apple uses them in its iPhone, iPad and Apple Watch products, but you’ll also find Arm chips in the Playstation Vita and Nintendo DS and Wii gaming devices and Garmin satnavs, as well as Sony Ericsson and Samsung Galaxy phones. Its chips are increasingly used in the rapidly-expanding web of connected devices known as the “internet of things”.

In short, unless you live off grid, there’s a good chance you’ve used Arm technology within the last week.

What’s different about its business model?

The company has been described by co-founder Hermann Hauser as “the Switzerland of the semiconductor industry”. It maintains independent relations with hundreds of customers around the world, many of which are rivals.

Unlike some other firms in the industry, such as Intel, Arm does not manufacture, sell and ship its own products, preferring instead to license its intellectual property in return for a fee.

This allows the British company to work with any chip manufacturer, including Nvidia’s rivals.

Nvidia is a multinational US-based technology giant, headquartered in Santa Clara, California, but incorporated in the tax-light and secrecy-heavy state of Delaware. Founded three years after Arm, the company invented the graphics processing unit (GPU), which powers interactive graphics on computers and mobile devices, both for video gaming and for professional purposes. It is led by Taiwanese-American Jensen Huang, who is one of the company’s three co-founders.

The Nasdaq-listed firm is valued at $338bn, more than twice the valuation of the FTSE 100’s largest company, pharmaceuticals giant AstraZeneca.

Are there concerns about the deal?

The sale of British firms to foreign buyers always raises concerns, particularly when targets are genuinely world-leading in their field. In this case, the horse had already bolted to some extent. The business, previously known as Arm Holdings, was sold to Japanese asset-hoovering behemoth Softbank for $32bn in 2016. The Conservative government hailed the deal as a vote of confidence in post-Brexit Britain, although it was partly facilitated by the fall in the value of the pound after the referendum, which made Arm cheaper for Softbank.

The Japanese investment firm’s sale to Nvidia for $40bn – for a cool $8bn profit inside four years – has sparked fresh anxiety about the loss of jobs, intellectual property and British ownership of a strategically important business.

Some of the loudest misgivings come from Hauser: “It is very much in Nvidia’s interest to kill Arm,” Hauser told the Guardian, likening the deal to a sale of Trident, the UK’s nuclear capability.

He described the takeover as an “absolute disaster” which would destroy the company’s business model and lead to job losses at its Cambridge headquarters and elsewhere in the UK.

Ed Miliband, the shadow business secretary, said the government should seek “legally binding assurances” from Nvidia that it would not move Arm’s headquarters out of Cambridge.

What does Nvidia say?

Nvidia boss Huang has sought to allay such fears, promising to keep the Arm brand and expand its Cambridge HQ.

“We will expand on this great site and build a world-class artificial intelligence research facility, supporting developments in healthcare, life sciences, robotics, self-driving cars and other fields,” he said.

Can the government stop the deal?

Under the Enterprise Act 2002, ministers can block deals that posed a threat to national security, media plurality and financial stability. Since the pandemic, deals that could threaten the UK’s Covid-19 response have been added to the list, via hastily-drafted legislation.

The culture secretary, Oliver Dowden, is thought to be considering whether to “call in” the transaction for a review by the Competition and Markets Authority. If he does so, it is likely to be on national security grounds, given Arm’s role in supplying the defence industry.