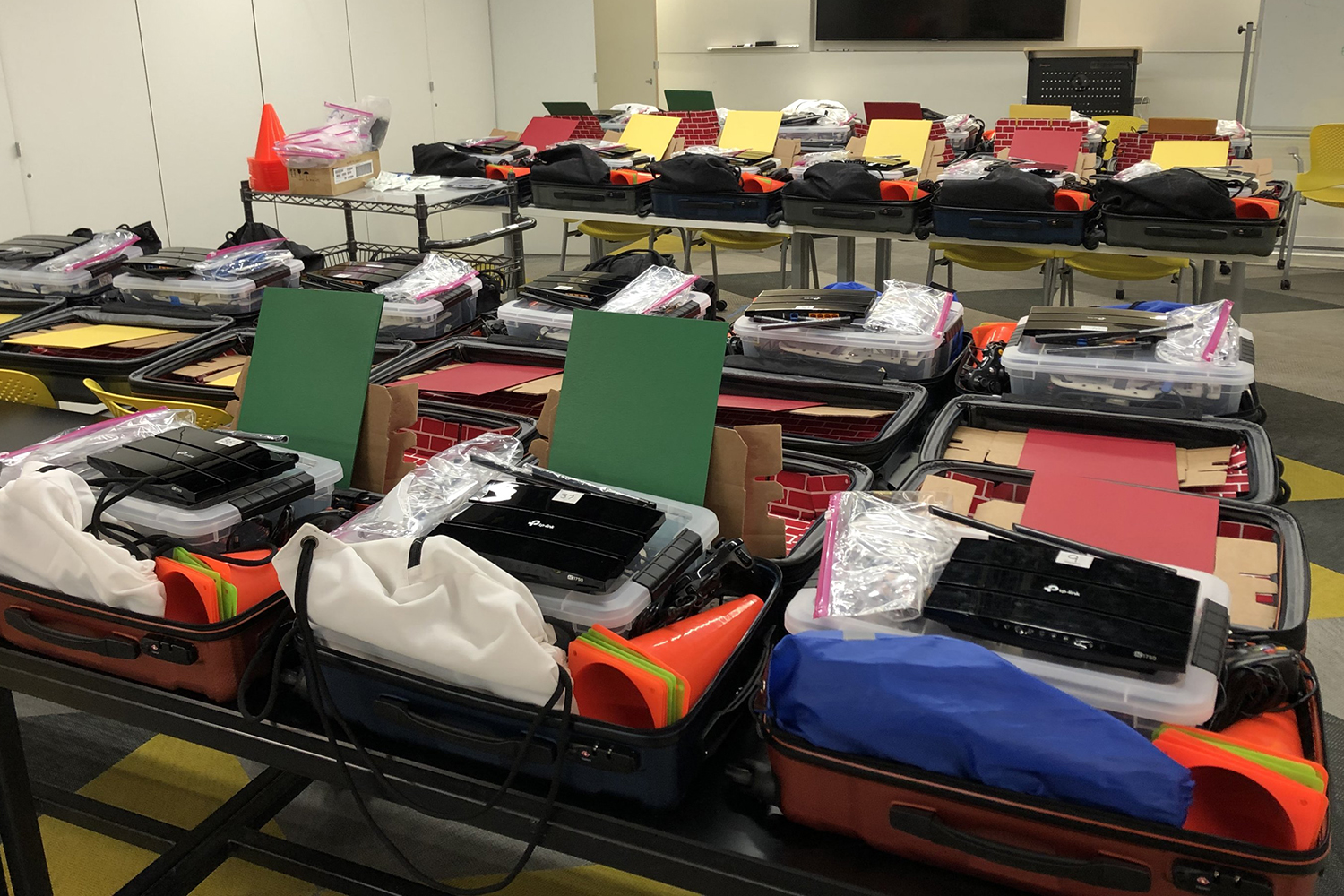 Despite the Covid-19 emergency, this year’s Beaver Works Summer Institute (BWSI) carried on in a virtual format, offering seven classes to 178 students from 26 states across the country and Canada. 2020 marks the fifth year of the program — a four-week hands-on STEM learning experience for rising high school seniors — which concluded on July 31 with a finale event that showcased student projects, a virtual grand prix, awards, and more.

“Even with the virtual format, the students were energized, engaged, and truly committed to their projects,” says Jennifer Watson, who is a coordinator for the program and a Lincoln Laboratory staff member. “Many students not only enrolled in BWSI but also challenged themselves by taking on [a new] independent study project. We could see them transform into teams of confident, collegial students who were very proud to showcase their accomplishments during the final event.”

Adapting to a virtual environment

Lisa Kelley, also from Lincoln Laboratory, is a manager of the BWSI program. She says that adapting the hands-on courses into an online format was a challenge. The RACECAR (Rapid Autonomous Complex Environment Competing Ackermann steeRing) course, for example, delves into the complex field of autonomous navigation, and challenges teams of students to program and race MIT-designed robots. These robots, however, cost up to $10,000 per vehicle.

“Despite the course going virtual, we wanted to still incorporate as much hands-on learning as possible,” says Eyassu Shimelis, a Lincoln Laboratory staff member who was an instructor for the course. “Thankfully, over the last year we had put effort into designing and building a miniature version of the car at about a tenth of the cost. The newer car, called the RACECAR Model Nano, has all of the same types of sensors and computing capabilities, and we had enough to send one to all 21 students in the course.”

Matthew Calligaro and Emi Suzuki — who worked with Lincoln Laboratory to develop a prototype of the curriculum while they were students at Harvey Mudd College — taught the summer course together.

“Once we learned that the BWSI program would be run virtually this summer, we felt that it was critical to create a virtual environment we could fall back on,” Calligaro says. “This would serve as an alternative if students were experiencing hardware difficulties or did not have the physical space necessary to carry out a lab [experiment].”

Calligaro and Suzuki built this environment, called RacecarSim, using the Unity engine. It mimicked the RACECAR Model Nano hardware so that students could run their code simultaneously within the environment, as well as with the physical cars.

“Going forward, RacecarSim will play a big role in improving the accessibility of our course,” Calligaro says. “Students can now complete the entire curriculum with only a computer — greatly reducing the barrier to entry.”

Jeffrey Liu, also from Lincoln Laboratory, taught the Remote Sensing course in which students explored the intersection of data science and disaster response. Although this course did not require mailing any hardware, there were other logistics, such as a field trip to the Federal Emergency Management Agency (FEMA) Massachusetts Task Force 1 (MA-TF1) Urban Search and Rescue team’s facilities, that had to be rethought.

“The team at MA-TF1 put together an excellent virtual tour jam-packed with experts, including from FEMA headquarters and academic partners at the University of Vermont,” he says. “We were even able to use a 3D lidar scan of the MA-TF1 field site to explore the facilities.”

The new Serious Game Design and Development with AI course taught students how to use game design and artificial intelligence to understand and address real-world problems: for example, how a game about zombies could reveal the effects of public health policy on chemical or biological threats. The class was also offered at Lincoln Laboratory’s satellite location on Kwajalein Atoll, where 14 students enrolled.

“During the class, we found that our students had an intuitive grasp of how and why the serious games approach is used, and thus we were able to focus on the experimental design and translating that into code,” says Amna Greaves, a Lincoln Laboratory staff member and an instructor for the course. “Overall, it was a pleasure to be involved with these future engineers and scientists and to see their confidence and teamwork develop. It bodes well for the future of STEM in the U.S. and underscores the need for programs like these to ensure that the next generation is given every advantage to maximize their success.”

Vivian Tao, a student from Noble and Greenough School in Dedham, Massachusetts, who completed the Serious Games course, commented: “What I enjoyed most about the course was working together with a team to create a cohesive final product. I learned a lot about collaborative programming and it was a ton of fun getting to know my teammates and creating a game mod with them. In the future, I will definitely use the project management and teamwork skills I learned from [the course] in all projects that I take on, not only ones that have to do with coding.”

Tao was one of several recipients of a new Dr. Bob Berman Disruptive Innovation Award, which is given to students who make outstanding contributions to their individual teams as well as their class as a whole.

The new independent project option, pi-PACT, was offered to any student who applied to the BWSI program. The project was largely self-directed, and students explored different aspects of the Bluetooth-based Covid-19 contact tracing effort, called the Private Automated Contact Tracing (PACT) application, which was recently developed by staff at the Lincoln Laboratory and from MIT campus.

“Each student was responsible for choosing an aspect of this [application] to explore in-depth and evaluate, for example, collection and characterization of data, in addition to development of algorithms to enable proximity detection between individuals,” says Ramamurthy Bhagavatula, also from Lincoln Laboratory, who was an instructor for the course.

“I really enjoyed the opportunity to have an independent research project that was very relevant to the Covid-19 pandemic,” says Joseph Rosenfeld, a student from Yeshiva University High School for Boys in New York City. “The project has given me confidence that I can complete science experiments from start to finish, including publishing and presenting.”

The BWSI program also hosted several seminars for the students, including a Women’s Network Panel. Seven women from Lincoln Laboratory and from other STEM fields in industry and the U.S. Air Force discussed their career journeys and answered students’ questions.

“Above all, I remember each panelist’s unwavering perseverance and originality,” says Clarise Liu, a student from the Massachusetts Academy of Math and Science in Worcester, Massachusetts, who completed the Data Science for Health and Medicine course. “Nothing held them back from their goals, and no difficulty stopped them from moving forward. I will always remember each of these role models as a reminder that everything life throws is only a new opportunity to grow, improve, and make a meaningful change to our world.”

All in all, the staff describe the program as a success despite the quick adaptation to online learning.

Bob Shin, the director of the BWSI program, says that the push to bring the program online has opened up new avenues for making the course materials available to as many people as possible. The BWSI staff plan to package the lectures into bundles that schools and other programs can use and adapt for their own purposes. In 2021, they intend to run a teacher program to show them how to teach the materials to their own students.

“Our mission to teach both technical skills as well as a project-based approach to learning made us commit early in the pandemic to run a program this year,” says Joel Grimm, who is from Lincoln Laboratory and is a manager for Beaver Works. “The students’ intensity during BWSI was amazing, and their final presentations demonstrate what they learned as a team and in technology. We now have a wealth of recordings that we can use to expand our online prerequisite courses, create asynchronous courses for learners, and expand the number of learners who can use the BWSI projects.”

“Thanks to our amazing staff, this year’s challenges quickly turned into opportunities,” says Professor Sertac Karaman, who is the academic director of the BWSI program and a professor in the Department of Aeronautics and Astronautics. “BWSI will continue to offer high-school courses that are inspired by emerging technologies, such as driverless cars, drones, and 3D printing. Our courses will continue to emphasize hands-on learning, but blending them with a sophisticated virtual experience, using the lessons learned from this year’s offerings.”