Hairdressers were warned more than a year ago. “Avoid falling in to the temptation of chatter which is easily associated with your field of work,” the pope told a group of devout professionals who were probably expecting a straightforward blessing.

Although he had previously been just as firm with the Vatican police: “If one hears someone gossiping, stop him! Tell him, ‘Here, there can be none of that!’”

Now, in a declaration that should placate any still indignant hairdressers, especially those familiar with Frédéric Martel’s book, In the Closet of the Vatican, his holiness has publicly extended his warning. “Please, brothers and sisters, let’s try to not gossip,” he said last week. “Gossip is a plague worse than Covid. Worse.”

If this came over as faintly tactless given the relative mortality rates, maybe the Vatican’s gossip trouble is also worse than anyone imagined, even after Martel revealed how easy it was to persuade residents to help him expose the endemic sexual hypocrisy within the city. “It got very gossipy,” he told one reporter. “Even the sight of my microphone on the table during interviews wouldn’t stop people saying, ‘This one is sleeping with this one’.”

In fact, the papal intervention may well say more about Covid-19 infection control within the Vatican than it does about extramural gossip. Is its management still relaxed on social distancing, as reported in March? Because how else is the gossip circulating? Beyond the Vatican, the pope’s intervention is surely as redundant as an exhortation to celibacy would – theoretically – be inside it. He merely reminded some of us that the supply and practice of gossip, both dwindling with enforced atomisation, is approaching exhaustion, though with no obviously purifying results.

What the pope could not manage in years of warnings the pandemic has achieved in six months – a second spike could finish the job. If gossiping is, as he said, the work of the devil, “who always goes about saying the bad things of others”, the impact on chat of Boris Johnson’s “rule of six”, added to existing challenges to extra-family socialising, office life and attempts at courtship, could be the closest thing to an answering miracle this century.

Naturally, gossip’s unwilling subjects will welcome a time when their activities no longer provide material for friends and acquaintances, then for the more talkative friends’ families and acquaintances, taking the news forward for ever further commentary. These days, a person really could choose to “discreetly admonish” an errant acquaintance instead of talking about them, as the pope suggests, and feel confident that this intervention would never, in the absence of meetings, parties or canteens, get out. 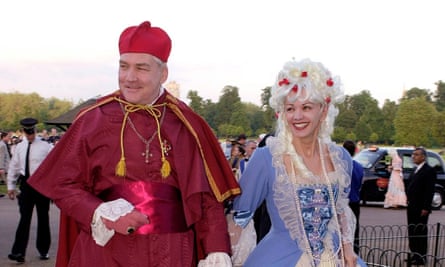 The national news offers occasional, gossip-like consolations – think of Johnson’s holiday from hell – but promotional disclosures, however pitiful, are a poor substitute for the real thing. Similarly, the notion that Martin Amis’s father may not have been Kingsley Amis might even have been worth repetition had it originated somewhere other than his autobiographical novel. And though it’s generous of Barbara Amiel to confirm in extracts from her new memoir that she fellated the late publisher George Weidenfeld only for the purposes of social advancement, prior to migrating to Jeffrey Epstein’s neighbourhood with the future felon, Lord Black of Crossharbour, her disclosures are so gross, the lead characters so freakishly repellent, and their pomp (outside Radio 4’s loyal Today programme) so historical that they hardly fulfil the same conversational needs as current, amateur, privately delivered information.

It adds interest, anyway, if at least one character belongs to the same species, if not the same postcode. Parliamentary gossip, for the same reason, rarely seems worth passing on after reading. “For what do we live, but to make sport for our neighbours, and laugh at them in our turn?” Some level of connection or familiarity is, as Elizabeth’s father suggests in Pride and Prejudice, essential to full gossip engagement, comedy and reward. Although not unlike the pope with his narrow view of gossip as always malicious, the cynical Mr Bennet still does gossip – for which there really ought to be a less pejorative word – a disservice.

It’s probably different in the Vatican, but in the non-celibate world gossiping is regularly any of concerned, celebratory, illuminating, cautionary, incredulous, moral, magnanimous and life-enhancing. Its pandemic-inflicted attenuation has been commensurately dulling. So much so that its absence must, if gossip psychologists are to be believed, be harmful to the groups and individuals it normally sustains, whether by establishing shared bonds and values or, almost in the way of fiction and storytelling, multiplying viewpoints and expanding horizons.

As for virtue, a deliberate shutting down of these unofficial reports, as urged by the pope, promises to have all the beneficial effect of a super-injunction, both inside and outside the Vatican. His recommended approach, for instance, for the people who spotted the infected Cummings family ignoring lockdown laws, would have been to attempt fraternal correction: “Warn him between you and him alone.” Likewise, if biblically compliant neighbours had, having overheard the Carrie/Boris domestic, been content with fraternal correction, the Guardian might never have reported her analysis, guiding us ever since, to the effect that he cares for nothing, “because you’re spoilt”.

Ideally, six or fewer friends with little to report could nonetheless enjoy opportunities for structured debate on subjects such as “whither transport after Covid”, of the kind one enjoys on Radio 4 before looking elsewhere for music or practically anything. But it shouldn’t be necessary to quote Pepys’s diary, Jane Austen’s letters or Virginia Woolf’s plans for “a debauch of gossip”, to recognise that shared consideration of human silliness or drama is so far from being the monopoly of the wicked or otherwise deficient, that deprival during the pandemic is up there with that of holidays, gatherings, live entertainment and – since it’s already being mourned – that great gossip generator, Christmas.