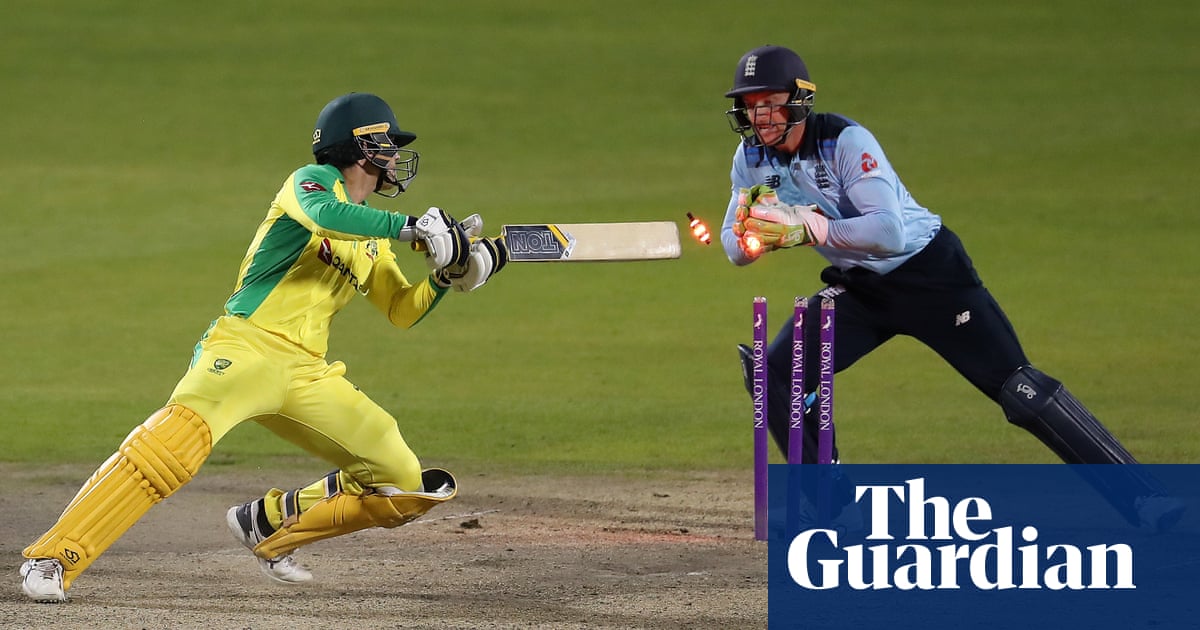 Eoin Morgan had his bowlers to thank after a stunning heist at Old Trafford that saw Australia blow their chance to seal the ODI series with a game to spare and instead set up a decider on Wednesday.

Set 232 to win after suffocating England on a reused pitch, Australia looked to be motoring home when Aaron Finch (73) and Marnus Labuschagne (48) reached 144 for two in the 31st over with some gum-chewing dominance along the way.

But Morgan, a captain who enjoys a punt on the horses in his spare time, turned back to his two thoroughbreds in Chris Woakes and Jofra Archer and was rewarded with a game-breaking burst of four wickets in only 21 balls.

Woakes was immaculate, trapping Labuschagne lbw and bowling both Finch and Glenn Maxwell, while Archer continued the fire and brimstone from his initial two-wicket opening burst by persuading Mitchell Marsh to chop on. Had supporters been present, a good number would have been dashing back from the tram station.

This jaw-dropping burst saw both men bowled out – Woakes finishing with three for 32 from his 10 overs, Archer three for 34 – and left Australia needing 85 from 95 balls, with Alex Carey the last recognised batsman out in the middle.

The wicketkeeper could only look on as Sam Curran, selected ahead of Moeen Ali, dismissed over Pat Cummins and Mitchell Starc in successive deliveries and then fooled Adam Zampa with a slower ball.

With the under-qualified Josh Hazlewood for company, and the rate rising, Carey had little choice but to go for broke and in the penultimate over was finally stumped off Adil Rashid to complete a famous night for the world champions.

That England even had a sniff at the halfway stage owed plenty to a 76-run ninth-wicket stand between Rashid (35no) and Tom Curran (37), the pair finding unusual gaps in the field – the former even pulling Cummins for six – as 53 precious runs flowed from the final four overs to post 231 for nine.

Joe Root is usually a decent gauge of how a pitch is playing and here he struggled to rotate the strike; indeed after Jonny Bairstow edged Starc behind for a duck, Root’s desperation for a rare single saw Jason Roy run out by a sparkling throw from Marcus Stoinis at cover to see England 29 for two in the seventh over.

For the second match running Australia crackled with the ball and prowled in the field and so while Root and Morgan were able to steady the ship in a stand of 61 from 15 overs, it was hard going in the main and the pressure scarcely eased.

It eventually told when Adam Zampa sparked the loss of six for 59 runs by teasing an edge to slip off Root on 39. The leg-spinner outbowled his opposite number, Rashid, with figures of three for 36, trapping Morgan lbw for 42 – a successful review met by a roar from the tourists – and bowling Sam Billings for eight.

In between Zampa’s first two strikes came the loss of Jos Buttler, lbw to one that nipped back from Cummins, while Sam Curran edged Starc behind for one. At the other end Woakes had played a typically tidy hand but when Josh Hazlewood found his edge on 26, England sat at a grim 149 for eight in the 41st over.

The late rally stuck something resembling a total on the board and early hopes of a fightback were raised when Archer scorched through David Warner and Stoinis to continue a personal white-ball summer that sits in contrast to that with the red.

Neither batsman could handle his pace – Warner edging behind, Stoinis getting in an awful tangle against a fizzing short ball that plopped a simple catch for Buttler – but with his overs limited and Mark Wood absent through ankle soreness, Finch and Labuschagne knew relief was imminent and waited to attack others.

Rashid took punishment from Finch in particular, his first three overs taken for 27, and every blow reminding Morgan he could have run him out off the third ball of the innings, only to begin a feature of England’s fielding by missing the stumps.

All the chase required was for Finch and Labuschagne to keep their heads and play the percentages. A stand of 107 in 23 overs met the brief. But when Morgan pushed all his chips into the middle by turning back to Archer and Woakes, suddenly the zing bails were lighting up like it was Christmas in Manchester.