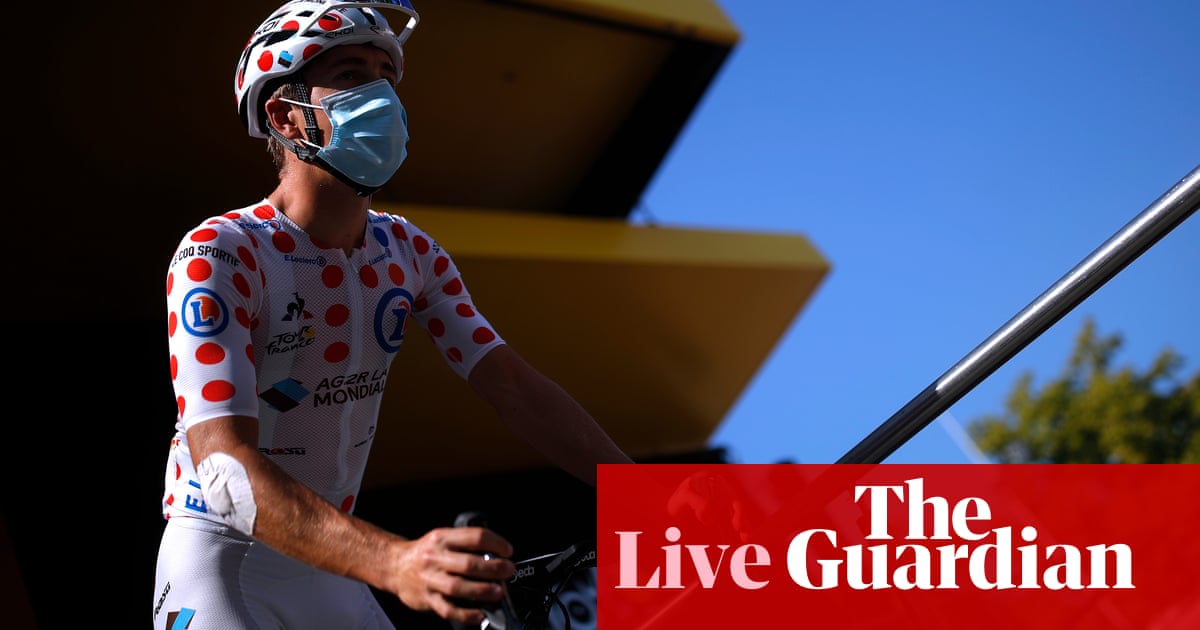 155km to go: Sagan and Bennett locked together at the front. Sagan tries to break away and they are at the front. Bennett looking cool and Sagan somewhat harried. They eventually sink back into the field as others try to go off at the front. Higuita is back in the peloton. Ben Hermans is the latest to try his luck in a breakaway.

Justin Horton has been in touch: “I notice that Lyon’s airport is named after Antoine Saint-Exupery, who is most famous for writing a story about a plane crash. I wonder if any other airport in the world is similarly honoured.”

160km to go: This has not been made easy for anyone looking to sit off the back and idle before the mountains arrive. Mitchelton-Scott try and force a break to help propel Adam Yates for a possible stage win. Jumbo-Visma don’t like that and close it down. And there’s a nasty fall. Oh no. Bob Jungels comes across and Sergio Higuita is down. He looks hurt and is remounting after a spell of licking his wounds on the floor. No apology from Jungels. Poor form. Higuita cycles alongside the medics’ ambulance and faces a long day ahead when he had been flying at the front.

165km to go: Jerome Cousin and Pierre Rolland take up the cudgels and start a breakaway. And are joined by Matteo Trentin as a 12-man group forms that includes Peter Sagan and Sam Bennett, with points on the board for the intermediate sprint. The contenders for the green jersey are at close quarters. Also in the group is Benoît Cosnefroy, the king of the mountains classification leader, but they can’t stay away.

Julian Alaphilippe takes it up and leads the field. He is looking for decent company for the breakaway. He clearly fancies staying out front for the day but is struggling to form a group. It isn’t really happening.

The peloton goes past Olympique Lyonnais’ stadium which I can tell you is nowhere near Lyon. It’s home to the current and multiple Women’s Champions League winners, and also the men’s team that forced Pep Guardiola into a brainfart last month in Lisbon. And they are off. François Lemarchand, still standing in for Christian Prudhomme waves them off.

The départ réel is 8km away as the riders takes in a tour of Lyon, the gastronomic capital of, well, the world. It’s a very lovely city.

It looks likely to be a Slovenian September at this rearranged Tour. If Primoz Roglic is the strongest man around then Tadej Pogacar has announced himself as the face of the future. Had he not been caught out by echelons on the first Friday then he might be challenging his compatriot even harder for the yellow jersey. And that’s bad news for Egan Bernal, who cracked somewhat on the second Friday. All three made it through Saturday’s chase into Lyon but here is a classic Sunday stage.

A 17-kilometre hors-catégorie summit finish on the Grand Colombier will further splinter the field. The stage also features a descent at Col de la Biche, which you may remember from 2017 was the scene of a spectacular crash involving Geraint Thomas.
William Fotheringham described it thus in his pre-Tour guide.

A super-category uphill finish on a super-steep climb in the southern Jura; this is where GC riders such as Egan Bernal or Primoz Roglic will have to show what they have left. The concentrated climbing in the final 80km will make it difficult for a break to succeed so an overall contender such as Bernal might win here.