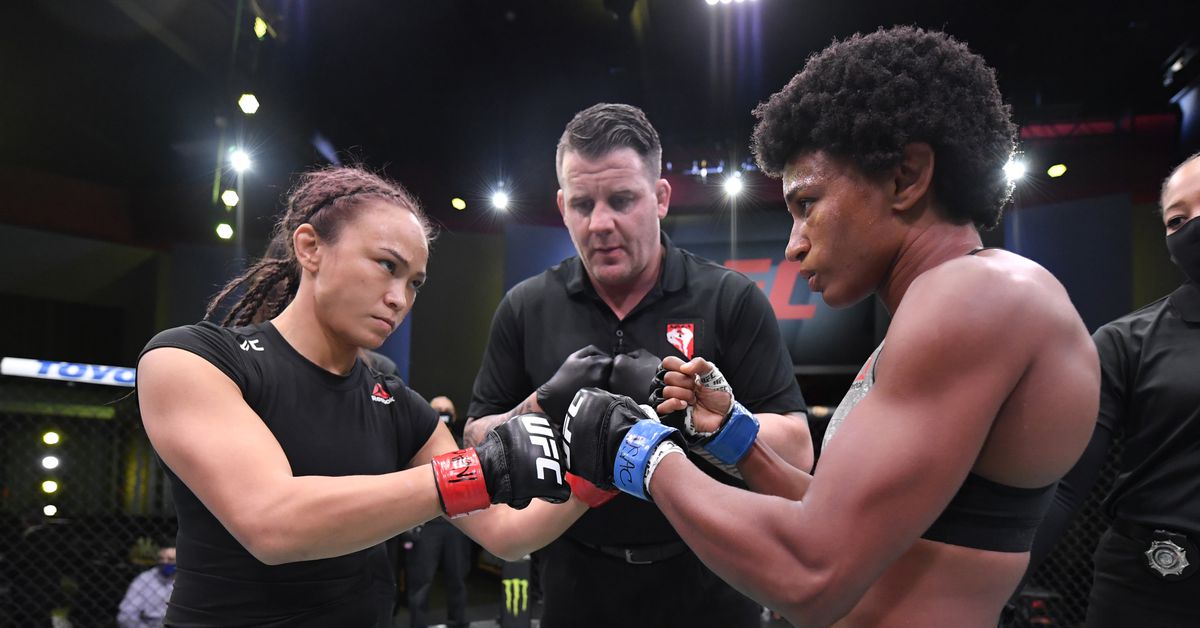 Michelle Waterson and Angela Hill heard the all the talk. How could they not?

From the moment it was announced that Glover Teixeira vs. Thiago Santos would not be happening on Sept. 12 as planned due to Teixeira testing positive for COVID-19, you could almost feel the vibration from the internet’s collective shrug when it was later made official that Waterson and Hill would instead headline UFC Vegas 10 on Saturday.

Somewhere along the way that shrug turned to genuine hostility as a segment of fans questioned why the two strawweight veterans were being granted this opportunity given their recent circumstances. Both were coming off of decision losses (two straight in Waterson’s case), both had the stigma of fighters who go to the judges more often than not (despite solid resumes, they had one UFC Fight of the Night award between them prior to last night’s effort), and neither brought narrative hooks into the fight that appealed to the average “Just Bleed” fan.

Waterson has long been seeking to become the UFC’s resident “Mom Champ,” (come on, she’s a cool mom!), which isn’t exactly the stuff that draws in the Conor McGregor crowd. On the other side, Hill became the first American Black woman to headline a UFC event, a particularly notable achievement given the ongoing social unrest in the world.

Understandably, Hill’s history-making assignment became a talking point for the media and what resulted was a predictable backlash from the most depressing corners of the combat sports fanbase. Hill even admitted at the UFC Vegas 10 post-fight presser that she made it a point to curb her frequent social media activity so as not to be distracted by anonymous negativity.

Don’t believe her? Take a glance at the ratio of likes to dislikes on this interview with ESPN. If you’re feeling brave, venture into the comments to really get an understanding of the—pardon my French—crap that Hill has to deal with just for answering questions about important issues outside of her fight with Waterson.

Add in a sprinkling of the misogyny that is all too prevalent when it comes to female athletics and it’s fair to say that more than a few people chose to approach the UFC Vegas 10 headliner with disinterest, or worse, active disdain.

But for anyone who’s followed Waterson and Hill’s careers, who knows the competitive fire and pride these two always bring to the cage, who understands what was on the line for both of them even if some saw it as simply being a replacement main event; for anyone who even has a vague familiarity with their stories, they knew that the fight had potential for drama.

Waterson, a budding star during the rise of women’s MMA who has been literally punching above her weight since joining the UFC in 2015, and Hill, the quirky Ultimate Fighter cast member who is in her second run with the promotion and has been learning on the job since taking her first pro fight at the age of 29.

Different paths, for sure, and yet a fight between the two company favorites was inevitable, if not anticipated.

For 25 minutes on Saturday, none of those storylines mattered. The good and the bad. The love and the hate. The righteous support and the heinous barbs. All of that went out the window as Waterson and Hill did what they do best: fight like hell.

It will be remembered as one of the year’s best fights, not just for its closeness, but for the swings in the action, the adjustments, the sheer toughness on display as a battered and bloody Waterson continued to take the fight to a markedly improved Hill. Dana White praised both women after and the two earned a well-deserved Fight of the Night bonus.

In a time when we are so quick to turn our attention to—and subsequently abandon at the first sign of adversity—the next big thing, names like Sean O’Malley, Maycee Barber, Herbert Burns, or Mariya Agapova, it has to be considered refreshing when established properties deliver as advertised. The next crop of UFC stars is a promising one and their day in the sun will come, but last night it was all about the veterans showing how to conduct themselves inside and outside of the octagon.

Waterson’s glow seemed to cause the swelling on her face to fade in real time as she joked at the post-fight presser that the jiu-jitsu brown belt promotion she received immediately after the fight meant she could no longer sandbag and pick on lesser grapplers back at the gym. A gag for the hardcore martial arts crowd, if there ever was one.

And Hill stole the show in her own right, staying cool and composed as she spoke to the media afterwards, only cracking when a reporter told her how much Hill inspired her daughter.

Hill opened her media session by saying, “I wish I could get one more round.” After seeing how her and Waterson responded under the brightest lights, it’s fair to say there are a lot of fans who feel the same way.