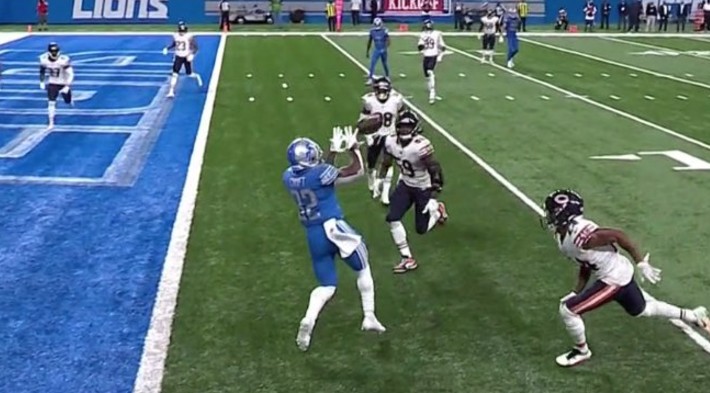 The Detroit Lions were in firm control entering the fourth quarter with a 23-6 lead against the Chicago Bears, who looked hapless on offense behind Mitchell Trubisky.

However, in the fourth quarter Trubisky came alive, firing some absolute darts, as he tossed three touchdown passes in the final frame to lead the Bears to a 27-23 win. The last of those was an absolute dime to Anthony Miller at the pylon for the go-ahead touchdown with just under two minutes to play.

That did leave plenty of time for Matthew Stafford to orchestrate a game-winning drive of his own, and he nearly pulled it off as the Lions marched down the field to get inside the red zone, with a chance at a win. After spiking the ball with 11 seconds on the clock, the Lions dialed up a spectacular playcall to get rookie running back D’Andre Swift open on an option route to the goal line. The problem was the young back turned too soon and dropped the ball as he turned into the end zone.

The final play saw Stafford heave it into the end zone but get knocked harmlessly to the turf with the Bears in full prevent mode, as Detroit fell to 0-1 in horrific fashion. It’s brutal for the team having blown a 17-point lead in the fourth quarter, but especially for Swift who had three carries for eight yards and a touchdown and three catches for 15 yards prior to the drop. Swift wasn’t heavily featured, as Adrian Peterson had most of the carries, but he had a chance to play the hero and instead will spend the next week-plus reliving that drop in his head.