In the direct aftermath of George Floyd’s killing, the playwright Roy Williams conceived a collection of audio plays as an act of “creative activism”. They were quick-response dramas that spoke to the moment and bridged the gulf between art and political protest.

Those plays are refashioned as a live outdoor performance, some set to music and all performed at a social distance in a basketball court in North Woolwich as part of the Greenwich + Docklands international festival. A co-production between Stratford East and the Royal Docks Team, 846 Live picks four plays out of the original 14 and each segues into the next under the clever direction of Matthew Xia.

Their messages resonate differently now compared to that moment in July when the Black Lives Matter movement was at its global height, and they serve as an important reminder. They speak of police brutality and systemic violence but they also, obliquely, raise questions on how to keep the “creative activism” alive and current.

It is gratifying to watch the plays take on physical life – the backdrop resembles a placard protest mounted at Parliament Square and the actors are scattered around the court, some sitting on brick-like speakers, others performing on them as if on a dais at a protest rally.

IC3, by Nathaniel Martello-White, features an unnamed black man, played by Ira Mandela Siobhan, being observed on a bench by a white American police officer (Kirsty Bushell). We only hear her in an aural recording, relating the man’s apparently “suspicious” movements in a radio call, her voice brimming with barely contained aggression. When her officer-in-charge does not sanction action, she becomes agitated: “He’s sitting there, breathing,” she insists, and the loaded word – resonating with Floyd’s dying statement “I can’t breathe” – lands hard.

The original audio drama is imbued with savage satire and menace; here, its darkness is tempered by movement as Mandela Siobhan mimes and dances to the police officer’s words, sometimes in the style of hip-hop, other times balletic. 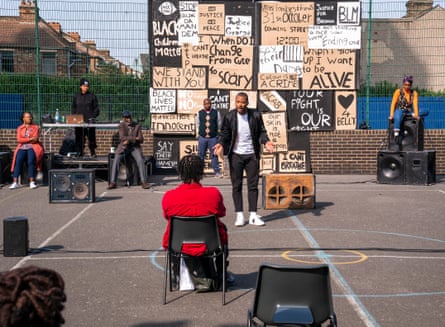 The play is followed by a more overtly aural piece, again performed by Mandela Siobhan, about a black British man in a mixed marriage, in Nathan Powell’s Suck. Your. Mum, then the most devastating part of the show, Sumerah Srivastav’s Say Their Names, in which a litany of dead black lives are recounted, all of whom ended at the hands of the police, in custody. Michael Elcock speaks with eloquent indignance from a megaphone, and the piece is set to DJ Xana’s stunning compilation of synthesised bass sounds and vocals – to electrifying effect.

The show ends with My Part by Selina Thompson, which delivers messages of injustice and the need for change. As a whole, it is a rousing, impactful production, with the most sensational music by Xana, but at just under 45 minutes and four pieces, it feels truncated in comparison to the collection of audio plays.

Meanwhile, the festival – an annual event in east London – has reconceived itself post-lockdown to bring live performance back to the community – much of it embedded within the fabric of the streets, parks and dockland areas, and free of charge.

Its highlights have included The Weaver of Woolwich, a video installation shown at General Gordon Square in Woolwich, written as a people’s history by Booker prizewinner, Bernardine Evaristo, who grew up in the area. A chorus of voices speak Evaristo’s narrative and it is accompanied by images from the collections of the Royal Borough of Greenwich. At just 10 minutes long, it is a celebration of diversity, past and present, and while it contains a narrative simplicity, it has an uplifting effect. 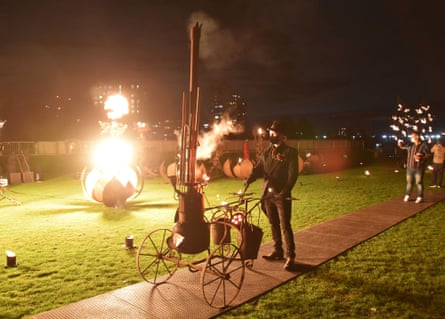 Fire Garden is a visual spectacle that marks the end of this year’s festival, not with the usual high-octane fireworks display but a socially distant fire installation, set within Thames Barrier Park, at the Royal Docks.

It is an enthralling sight, produced by Walk the Plank, with a corridor of flares set along a topiary garden, coloured floodlights, fairy lights intertwined in trees, and fire sculptures. Together, they give the effect of a park in flames, although of course it is not (the fire bridges is on standby to ensure safety). Alongside this visual feast are oral history recordings which can be listened to on benches. They overlap and combine to create a cacophony of first-person accounts, complete with the sounds of dockland gulls. It might not be fireworks but it is a sight, and sound, to behold.

• The Greenwich + Docklands international festival took place 28 August-12 September. The Weaver of Woolwich can be viewed on YouTube free.