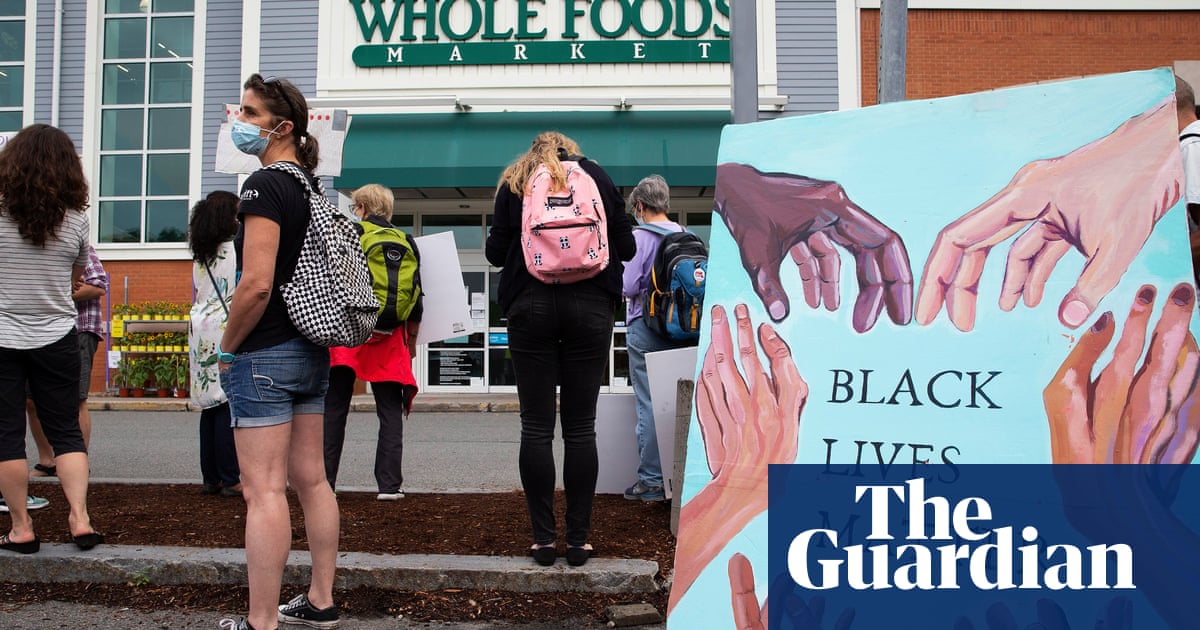 Whole Foods is advising managers to “talk about donations” the supermarket chain and its parent Amazon have given to various social justice groups while enforcing dress code policies that ban Black Lives Matter slogans on uniforms or face masks, according to internal documents obtained by the Guardian.

Managers are advised to seek to understand how the team member is feeling then ask the worker if they are “aware what WFM and Amazon have done in support of social justice”.

It continues to affirm Whole Foods’ dress code policy banning political messaging of any kind, which falls more heavily on BLM supporters in the current environment, according to staff, and comes despite Whole Foods and Amazon’s publicized statements and campaigns in support of Black Lives Matter.

“It is very clear that Whole Foods is doing this to stamp out support for Black Lives Matter. There have been demonstrations at Whole Foods across the country in support of the Black Lives Matter movement and the company has been quick to take corrective action against those involved,” said the worker who provided the documents, but requested to remain anonymous for fear of retaliation. The documents claim attorney-client privilege in asking managers not to post, print or distribute them outside of leadership.

Amazon has been criticized by activists for claiming to support BLM while supporting business practices that they claim perpetuate the status quo, working with Immigration and Customs Enforcement and selling controversial facial recognition software to police forces. Amazon implemented a one-year moratorium on police use of its artificial intelligence software, Rekognition, in June following protests.

In June 2020, Whole Foods circulated a “dress code reminder” to team member leadership and obtained by the Guardian, which affirmed only name tags and approved Whole Foods and promotional buttons are permitted for team members to wear, but noted there are exceptions for union-related buttons. “Should you become aware of a TM wearing a button with a union related message, please partner with legal before addressing the TM.”

In December 2019, Trump’s National Labor Relations Board reversed a 75-year precedent in ruling private sector employers are permitted to ban some union insignia.

The internal documents were circulated to management as Whole Foods faced several protests among its workers around the US over the dress code policy preventing workers from wearing Black Lives Matter slogans on their masks in support of the George Floyd protests around the US that began in late May 2020. Whole Foods workers held Black Lives Matter protests in Massachusetts, New Hampshire, California, Oregon and Washington.

One of the most significant protests at Whole Foods was at a store in Cambridge, Massachusetts. The store’s workers organized daily protests from the end of June and July 2020, and were sent home repeatedly by management over workers wearing Black Lives Matter slogans on their face masks.

A class action lawsuit was filed in July 2020 on behalf of workers in Cambridge, Massachusetts, and other US cities who allege the company dress code policy was selectively enforced to bar workers from wearing Black Lives Matter slogans on their face masks, and claim workers were disciplined for doing so, including Savannah Kinzer, whose employment was terminated. The lawsuit has grown to represent 28 workers from nine states. Whole Foods is seeking to dismiss the lawsuit and claimed Kinzer was terminated for violating time and attendance policy.

A Whole Foods spokesperson told the Guardian in an email: “It is common practice to provide guidance for our leaders to facilitate conversations on a number of policy-related and timely topics. This ensures that our Team Members across our more than 520 stores and facilities receive consistent, accurate information that follows all common employment requirements and protects their legal rights.”