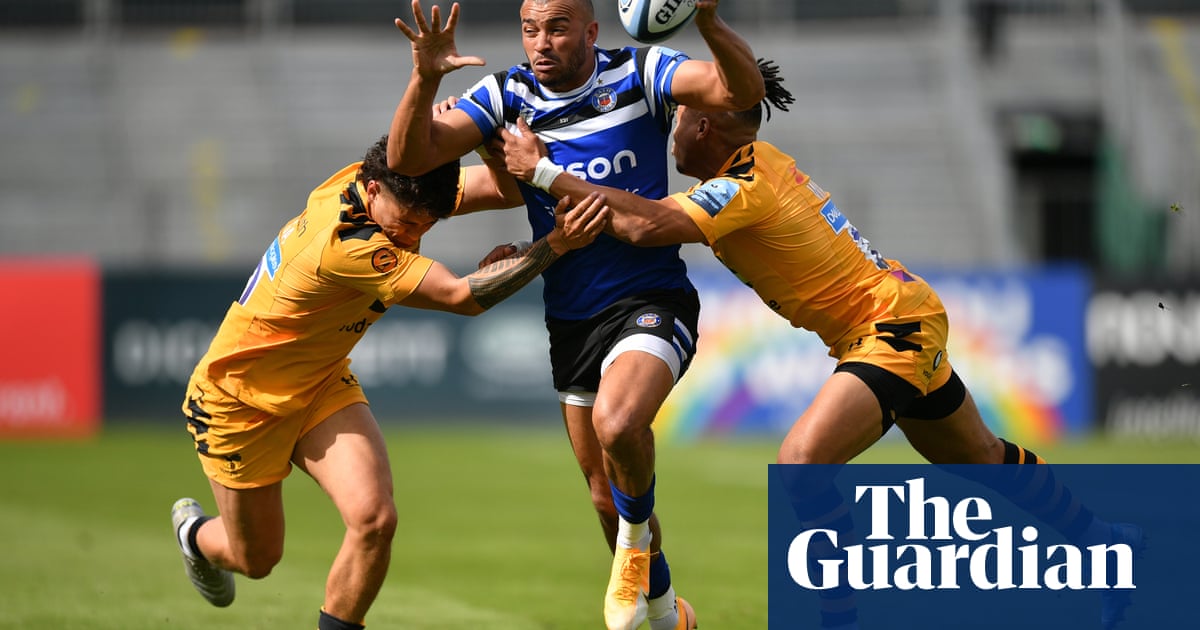 As bonkers Bank Holiday games go this eventful contest was right up there. Injury-marred and error-strewn at times it was ultimately a triumph of never-say-die spirit over the supposed odds as Wasps, despite a savage casualty list, secured a victory which propels them above the home side and into the top four.

To say Wasps did it the hard way would be a wince-inducing understatement. They shipped so many injuries in the first half alone that uncontested scrums were required from the 34th minute. With both specialist hookers sidelined, the scrum-half Dan Robson and the prop Simon McIntyre were forced to start throwing in to the lineouts and Bath, 13-0 up early on, must have felt they were in business.

They reckoned without some remarkable individual contributions from, among others, Jack and Tom Willis, Joe Launchbury and Robson, and a collective defensive commitment which gave Bath a spoonful of their own uncompromising medicine. One last-quarter hit from the outstanding Launchbury lifted the youthful Tom de Glanville clean off his feet and a 75th-minute penalty try, following an expertly driven lineout, put the tin lid on a memorable smash-grab raid.

Bath had some outstanding performers of their own – with Sam Underhill and their captain, Charlie Ewels, both prominent – but paid the price for not quashing a battered Wasps side earlier. They were also slower to react to the game’s changed tactical shape, with the visitors opting for quick taps and long throws over the top which completely threw Bath’s set-piece orientated approach.

“Joe Launchbury said it was probably one of the best wins he’s ever had in a Wasps jersey,” said Lee Blackett, Wasps’ director of rugby. “The character we had to show and the adversity we had to go through … I’m really proud.”

Amid the thrills and spills, though, the attrition rate was worrying even by modern rugby’s uncomfortable standards. There was always a risk of a few twanged muscles and banged-up bodies in the early weeks after the league’s resumption and those fears were duly realised. Wasps, already without their injured former England tighthead Kieran Brookes, could only wince as Thomas Young (head), Lima Sopoaga (hamstring) and Tommy Taylor (ankle) all trooped off before Gabriel Oghre got his head on the wrong side trying to tackle Josh Matavesi and also departed.

It left Wasps in an understandable tangle. The prop Tom West, starting only his second Premiership game, bravely volunteered initially to go to hooker before changing his mind, leaving no realistic option to uncontested scrums. If the home pack were unprepared for that turn of events they were equally nonplussed by the quick-thinking Robson, who pirouetted like a Strictly Come Dancing contestant and fed the equally alert Jacob Umaga who slipped over beside the posts for his sixth try of the season.

The 13-13 half-time score was remarkable enough in isolation given that Wasps’ supposed emergency lineout thrower, Young, was also unavailable. McIntyre was nominated on the basis that, in Blackett’s words, he was “the best of a bad bunch” and the tactical replacement of the vast Biyi Alo at the interval was another shrewd
move. Had Marcus Watson clung on to an slightly high offload from Umaga it might also have simplified Wasps’ life as they sought to battle back from an early gift of a try for Ruaridh McConnochie, courtesy of a hopeful long pass from Sopoaga and a fumble from Malakai Fekitoa.

It neatly summed up the fluctuating contest when, in the 57th minute, Bath’s Taulupe Faletau was narrowly denied on the visitors’ line, only for Wasps to go back up the other end and, following a clever quick tap from Robson and strong runs from Jack Willis and Brad Shields, put West over for a crucial score.

Apart from a close-range score from Jack Walker, the rest did little to assist Bath’s play-off hopes, with the piped cheering intermittently broadcast over the PA system failing to rouse them. “Today was an opportunity but it’s not terminal,” said Bath’s director of rugby, Stuart Hooper. “It’s definitely going to be tight right to the end.” The occasion was also notable for Sara Cox running the line, making her the first female assistant referee to officiate at a Premiership league game.