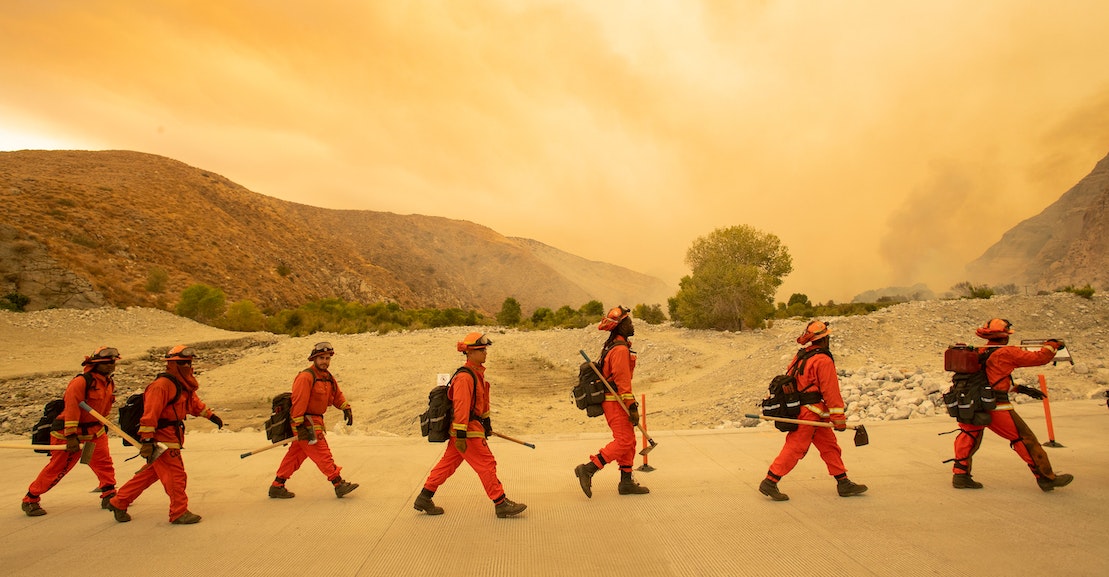 The lightning storm started in the early hours of August 15, electricity snaking the sky, looking for a place to land. California’s fire season is traditionally a six-month affair lasting from May to October and peaking in early fall. But as climate change progresses, the fires have grown more frequent and fire season has expanded. By this time last year, fires burned through 59,000 acres, compared with the 7,000 fires so far this year that have claimed nearly 1.5 million acres.

Even as the escalating severity of each year’s fires has come to feel expected, an obscene kind of normal in the Anthropocene, the pandemic has brought new dangers: Home evacuations and shelter relocations are now riskier; relief funds and service organizations are stretched as mass unemployment has dropped the floor out from families across the state. There is also the matter of the labor force California has long relied on to tend to a landscape set ablaze: incarcerated firefighters.

In May, when prisons in California reported the first  Covid-19 infections, the state responded to the crisis by releasing people with preexisting medical conditions and little time left to serve on their sentence. In doing so, the California Department of Corrections and Rehabilitation off-loaded some of its most exploitable workers. (This was precisely what California’s then–Attorney General Kamala Harris predicted when, in 2014, her office argued against a new parole program that expanded eligibility for early release. Incarcerated laborers were simply too essential to California’s economy to deserve freedom.)

As fires tear through the state—often in places where Indigenous peoples were banned from conducting controlled burns on land that was stolen by a nascent California government—the depravity of this sense of dependence has been more fully exposed. “This situation right now really shows the intersection of multiple challenges within the state,” Brandon Smith, who served as a firefighter when he was incarcerated, told me. “There’s an environmental challenge here, there’s a criminal justice challenge here, there’s the current Covid crisis, [and] the need to decarcerate these prisons.” We are dealing with co-created crises: California has made incarcerated people essential to its survival, while it’s the opposite narrative—their supposed unfitness for or debt to society—that justifies locking them in cages. The story of how we got here is the story of that contradiction.

Since 1915, California has conceived of its incarcerated residents as willing and able for and deserving of low-wage labor, which was exploited to build roads, construct public parks, and yes, fight fires. That effort grew when California expanded its prison system in the 1980s and ’90s, peaking in 2006 with 173,000 people locked away in state-run facilities located in low-income communities, where the land was less expensive.