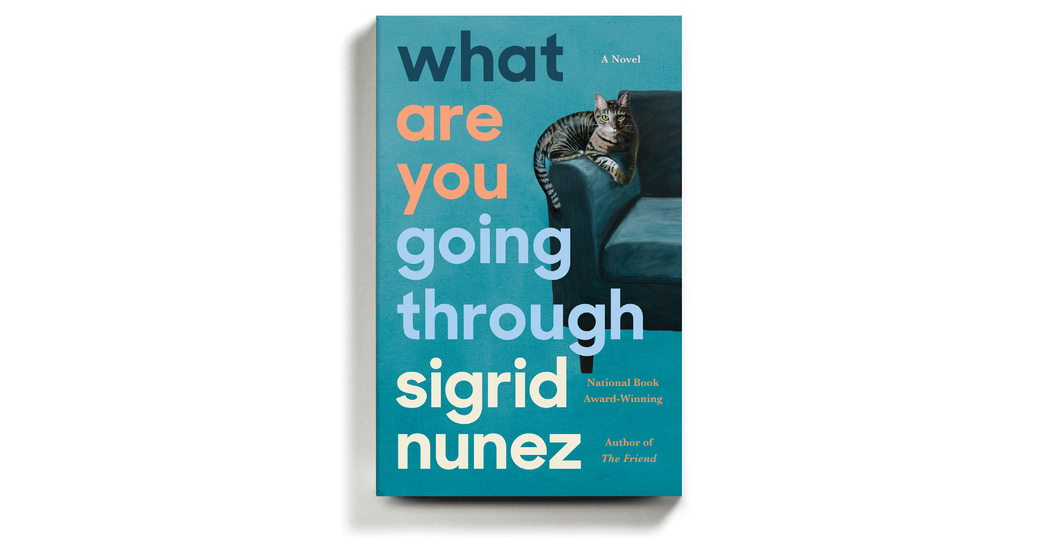 It takes something more than intelligence to be able to write intelligently. It requires something closer to echolocation, an acute sense, in mid-flight, of where you are.

Is this sort of intelligence, Michael Kinsley asked in his book about aging, merely an extra spritz of some chemical in the brain? Whatever it is, Sigrid Nunez has it. When I open one of her novels, I almost always know immediately: This is where I want to be.

“What Are You Going Through” is Nunez’s follow-up to “The Friend,” which won a National Book Award in 2018. That novel had a big dog on the front. This one has a small cat.

Animal fanciers: Keep it together. The cat in Nunez’s novel is appealing (it wryly narrates the experience of being thrown into a dumpster) but the role it plays is sub-Guildensternish.

“What Are You Going Through” is a short novel, set roughly in the present. It’s as good as “The Friend,” if not better. The primal question it asks is this: If a terminally ill friend asked you to be with them, in another room, while they took the pills that would end their life, would you say yes or no? Either answer has its moral hazards.

The terminally ill friend in this novel resembles Susan Sontag, whom Nunez knew and wrote about in a memoir titled “Sempre Susan.” This friend is an intimidating writer; she lives in New York City; before chemotherapy, she had important hair.

This unnamed friend is, as Sontag was, a critic of illness culture. About the notion that cancer is an opportunity for spiritual growth, she asks, “Who wants to die listening to that crap.”

Some days the friend worries her death will be painful; other days she fears it will merely be a bore. The contingency of existence is an amazement to her, and difficult to metabolize. She wants to find a nice house in which to end her life. She doesn’t want it to be in a red state.

This novel has sorrow in it. It’s also quite funny. We bumble our way toward death as we bumble toward everything. Is it gauche to stay around longer than you were supposed to? One observer refers to the two friends, out in the New England Airbnb they rent, as characters in a sitcom, “Lucy and Ethel Do Euthanasia.”

The narrator, also unnamed, is a writer in late middle age who is, in the modern manner, unable to get any work done. We don’t learn a lot about her. She is, like one of Rachel Cusk’s detached narrators, attuned to the stories of others, people she meets at her gym, at her apartment building and elsewhere.

Many of the stories she hears and weighs are about aging, particularly among women. One woman, who was once considered beautiful, says: “You don’t even know how privileged you are. Then one day it all disappears. Actually, it happens gradually. You begin to notice certain things. Heads no longer turn when you pass by, people you meet don’t always later remember your face. And this becomes your new life, your strange new life: an ordinary, undesirable person with a common, forgettable face.”

She deplores the catcalls in the street, and misses them when they are gone. The past is another country; Nunez dilates on life after we’ve stopped being (if we ever were) tawny animals.

This novel also considers children. What if you have one you simply don’t like? We read about the Sontag-like character and her daughter: “Enough bones of contention between us, my friend joked, to make a whole skeleton.”

Like “The Friend,” this novel warily circles the #MeToo movement. Noting that Einstein did some racist stereotyping in his private writings, the Sontag-like character comments, “So I guess there goes the theory of relativity.”

Fox News slides into view. The narrator’s elderly neighbor says to her, “Was it really possible that Americans would elect to the highest office in the land, to the most powerful position on earth, a person so manifestly unfit, so brazenly immoral and corrupt, a person who lied with every breath and was a complete incompetent to boot?”

The person this woman has in mind is Hillary Clinton. Her son fears that Fox has planted a chip in her brain. The neighbor doesn’t take it well when the narrator remarks that Sean Hannity looks like Lou Costello.

Another character, the narrator’s ex-boyfriend, is a stern and patronizing intellectual who tours the country lecturing on humanitarian topics and on global warming, about which he says it’s too late to do anything. We’ve dithered our chances away. Is there in him a touch of Sontag’s son, the nonfiction writer and policy analyst David Rieff, whom Nunez once dated? She implies; we infer.

Being near death, in this novel, comes to seem like sitting in front of a blazing bonfire while in the Arctic: your face is aglow, thanks to your friends, but you can no longer feel your back.

“The real reason I had agreed to help my friend was that I knew that, in her place, I would have hoped to be able to do exactly what she now wanted to do,” the narrator says. She adds: “I would not be able to escape the feeling that this was all a kind of rehearsal, that my friend was showing me the way.”

Not everything clicks in “What Are You Going Through.” The novel drifts at a few moments. There are digressions into the plot of a mystery novel the narrator is reading that, like the vacuum cleaner in “Yellow Submarine,” self-suck and disappear.

But you can say about this wise novel what the narrator says about “Make Way for Tomorrow,” the Depression-era movie she watches with her dying friend: “No matter how sad, a beautifully told story lifts you up.”