These indicators are mostly for travel and entertainment – some of the sectors that will recover very slowly. 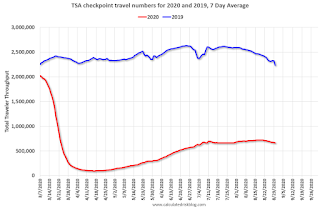 This data shows the seven day average of daily total traveler throughput from the TSA for 2019 (Blue) and 2020 (Red).

This data is as of August 30th.

The seven day average is down 70% from last year.  There had been a slow steady increase from the bottom, but air travel has mostly moved sideways recently.

The second graph shows the 7 day average of the year-over-year change in diners as tabulated by OpenTable for the US and several selected cities. 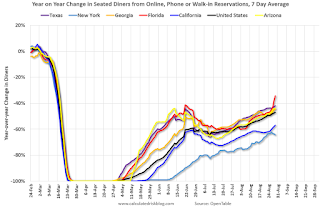 Thanks to OpenTable for providing this restaurant data:

This data is “a sample of restaurants on the OpenTable network across all channels: online reservations, phone reservations, and walk-ins. For year-over-year comparisons by day, we compare to the same day of the week from the same week in the previous year.”

Note that this data is for “only the restaurants that have chosen to reopen in a given market”. Since some restaurants have not reopened, the actual year-over-year decline is worse than shown. 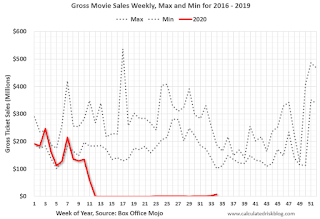 This data shows domestic box office for each week (red) and the maximum and minimum for the previous four years.  Data is from BoxOfficeMojo through August 27th.

Note that the data is usually noisy week-to-week and depends on when blockbusters are released.

Movie ticket sales have picked up over the last few weeks, and were over $7 million last week (compared to usually around $300 million per week).

Most movie theaters are still closed, but a few seem to be reopening (probably with limited seating at first). 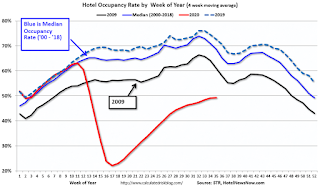 This graph shows the seasonal pattern for the hotel occupancy rate using the four week average.

The red line is for 2020, dash light blue is 2019, blue is the median, and black is for 2009 (the worst year probably since the Great Depression for hotels).

This data is through August 22nd.

COVID-19 crushed hotel occupancy, however the occupancy rate has increased in 17 of the last 19 weeks, and is currently down 30.3% year-over-year.

The leisure travel season usually peaks at the beginning of August, and then the occupancy rate typically declines sharply in the Fall.

With so many schools closed, the leisure travel season might have lasted longer than usual this year, but it is unlikely business travel will pickup significantly in the Fall. 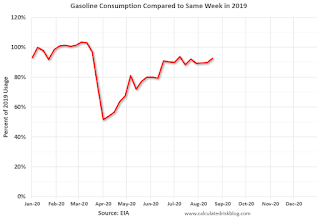 This graph, based on weekly data from the U.S. Energy Information Administration (EIA), shows gasoline consumption compared to the same week last year of .

At one point, gasoline consumption was off almost 50% YoY.

As of August 21st, gasoline consumption was only off about 8% YoY (about 92% of normal).

Note: I know several people that have driven to vacation spots – or to visit family – and they usually would have flown.   So this might be boosting gasoline consumption over the summer.

This graph is from Apple mobility. From Apple: “This data is generated by counting the number of requests made to Apple Maps for directions in select countries/regions, sub-regions, and cities.” This is just a general guide – people that regularly commute probably don’t ask for directions.

There is also some great data on mobility from the Dallas Fed Mobility and Engagement Index. However the index is set “relative to its weekday-specific average over January–February”, and is not seasonally adjusted, so we can’t tell if an increase in mobility is due to recovery or just the normal increase in the Spring and Summer. 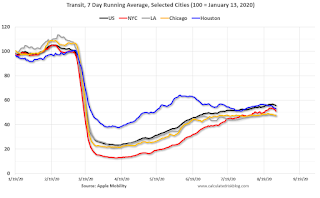 This data is through August 29th for the United States and several selected cities.

The graph is the running 7 day average to remove the impact of weekends.

IMPORTANT: All data is relative to January 13, 2020. This data is NOT Seasonally Adjusted. People walk and drive more when the weather is nice, so I’m just using the transit data.

According to the Apple data directions requests, public transit in the 7 day average for the US is still only about 56% of the January level. It is at 48% in Los Angeles, and 53% in Houston. 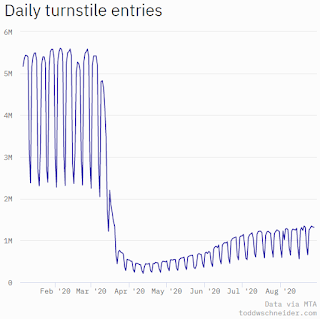 This graph is from Todd W Schneider.

This data is through Friday, August 28th.

Schneider has graphs for each borough, and links to all the data sources.