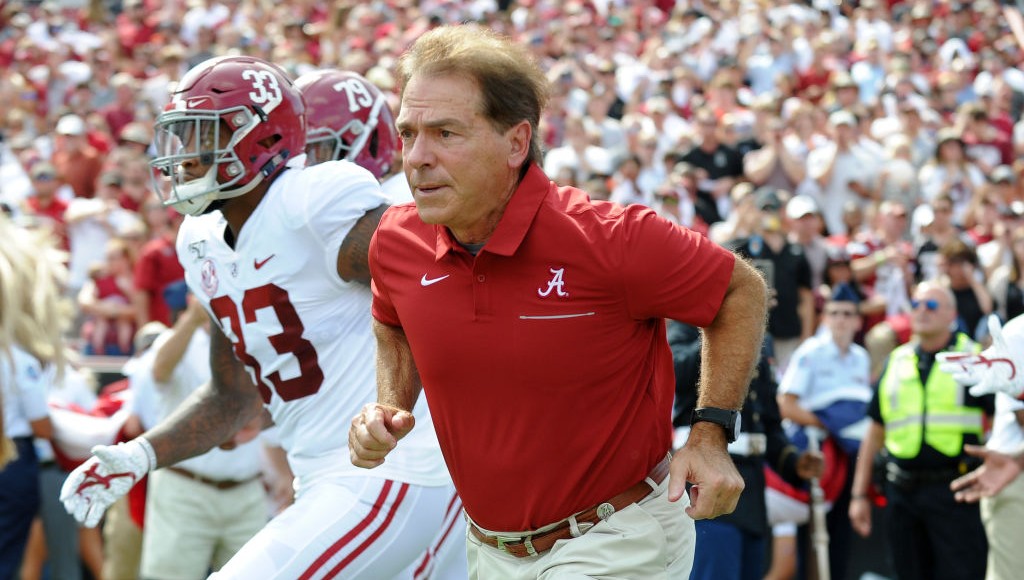 Alabama football players planned a march with other athletes for Monday from the football facility across campus to the Foster Auditorium in protest of social injustices and systemic racism amid a moment in which the sports world continues to speak out on the issues facing the Black community, particularly following another police shooting in which Jacob Blake was shot seven times in the back in Wisconsin.

When the march began on Monday, head coach Nick Saban was at the front walking with his team, showing solidarity with his players at this moment in America.

After the march, Saban spoke about the obligation he and others have to impact social change with their platforms and how much he’s learned from his players, via AL.com.

“Sports has always created a platform for social change,” Saban said. “For each of us involved in sports, I think we have a responsibility and obligation to do that in a responsible way and use our platform in a positive way to try to create social change in positive ways.

“Through this process, I’ve learned a lot from our players. I don’t get to see the world through the same lens that a lot of our players do. I think I respect and appreciate the lens they see the world in and they live the world in. We had various speakers that I think contributed that education as well, whether it was Condoleezza Rice, Charles Barkley, Stephen A. Smith, Joey Galloway, Tony Dungy. All those people had an interesting way that we could all make positive change.

“So this is what helped me grow in my role as a leader: to listen to the players, to learn from the players and to give them the opportunity to do things that could impact social change today.”

Star running back Najee Harris likewise spoke, explaining that this isn’t something that can end with the players march, calling for change in various forms.

“This call for change cannot end here today,” Harris said. “We walk to this schoolhouse door intentionally because, while much has changed in the last 57 years, too many things have not. So in the present moment, we as student-athletes need to play our part in bringing out positive change. … We need change in our system of law enforcement, we need change in our communities and we need change in our hearts.”

That Saban took a leading role in the march is certainly not a minor story, given his prominence as a person of influence in the state of Alabama, well beyond just the football field. There is, of course, a skeptical view that Saban, always recruiting, can’t choose to stay on the periphery in this moment and taking a stand with his players is just good business. At the same time, it’s worth noting that this has not always been the case with football coaches and even if there’s certainly some recruiting points to be gained, his presence only helps to amplify the message and spark conversation with a greater audience.