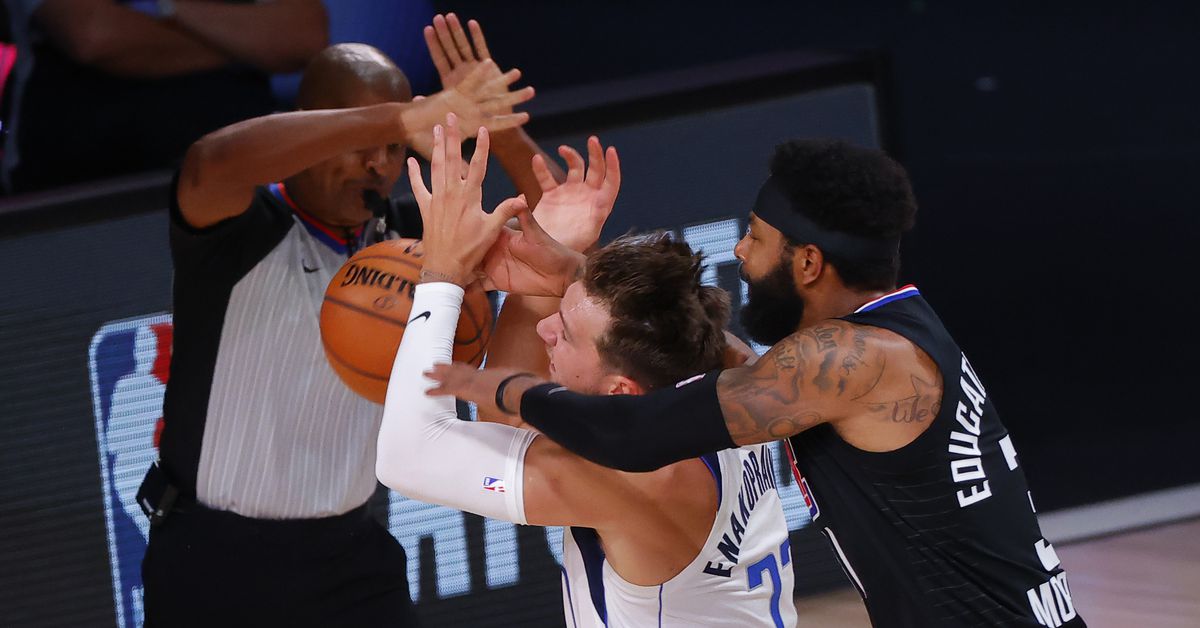 Marcus Morris is becoming one of the key figures in the 2020 NBA Playoffs for all the wrong reasons. The Los Angeles Clippers forward found himself in the middle of several controversial moments in his team’s first round matchup against the Dallas Mavericks, culminating in a first quarter ejection in Game 6 before LA closed out the series with a 111-97 victory.

As Luka Doncic drove to the basket on Sunday evening, Morris wrapped him up from behind and struck him twice in the head. Doncic would rise to his feet to confront Morris before teammates on both sides intervened.

Morris was given a flagrant-two and ejected. The Clippers were only up two points at the time of the foul, but would take control of the game in the second and third quarters with Morris out to advance to the second round of the playoffs.

Clippers coach Doc Rivers said he believed Morris was only given an ejection because of his reputation. That one doesn’t really pass the sniff test. Morris hit Doncic in the head twice, which is enough to warrant the flagrant. Just because that type of play was allowed in the ‘90s doesn’t mean it deserves to be allowed today.

Rivers is right about one thing: Morris certainly has a reputation. The ejection for hitting Doncic was at least the third controversy that Morris was involved in during the series. As it happened, fans continue to allege that Morris is a dirty player.

The fact that Morris tweeted about he had never tried to injure anyone just a few days earlier wasn’t lost on fans critical of his style of play.

I play this game with a level of respect for myself and other players. To think I would try to injure somebody is crazy to me. 10 years going against the best. I stand on morals and hard work. I compete and leave it out there every game.

Basketball has never been that serious to try to hurt somebody. Im not apologizing for shit because I know what I put into this game day in and day out. It was a mistake deal wit it. Competing is why I play.

Morris was causing mayhem against the Mavericks from the very start of the series. In Game 1, Morris wrapped up Doncic hard and gave him an extra shove at the end of the foul. As Kristaps Porzingis rushed to confront Morris after the play, Morris shoved him before the two were separated by teammates.

Morris and Porzingis were each called for a double technical foul. It was Porzingis’ second technical of the night, which meant he was ejected from the game. Dallas held a small lead before Porzingis was tossed and would ultimately lose the game.

Morris and Doncic were involved in another incident when a Clippers victory was well in-hand during Game 5. After Doncic turned in a brilliant 43-point triple-double and hit an immaculate buzzer-beater to win Game 4, Morris appeared to rush at Doncic and step on the ankle he had sprained in Game 3.

It’s too hard to know if this was intentional or not, but it doesn’t look good for Morris given that he had another incident to end the series.

The Clippers acquired Morris from the New York Knicks in a three-team trade in February, giving up their first round draft pick, Detroit’s 2021 second round pick, Maurice Harkless, and Jerome Robinson to complete the deal. While Harkless has a case as a more versatile defender, Morris gave the Clippers a superior shot-maker on the wing and another, um, physical presence.

Morris has had his ups-and-downs since arriving in Los Angeles, but there’s no denying he’s been able to secure a few impressive statistical accomplishments so far. Morris’ net rating of +15.8 is identical both in 19 regular season games with the Clippers and six games in the playoffs. Morris is also in five of the Clippers’ six most played lineups during the postseason, including the one with the most minutes and a sky-high 21.7 net rating.

In six games against the Mavericks, Morris finished with ridiculous 68.5 percent true shooting. Despite his hot hand in round one, there’s still an argument that Morris’ penchant to cause trouble on the court could ultimately be a detriment to Los Angeles. JaMychal Green also shot the ball well against Dallas and could be another lineup option for the Clippers, though he isn’t as good defensively as Morris. You wonder if the team will miss Harkless as an experienced wing defender at some point during this run.

Morris has a long history of being an instigator on the court. He was ejected with the Knicks during the preseason this year for doinking Justin Anderson with the ball.

Morris also faced allegations of dirty play when he hit Ben Simmons with a knee to the head during the regular season.

One thing is for sure: Doncic won’t miss facing him. Doncic was asked about Morris after the Game 6 loss to end the series and didn’t hold back.

“Terrible foul,” Doncic said. “Two games in a row he did something like that. I really hoped the first one wasn’t on purpose but looking back at the foul this game, you know what I think. I don’t want to deal with that kind of player.”

Mavericks’ Luka Doncic on Clippers’ Marcus Morris ejection: “Terrible foul. Two games in a row he did something like that. I really hoped the first one wasn’t on purpose but looking back at the foul this game, you know what I think. I don’t want to deal with that kind of player.” pic.twitter.com/em8UgPGjlB

Of course, Morris couldn’t let the series end without taking one last swipe. When an Instagram account posted a graphic with Doncic’s quote, Morris commented: “Cry me a river. Clips in 6.”

The Clippers are off to round two, and you can bet the officials will be keeping a close eye on Morris when it begins. Morris just better hope his shot keeps falling offensively as frequently as it did against Dallas. His antics will get tiring very quickly if it’s all he’s contributing.