This year. Maybe this year. There was a sense that Lyon’s vice-like grip on the Champions League trophy was loosening. Maybe. Possibly that stranglehold had relaxed, that now the French behemoths had only one firm hand and four fingers on silverware they have colonised for the past four seasons. There are signs, not of Lyon slackening, but of the competition closing the gap.

Shorn of the talents of the Norwegian sensation Ada Hegerberg, dominant centre-half Mbock Bathy and midfield lynchpin Amandine Henry due to injury for this mini-tournament in northern Spain, there was an optimism that 2020 might see someone other than the familiar, towering figure of Wendie Renard hoisting the trophy aloft.

Wolfsburg, Europe’s “second team” for some years, hardly represented a shock challenger to Lyon’s hegemony – they won the trophy in 2013 and 2014, after all.

However, the German side have been relegated to bridesmaid status emphatically by Lyon in recent years – Lyon had eliminated Wolfsburg from the Champions League in each of the last four seasons prior to Sunday.

Lyon didn’t sparkle in victories over Bayern Munich and Paris Saint-Germain in the quarter- and semi-finals. Instead it was muscle memory that saw them through, the rarefied air of “been there, done that and now we own the T-shirt stall”.

“Wendie Renard [the captain] and Sarah Bouhaddi [the goalkeeper] have played all eight of Lyon’s Champions League finals,” the French football journalist Romain Ballard tweeted before the game. “That is 840 minutes or 14 hours of final [experience].”

Wolfsburg are a women’s footballing powerhouse and even they cannot match the pedigree of their opponents. The Wolves had looked in excellent condition in the build-up to this final, which, added to Lyon’s injury problems, meant that there was a sense that now was the time to interrupt their hegemony.

Such hope was dashed in a clinical opening 45 minutes from Lyon. The left-back Sakina Karchaoui fizzed down her side of the pitch with intent; but Wolfsburg were undone on their own left-hand side. Delphine Cascarino and Lucy Bronze overloaded Lyon’s right flank, ganging up on the Wolfsburg left-back, Sara Doorsoun-Khajeh, who later went off with a twisted ankle [and no doubt some twisted blood too].

It was Cascarino who smuggled her way to the byline again on the right in the 25th minute and pulled the ball back to Eugénie Le Sommer in the area. Her initial effort was saved by the feet of Friederike Abt in the Wolfsburg goal but Le Sommer was the quickest to react and turned the rebound home. Two minutes before half-time Lyon scored the second goal that their dominance deserved. 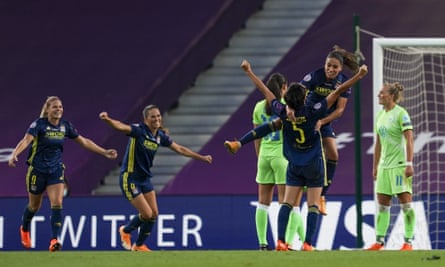 Cascarino again tossed a cross into the Wolfsburg area which a panicky German defence failed to deal with and the Japanese midfielder Saki Kumagai drilled the ball into the bottom corner from the edge of the area.

For all the talk of the gap potentially closing at the top, Lyon were making short work of their closest challengers.

Playing through Wolfsburg’s famed high press, Lyon’s confident start to the second half was punctured on 58 minutes. Wolfsburg clawed their way back when a third Lyon goal looked more likely.

Fridolino Rolfö’s cross was only half-cleared by the Lyon defence, Ewa Pajor hooked the ball back into the six-yard box and Alexandra Popp popped up to head the ball in. Now Lyon made their peerless big-game experience count in a different way, carefully repelling Wolfsburg as they summoned a second wind.

Lyon withstood Wolfsburg’s advances and made the game safe on 88 minutes when Abt could only punch a corner to the feet of Le Sommer. She drove the ball back towards goal and Sara Björk Gunnarsdóttir, a Wolfsburg player until eight weeks ago, hooked the ball into the net. The Icelandic international earns the unique distinction of being eligible for both a winner’s and a runner-up medal having played three games for each finalist in this season’s competition.

For all the talk of the gap to Lyon closing, the now seven-times European champions took care of business in much the manner they always do. No Hegerberg, no Henry, no Mbock, no Parris for the final, no problem. And it’s back to the drawing board for Europe’s chasing pack.