After Lovecraft Country’s first episode aired a fortnight ago, most of you here on the blog seemed to agree with my rave review. Still, scepticism abounded in the comments over two points in particular: 1) the extent to which Jim Crow-style segregation and brutal racism existed in the US’s northern states during the period; and 2) whether the monsters put the frighteners up us as much as a true horror fan expects, nay demands.

The third episode, Holy Ghost, offers up definitive answers on both points. This haunted house tale was the scariest yet, due to some spectacularly realised ghouls and because of the many ominous nods to real historical cases of redlining, unethical medical experimentation and lynchings. After three weeks of doing background research for these recaps, I’m learning that however outrageous an aspect of Lovecraft Country’s fictionalised racism may seem, there’s almost always a comparable real event from US history that many times worse. 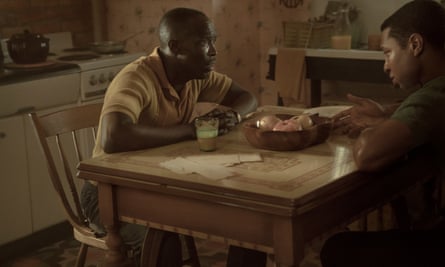 We opened at George’s funeral (RIP my hopes of a speedy Courtney B Vance reanimation), with another of the spoken-word soundtrack choices that Lovecraft Country is making a speciality (see the listening guide below). Then, signalling the start of a new story arc, a title screen: “In the summer of 1955, a group of negro men … moved into a house in the North Side of Chicago. Ten days later three people went missing inside the house …”

Cut to a sunny day in a North Side neighbourhood, as an excitable Leti leads her wary sister to a gothic-looking pile with boarded-up windows and dust everywhere. It’s a fixer-upper to say the least. Yet Ruby is worried less by the necessary structural updates to the house and more by the necessary structural updates to American society. Her younger sister wants them to be black “pioneers” of integration and she is not so optimistic. “Just last year there was almost a riot across town because a negro couple moved into an all-white building.” (Google “Trumbull Park Homes race riots”.)

Meanwhile, back on the South Side, life is not easy for the family George left behind. Tic has been staying with George’s widow, Hippolyta (Aunjanue Ellis), but having worn out his welcome, he drops by Montrose’s apartment. Montrose is not in a good way either, drunk in the middle of the day, and reliving a memory from his and George’s youth, so well-worn that even Tic can recite it. “Those white boys had you surrounded. Out of nowhere came a mysterious stranger swinging a bat like Jackie Robinson, hit home runs on all their heads, saving you both, and all he said before disappearing was …” – and Montrose pitches in: “I got you, kid.”

This brief moment of father-son bonding ends with a row over what to tell Hippolyta about George’s death. Montrose wants to stick with their cover story; Tic feels she deserves the supernatural truth. As these two big men square up to each other, it becomes clear that Tic won’t be sleeping on the couch, after all.

And who just happens to have a spare room going? Amid the bustle of moving-in day at Leti’s recently acquired crumbling mansion, Tic turns up to announce his return to Florida. He is persuaded to stick around when Leti’s new neighbours launch their harassment campaign with a cacophony of blaring car horns. So when strange things start happening in the house, Leti naturally assumes it is the local segregationists up to mischief. Or is it ghosts? Tic picks up a baseball bat and heads down into the basement to investigate (he’s got her, kid). 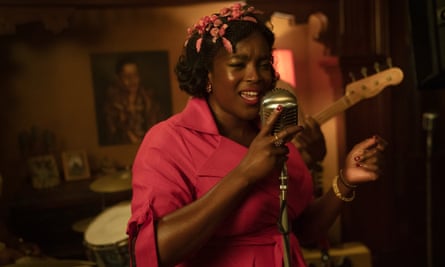 We get another chance to see Wunmi Mosaku perform as Ruby. Photograph: HBO/Elizabeth Morris/HBO

Those ghosts and/or nuisance neighbours don’t let up on the night of the housewarming party either. But there is so much else going on – sexual tension between Tic and Letitia, more roof-raising R’n’B from Ruby’s band and gossip about “that newcomer preacher” Martin (Google “Betty Moitz”) – that it takes an actual burning cross on the lawn to focus the partygoers’ attention. This time it is Leti who picks up the baseball ball, and starts smashing up a row of racists’ cars.

Any kind of fightback would be dangerous in this neighbourhood, but what is powerful about Leti’s Lemonade moment is that nobody tries to hold her back. Instead, wordlessly, Tic and other men grab guns to ensure she’s allowed to finish and, when she has done, Ruby quickly collects the incriminating evidence in her boot and drives off to dump it. They’ve got her, kid.

So what’s the deal with “the Winthrop House”, as the Leti’s arresting officer dubs it? It is haunted by the the souls of eight black South Siders, kidnapped and supplied to the previous owner Dr Epstein for experimentation, that’s what. (Google “Tuskegee syphilis study”.)

Dr Epstein was a follower of Horatio Winthrop – one of Titus Braithwaite’s old cultist chums – and the money for the house found its way to Leti via an elaborate Christina Braithwaite ruse. But Leti doesn’t know that. She thinks it was an inheritance from her and Ruby’s mother, leading to a big blowout row between the sisters (Great to see Wunmi Mosaku back after last episode’s absence).

At least Leti still has Tic. And also a voodoo exorcist on speed dial, apparently. (I was reminded of the fate of the uncle in Lovecraft’s The Shunned House.) Laying these lost souls to rest also has the bonus effect of solving that troublesome neighbours problem.

Elevaphobia (n) is defined as an irrational fear of elevators. If you didn’t suffer from it before this episode, you do now. 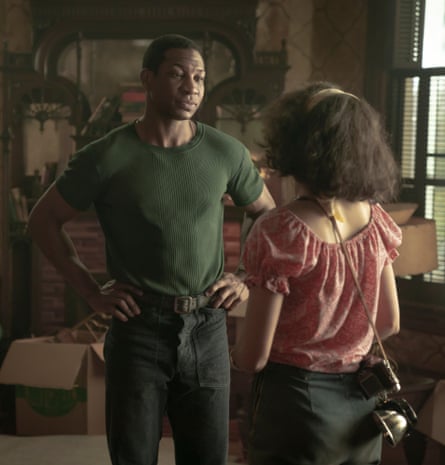 Tic and Leti finally get it on. Photograph: HBO/Elizabeth Morris/HBO

Did you think we were going to have to make do with the hand-squeeze in the basement, lovewatchers? Hoo boy! This is the episode where Tic and Leti finally consummated their attraction, albeit via a frantic bathroom fumble, with a ghostly voyeur lurking in the corner. Not everyone’s idea of romance.

Quote of the week