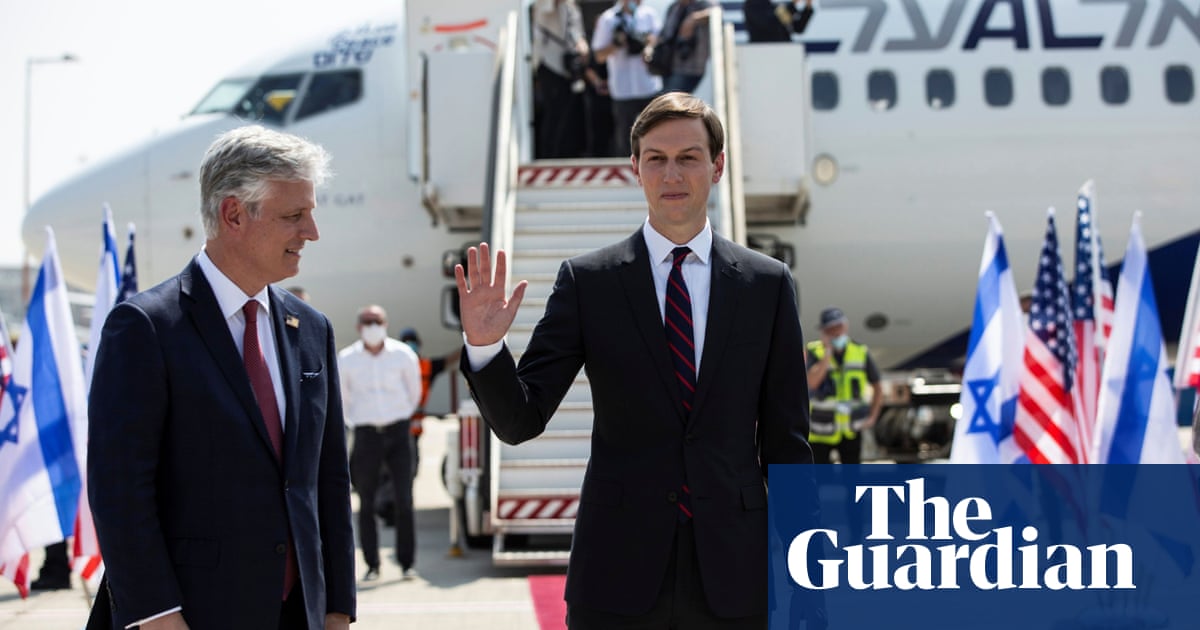 The first direct commercial airline flight between Israel and the United Arab Emirates has taken off, carrying a high-ranking American and Israeli delegation from Ben-Gurion airport to Abu Dhabi and marking the implementation of a US-brokered deal to normalise relations between the two nations.

“This is a historic flight. We hope that this will start an even more historic journey for the Middle East and beyond,” said the White House adviser, Jared Kushner, before boarding.

Announced on 13 August, the normalisation deal is the first such accommodation between an Arab country and Israel in more than 20 years and was catalysed largely by shared fears of Iran.

Palestinians were dismayed by the UAE’s move, worried that it would weaken a long-standing pan-Arab position that called for Israeli withdrawal from occupied territory – and acceptance of Palestinian statehood – in return for normal relations with Arab countries.

Israeli and US flags were on the tarmac beside a red carpet leading to the plane, which had the word “peace” printed in Arabic, English and Hebrew above a cockpit window.

The plane flew over Saudi Arabian airspace in another first for Israel that signalled at least an acquiescence by the kingdom for the UAE’s move. Saudi Arabia’s King Salman has maintained his country’s boycott of Israel in support of Palestinians obtaining an independent state. Any long-term flights between Israel and the UAE would require Saudi clearance to be profitable.

The deal makes the UAE the third Arab nation to have full relations with Israel, after Egypt and Jordan. But unlike those two nations, Israel has never fought a war against the UAE and hopes to have much warmer relations.

On an overnight visit to Abu Dhabi, officials will explore bilateral cooperation in areas such as commerce and tourism, and Israeli defence envoys are due to visit the UAE separately. The UAE minister of state for food and water security, Mariam bint Mohammed Almheiri, said on Sunday she had had her first conversation with Alon Schuster, Israel’s agriculture minister.

The advent of open discussions follows years of cooperation behind the scenes, but no other Arab state has followed Abu Dhabi’s lead.

The US secretary of state, Mike Pompeo, led a lightning trip last week to Israel, Sudan, Bahrain, the UAE and Oman, but failed to win immediate support for future peace deals.

Abu Dhabi claimed its deal stopped Israel from annexing parts of the occupied West Bank, although the unilateral step touted by Netanyahu was widely seen as already off the agenda.

Annexation was outlined in a US peace deal unveiled in January, which paved the way for a Palestinian state with limited autonomy and was wholly rejected by the Palestinian Authority.

Hanan Ashrawi, a senior Palestinian official, accused the US administration of using the UAE deal to try to secure votes for Donald Trump in his re-election bid.

“It must be quite demeaning for Arab leaders to be asked to join a meaningless White House spectacle,” she tweeted, amid reports a formal signing ceremony will be held in Washington next month.