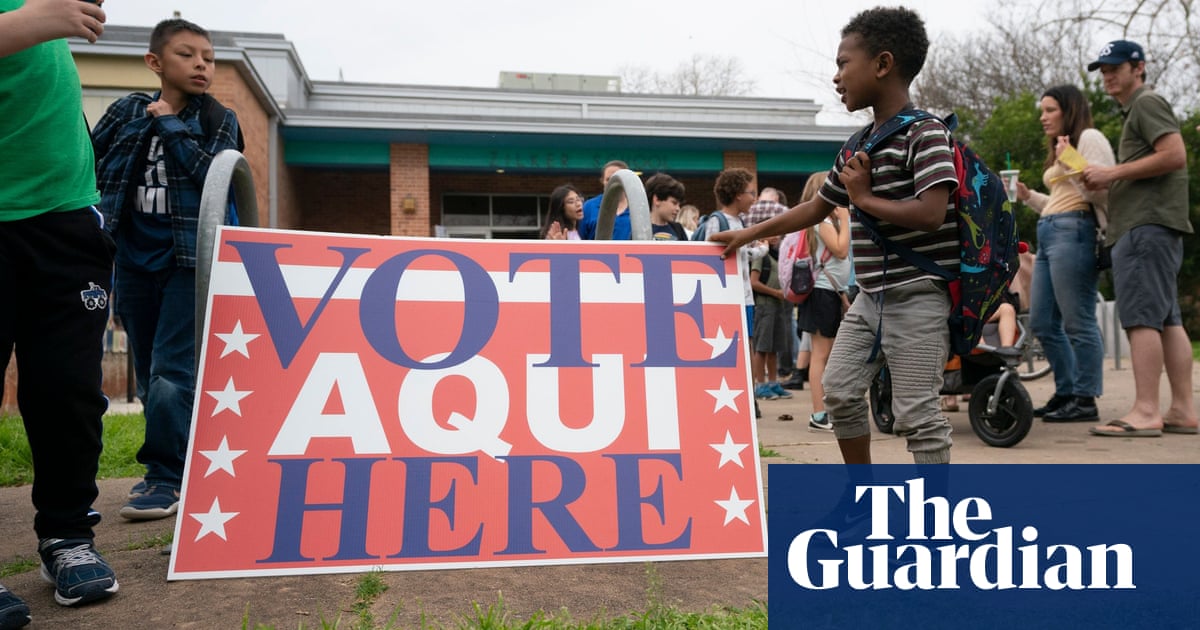 As the United States barrels toward the presidential election in November, could Democrats possibly come out on top simply through a massive effort on voter registration? They think they can, and Texas is key.

Although Donald Trump is still favored to win the Lone Star state, a number of recent polls show the Democratic nominee, Joe Biden, not only in the running but pulling ahead, fanning long-held leftist ambitions of turning the famously red stronghold blue.

Trump v American democracy: the real battle on the ballot this November

“There literally is not a path to the White House for Donald Trump without winning Texas,” Warford said. “So yes, we think we can register [enough] folks and flip the state for Joe Biden, and yes, that would secure a Biden presidency.”

With Texas’s 38 electoral college votes seemingly in play, Monday marks the launch of Texas Voter Registration Week for Democrats, an inaugural event pioneered by the state party in collaboration with major political campaigns and other groups that register young people.

Their combined goal is to contact a million unregistered voters – the most extensive weeklong voter registration push in Texas Democratic party history.

“We’re excited our volunteers are working across Texas to register so many new voters,” MJ Hegar, the Democratic nominee challenging incumbent Republican Senator John Cornyn, said in a statement.

“By mobilizing millions of Texans this November we will elect servant leaders up and down the ballot who embody Texas values.”

This week, a legion of phone and text “bank” operators – telephonic campaigners – are reaching out to likely Democrats, focusing especially on communities of color and young people. Unregistered voters in Texas skew disproportionately Democratic, said Warford; according to the party’s internal modeling, there are an estimated 2.6 million to 3.5 million unregistered Democrats statewide.

“I think the rate that the state of Texas is changing is just, like, really hard for anyone outside of Texas to understand,” said Warford. “If the electorate was reflective of the diversity of the state today, Democrats would be in power in Texas.”

Since November 2018, when Beto O’Rourke, from El Paso, the border city in the west of the state, lost a US Senate seat by fewer than 215,000 votes, the state’s electoral rolls have picked up about 600,000 voters, according to the Houston Chronicle.

Texas Democrats have mounted their largest voter registration program to date, and committees dedicated to electing Democrats are funneling unprecedented investments into the state as it becomes noticeably competitive.

“We’re in the battle basically for the soul of America,” said Brooklynne Roulette Mosley, a senior Texas operative in the Biden campaign. “The election’s gonna belong to those who show up.”

Texas has a record of low voter participation; in 2016, only 51.4% of the voting-eligible population cast a ballot, according to the United States Elections Project, one of the most deflated turnouts across the country.

During the 2018 midterms, Texas still ranked among the bottom 10 states in terms of the turnout rate among eligible voters, despite a double-digit spike compared with four years earlier.

Texans also encounter elevated barriers to voting, according to a Guardian analysis. Before even going to the polls, constituents are supposed to procure an acceptable form of identification and register to vote at least a month in advance. Voters either have to register in-person or by mail, despite a recent judicial ruling that lack of access to voter registration while renewing a Texas driver’s license online violates the National Voter Registration Act.

The state’s stringent voting protocols have become even more germane amid the coronavirus pandemic and concerns about the efficacy of the US Postal Service. Despite the public health crisis, attempts by Texas Democrats to expand eligibility for mail-in voting ahead of election day have proved unsuccessful, and meanwhile, critics believe Trump is intentionally handicapping a faltering USPS to sabotage mail-in ballots.

“I think ‘early’ is the theme of the 2020 election, right?” Warford said. “We’re really just encouraging people to try to do everything early, just to make sure there’s enough time.”

Even with an uphill climb to the White House, the race will be tight in Texas this year, Mosley predicted, and reaching out to eligible voters could help to shore up victories for Democrats. Texans are eager to get registered, according to Warford, and a lot of people want to register others as well.

“They’re ready to go to the polls,” he said, “and try to defeat Donald Trump.”