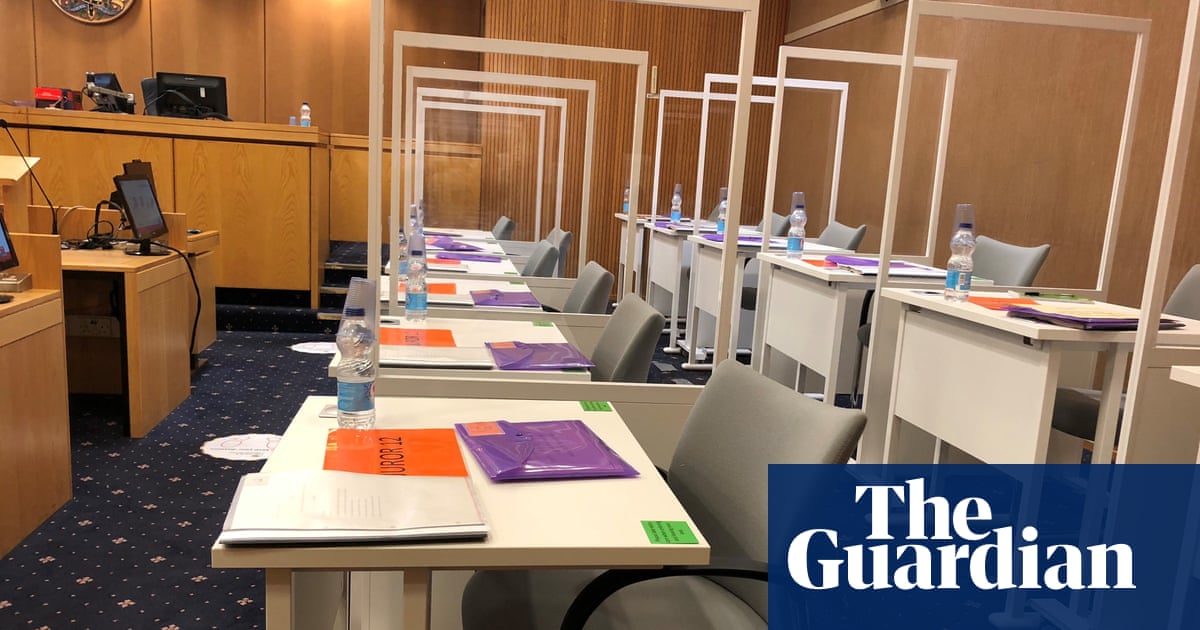 The criminal justice system in England and Wales is facing the triple threat of a shortage of defence lawyers, financial shock as furlough assistance from the government ends and the mass postponement of trials due to the coronavirus pandemic.

With judges postponing trials as far ahead as 2022 and some refusing to remand suspects in custody when time limits are repeatedly breached, pressure is mounting on the Ministry of Justice to open more emergency courtrooms that will operate safely during the crisis.

Even before coronavirus struck, the failure to increase legal aid fees led the Law Society to warn that criminal defence solicitors could soon become “extinct” in parts of England and Wales. The number of defendants who have had to represent themselves – because legal aid entitlement thresholds have not been raised for years – has been growing.

Lockdown has also led to some solicitors being placed on furlough as courts across the country closed; that financial support ends in October.

Financial pressures have escalated as the Legal Aid Agency (LAA) cuts its “standard monthly payments” to criminal law firms to protect cashflows; with insufficient work being invoiced, the agency has begun reducing payments. Earlier this month the law firm Irwin Mitchell warned that 110 jobs were at risk.

Simon Davis, the president of the Law Society of England and Wales, said: “A profession which was already perilously underfunded before the pandemic – with defence firms sinking at alarming rate – has been plunged into even choppier waters by Covid-19.

“We believe it is inappropriate to make drastic cuts to standard monthly payments at a time when many criminal legal aid firms are hanging on for survival and defence solicitors are needed more than ever, given the huge backlog in criminal cases.

“Such cuts will only lead to redundancies and firms shutting down. Without government support, criminal defence firms may not be there when justice is needed in the future, leaving victims in limbo and the accused potentially deprived of a fair trial.”

Ian Kelcey, a Bristol solicitor who is co-chair of the Law Society’s criminal law committee, said: “There’s a real risk that lawyers will be made redundant because the work is just not there at the moment.”

He said redundancies combined with more senior solicitors retiring could “create a major problem for the government [if there’s no one to defend those charged]. The CPS has also been taking on more lawyers who want the security [of a regular salary].”

The prospect of job losses amid a mountain of uncompleted criminal casework may seem paradoxical but is explained by the growing backlog.

In March, the number of cases waiting to be heard in crown courts in England and Wales was just below 40,000. By late July, that figure had risen to 43,676. The total backlog in crown and magistrate courts has ballooned to 560,000 cases.

The backlog predates Covid. Cuts to judges’ sitting days, imposed over recent years to save expenditure, slowed the pace of criminal justice.

To address the backlog, some former judges and lawyers have called for no-jury trials, like Diplock courts in Northern Ireland, to overcome the difficulties of social distancing.

The MoJ is holding in reserve plans for smaller juries or a judge sitting with two magistrates. Such changes would involve at least secondary legislation.

Instead the aim is to speed up the re-opening of courtrooms by using plexiglass partitions to separate jurors. The 2-metre, physical distancing rule has been relaxed to “1-metre plus”. Portacabins in courthouse car parks are being considered.

Longer operating hours, piloted in Liverpool, may be extended to other courts and 10 emergency “Nightingale” courts in new premises are being created.

The immediate problem is that trials are already being listed as far ahead as July 2022.

Earlier this month a judge at Woolwich crown court refused to extend custody time limits for a third time for a suspect in a drugs case and released him on bail.

Judge Raynor said: “The delays in bringing cases to trial which are being experienced by the courts will not be alleviated by the current steps that are being taken by Her Majesty’s court service.”

The Criminal Bar Association, which represents barristers, echoed his warning: “We are now pushing at the edges of the basic tenets of the rule of law and ensuring that people are not held without trial indefinitely,” said a spokesperson.

David Lammy, the shadow justice secretary, said: “Labour has been clear since day one of this crisis that the government needs to act urgently to prevent the collapse of the courts.

“The justice system had been pushed to the brink even before the pandemic, by 10 years of Tory cuts, court closures and reduced sitting days. The Ministry of Justice’s incompetent response to this once-in-a-generation crisis has been to ignore Judges, fail to support legal aid lawyers, and not deliver on its promises to provide adequate emergency court space.”

An MoJ spokesperson said: “More than 90% of court buildings are open and we are boosting capacity across the estate so cases can be heard as quickly as possible – dates set aside this far in advance are provisional and often brought forward.

“Decisions to extend custody time limits are a matter for independent judges, who will look at the circumstances of each case taking into account time served and the severity of any crimes.”