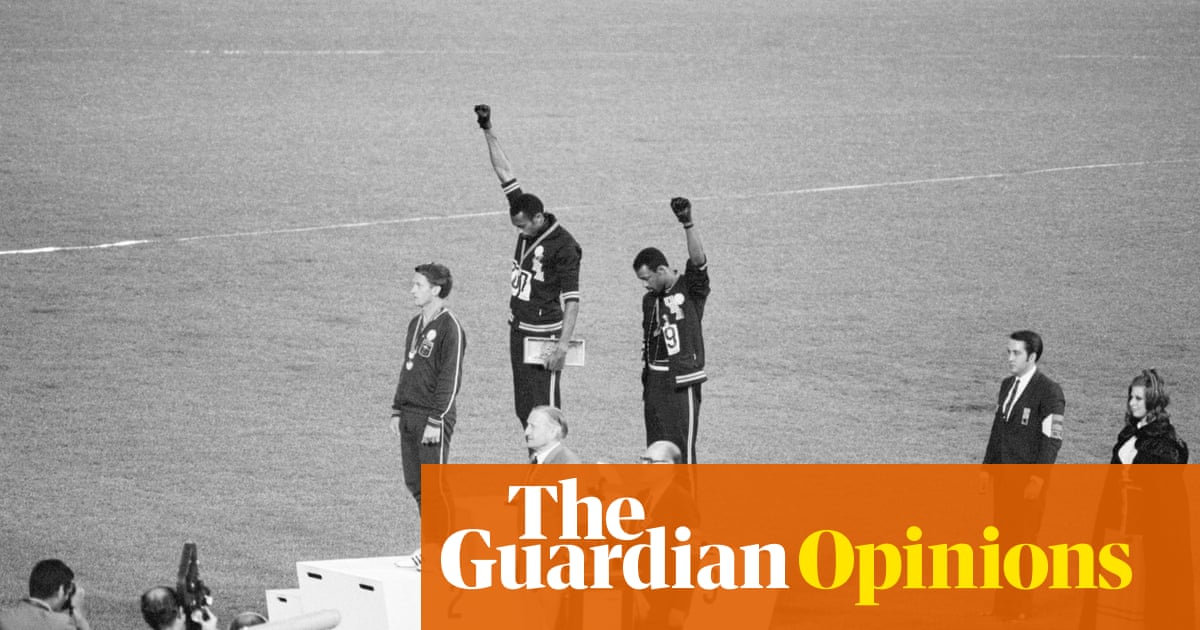 Chaos on the streets. Poison seeping into minds. Athletes speaking out against racial injustice being vilified as villains by those in power. Right now 2020 looks a lot like 1968, recast and rebooted.

Certainly when LeBron James and other NBA stars went on strike last week, they were standing on the shoulders of giants of that era. And two in particular: Tommie Smith and John Carlos, whose podium protests at the 1968 Olympics are the subject of a timely and vital new film, The Stand: How One Gesture Shook The World.

In the Guardian’s report on the 1968 Olympic 200m final, won by Smith in a world record 19.83sec despite a groin strain, it described the two Americans as “the black power disciples”. But, as the film makes clear, when Smith and Carlos jabbed the Mexico air with two gloved fists while the Star-Spangled Banner played they were doing so to highlight racial injustice, and to call on America to finally live up to the values set out in iron gall ink in its constitution. Nearly 52 years later they are still waiting.

“It wasn’t about destruction and tearing America down or blowing up the Statue of Liberty,” says Carlos. “We were just letting them know that we are a powerful force not just merely in the track but in society, you’re going to have to accept us as being a part of society.”

Overnight it became an iconic image. But other parts of the protest were missed, including how both men wore black socks with no shoes to symbolise poverty. Smith also had a black scarf as a sign of black pride, while Carlos was wearing beads to represent those who had been lynched throughout the south. It was also, as the film reveals, largely spontaneous. In fact, both men only decided on the exact form it would take while waiting to collect their medals. “I felt something was needed to emphasise solidarity and strength,” says Smith in the film. “Not black power sign. Not that at all. Solidarity and strength.”

But such subtleties were lost on the International Olympic Committee and most of white America, as after the fists came the fury. The writer and broadcaster Brent Musburger referred to the athletes as “black-skinned storm troopers”. And within 48 hours they had been kicked out of Mexico at the urging of the IOC president Avery Brundage – a man who, coincidentally, repeatedly defended Nazi Germany before and after the 1936 Berlin Olympics. Then came the numerous death threats, with Smith fearing for years after that every little crack he heard was a rifle bullet.

Later the stress and pressure was a factor in their marriages breaking down and Carlos was subsequently forced to work in what he considered demeaning jobs, including as a park groundskeeper and a nightclub bouncer. Muhammad Ali, who knew a thing or two about protesting, called what Smith and Carlos did “the single most courageous act of the century”. He might just have been right. Meanwhile Peter Norman, the Australian who stood with them on the podium having won a silver medal, was also treated like a pariah and cut from the 1972 Olympics despite having run the qualifying time.

Shamefully the IOC has yet to issue an apology to the three men. It also continues to stress to athletes that sport and politics should stay separate – which is a bit rich from an organisation whose zeal in squeezing every pith of propaganda from the combined Korean team at the 2018 Winter Olympics would have impressed Leni Riefenstahl.

More fundamentally, the IOC should understand that all this is not so much about politics but fundamental human rights. And while it has made belated noises about consulting athletes about reforming Rule 50, banning protests, the rule is still in place. Which means that, as things stand, anyone who emulates Smith and Carlos next summer in Tokyo will be on the wrong side of the IOC but the right side of history.

The IOC could also learn from the NBA, which over recent days has worked with its players on a range of proposals to bring about social justice. They include establishing a coalition that will focus on access to voting for the 3 November presidential election, promoting civic engagement, and advocating for meaningful police and criminal justice reform. Yet still the IOC wants athletes to know their place, and stay in it. Perhaps they should heed the words of Martin Luther King Jr, which begin the film: “Three hundred years of humiliation, abuse and deprivation cannot be expected to find a voice in a whisper.”

The Stand ends with Harry Edwards – the sociology professor who inspired the 1968 protests by founding the Olympic Project for Human Rights – talking about the modern-day protests led by Colin Kaepernick and the NBA stars. “There has been a change,” he says. “Whether there has been progress is a different discussion.”

Incidentally last weekend Carlos told the New York Post that he felt invigorated by seeing the WNBA and NBA players speak out. “These women as well as men became my heroes,” he said. “I wanted to knock all the stuff I had off my mantelpiece and put each and every one of them on my mantelpiece as someone I should commemorate, cherish, respect and honour. They’re my heroes.”

Smith and Carlos were, of course, the original athlete superheroes. It’s just a shame that it took sport and society so long to realise it.