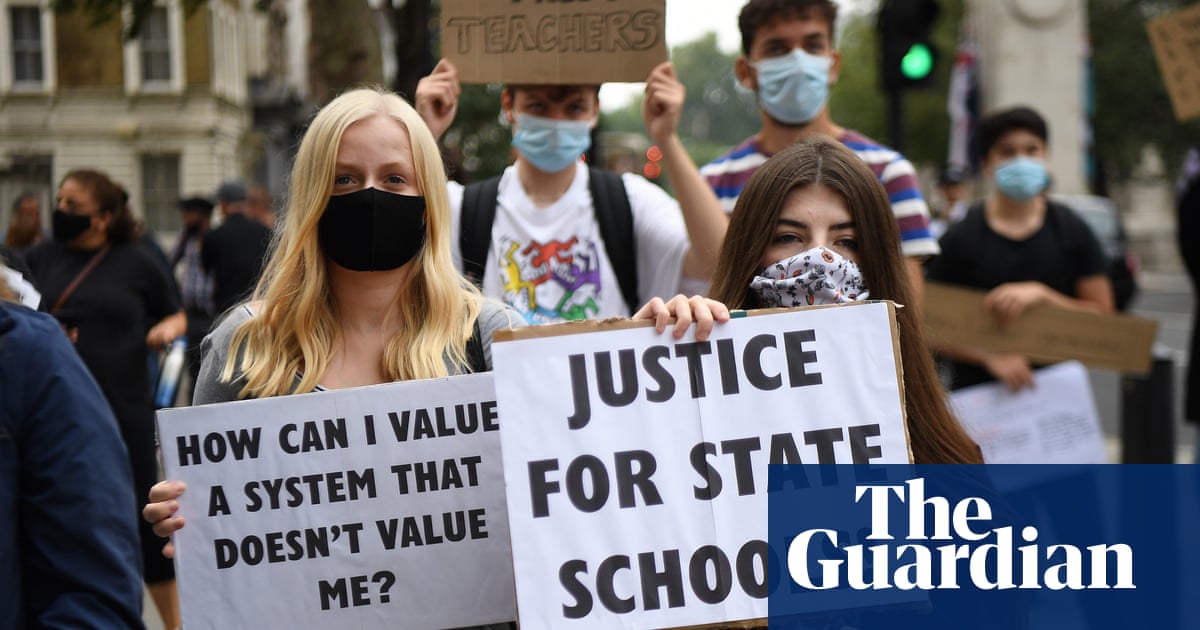 As thousands of A-level students in England seek to replan their futures after being downgraded by an algorithm, some have spoken of feeling cheated and as if they can never recapture their dreams.

For Leah Glenday, 18, in Essex – the first pupil from her school to be offered a place at Cambridge – the system’s bias towards private schools with more resources than state schools has been exposed. And she has no hope in appealing.

Her school, West Hatch High School, had given her predicted grades of A*AA, which she had achieved in her mock exams, but she was awarded ABB and lost her place at the prestigious university to study law.

She said: “It’s so upsetting as I was planning and had always dreamed of going to Cambridge. I’m disappointed because I know I would have received higher grades if I’d sat the exams myself. They’re not giving children a chance to succeed. My school has never been high-achieving.

“I want to be a barrister specialising in family law to help people going through similar experiences to ones I had when I was younger.”

Her foster father, Ian Dyer, said: “It’s like disappointment mixed with tragedy when it should have been a story of triumph. To have it snatched away from her by a government algorithm, we feel she has been cheated.”

Dyer told of Glenday’s difficult early years and that she could not properly read or write when he fostered her almost a decade ago. She has been accepted by her insurance choice, Warwick, but intends to appeal, though she is not confident about being successful.

She said: “Its biased and it’s not helping people actually trying to turn their lives around and make change. They’re putting a stop to it and not giving us a chance.”

As the anger felt across the country crystallises and confusion grows over the nature of the appeals process due to a lack of clarity, an A-level student who missed out on a top veterinary school after being handed three D grades launched an attack on the schools minister, Nick Gibb, on live radio for “ruining my life”.

Nina Bunting-Mitcham, who attended a state college in Peterborough, said she was predicted to achieve ABB and scored As and Bs in her mock exams, but she failed to meet her offer from the Royal Veterinary College.

On Friday evening, she appeared on Radio 4 on a show with Gibb, who assured her the appeals process would see her expected grades be reinstated. But, as she fought back tears, she was not satisfied by his promise.

“When I said, ‘You’ve ruined my life, I received a heartless response back’,” she said on Saturday. “He just kept regurgitating that the system is robust but said later on there have been mistakes. How can the system be robust when there are mistakes?”

Of her appearance on the programme, Bunting-Mitcham said: “I was speaking up for everyone who has been put into this situation. How is it that all the grades at independent and private schools have gone up and lower-attaining schools have gone down? It’s not a standardisation, it’s a classist algorithm.”

In Croydon, Saher Afzal, 18, said she was the first in the history of her school to get an Oxbridge offer. But her “centre assessment grades” of A*AA were downgraded to A*CC.

She said: “What was meant to be the best day in my life became the worst. I feel cheated and disgusted by the government and will fight for the results I deserve and the place I earned.”

Afzal went to a protest in London on Saturday and met a girl who received EDC after being predicted AAB. “People were so angry, you could just feel the heartbreak in the air,” she said. “The government has robbed young people of their futures.”

Over the last 48 hours, she said she had experienced every possible emotion, culminating in her Oxford college contacting her to extend an unconditional offer – for the 2021-22 academic year as accommodation is already full.

“It just hurts because if I’d got the grades this year I could have gone,” she says. “It wasn’t my initial plan to be forced to defer a year. But I’m not going to let it get to me.”