The web of lanes just west of Padstow are home to any number of holiday parks whose static caravans, chalets, motorhomes and pod-like accommodations are a reminder that the British have always liked to socially distance while on their seaside holidays.

The new Pig at Harlyn Bay – the group’s seventh hotel – adds four smart shepherd’s huts to this offering, all set back from the coast in almost five hectares (12 acres) of lawns, organic gardens and wheatfields. I visit with my partner, Kathryn, a couple of days before the public opening, and we check into number four, a beautiful and spacious hut – they’re called “garden wagons” here – built by Dorchester company Plankbridge. 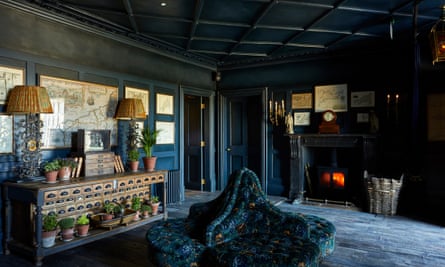 The hotel’s main building is a mansion with sections that date from the 1600s and others from two centuries later. This mix means the windows and ornate ceilings have a Tudor-cum-ecclesiastical feel. Upstairs there are 11 smallish, elegantly furnished rooms. Slate-grey walls generate a moody ambience, and paintings of maritime subjects feature tempestuous seas. A staff member tells us the vibe is down to owner and designer Judy Hutson’s fascination with Cornwall’s stormy weather: one large oil painting on the main staircase was finished in situ so that the artist could ensure the right kind of wave action to liven up the high walls. A pair of two-storey newbuilds – known together as The Stonehouse, and carefully designed to look similar to the old house – have been added at the rear to offer a further 15 bright, airy accommodations. 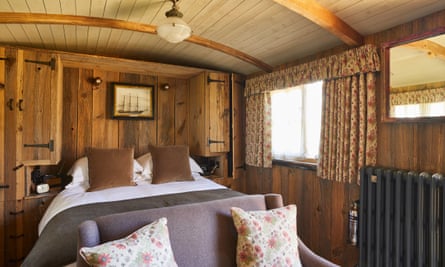 Some items, including hoppy Verdant beers from Falmouth, come from beyond the 25-mile perimeter, and a few key ingredients, such as Loch Duart salmon (smoked on site) and Manx kippers, have to be brought in from afar, but owner Robin Hutson is adamant about keeping food miles down where possible. “I believe the hotel trade does more for local food producers than just about any other sector. There’s no need not to use suppliers in the area,” he says.

I choose a starter of “piggy bits” (honey-sweet crackling with apple sauce plus potted pork), and a “Barnsley” chop as a main: a double loin of tender pork that covers half my plate, served with wild gooseberries and sea beets. Kathryn has mutton with baked lettuce and red wine sauce. The sourcing policy may be worthy and right-on, but the food at the Pig is unashamedly indulgent. 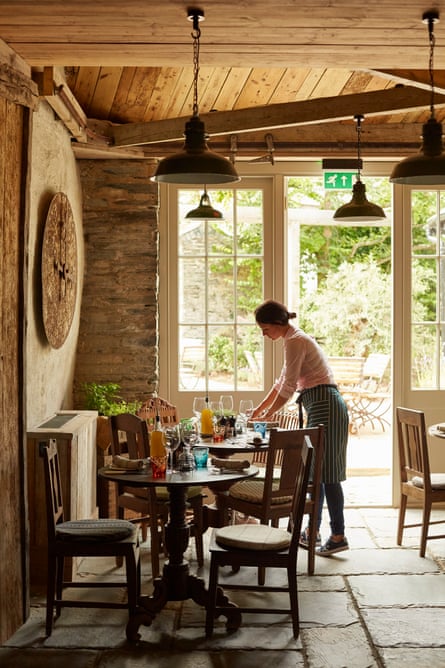 Harlyn Bay’s deep sandy beach – perennially popular with young trainee surfers – is 10 minutes from the hotel, along a footpath through a poppy field. You can get there without walking on the lanes, which is just as well as they can be hairy in high season. Very early morning and late afternoon are the best times to see it without crowds, and low tide is also wisest; high water forces everybody to congregate near the cliffs. The north Cornwall sea is a touch warmer than on the south coast and the wavelets were swimmable.

When the weather is sunny the beaches are too noisy, so we take off on the South West Coast Path towards Padstow. I live in south Devon so know the path well, and this seven-mile section is as good as any I’ve explored. North of Trevone Bay are high cliffs above inaccessible coves and a sea stack around which we see herring gulls enjoying the thermals, fulmars and a strange darker gull I can’t identify. On the higher stretches we see over to Bodmin Moor. After passing Stepper Point – home to a National Coastwatch lookout – at the tip of the headland, we turn to walk south along the Camel River, enjoying a cooling dip at Harbour Cove. Padstow is madness and mayhem, as has been widely reported, but we grab a bag of fish and chips from Chip Ahoy and a local directs us to a shady park unused by tourists. The Pig sends a car to collect us. It is a Land Rover, so perfect for “PadStein”.

For our second day we linger over a slow breakfast at the hotel and enjoy two swims off Harlyn Bay, a look around the newly planted kitchen garden, and lunch at the Pig’s Lobster Shed: an informal alfresco space serving Padstow lobster, North Cornish crabs, and long, sweet chocolate sundaes. It exudes a beach vibe and the sort of cuisine Rick does over in Padstow, but with none of the aggro of either. Both the main restaurant and Shed are open to non-guests who book in advance.

This midweek visit is just what I need after four-and-a-bit months of lockdown. We can mingle or escape to our hut. I imagine many guests will think first of staying in the main house; antiquity and “authenticity”, not to mention TV dramas full of billowing white shirts, have an undeniable pull. But I am as happy as a porker in spa-quality mud in our garden wagon. I’m 6ft 3in, but undergo no headbanging or curved-spine sleep. There is a large roll-top bath as well as a power shower and an outdoor shower with walls made from branches. Call me antisocial, but I currently want to choose how close I am to strangers, and that’s easier in a bespoke wooden shed than in any period building. I can’t see the stormy oil paintings as much as I’d like, but I can hear the sea at night, summer-calm and soothing.

•Accommodation was provided by The Pig at Harlyn Bay, which has doubles from £150 a night midweek, breakfast from £10pp, thepighotel.com