The biggest reintroduction to date of the large blue has led to the rare butterfly flying on a Cotswold hillside where it has not been seen for 150 years.

About 750 butterflies emerged on to Rodborough Common in Gloucestershire this summer after 1,100 larvae were released last autumn following five years of innovative grassland management to create optimum habitat.

The globally endangered butterfly now flies in greater number in Britain than anywhere else in the world, four decades after it became extinct in the country.

Its return to Britain is arguably the most successful insect reintroduction project worldwide, after caterpillars were initially brought from Sweden in an ecologist’s camper van. 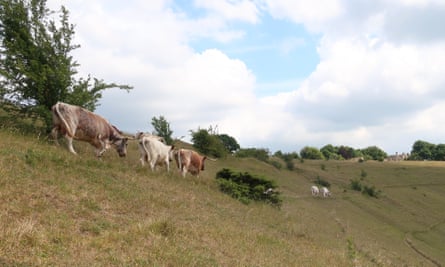 Cattle graze on Rodborough Common. This creates the right environment for a species or red ant that serves as both host and then food for the large blue caterpillar. Photograph: David Simcox/National Trust

Years of painstaking work by Prof Jeremy Thomas and David Simcox led to the butterfly being successfully reintroduced to sites in Somerset and more recently Gloucestershire.

To do so, they first had to understand its unique lifecycle, with tiny caterpillars dropping off wild thyme and being taken underground by the red ant, Myrmica sabuleti, which is duped into believing that the parasitic larva is one of their own.

The ants carry it into their nests to protect the caterpillar, even “singing” to it, before it turns from herbivore into carnivore and feasts on ant grubs through the winter until it is ready to pupate. The butterfly emerges from underground the following summer.

The common, which is owned by the National Trust, first required temporary grazing areas for cattle on steep slopes – where they wouldn’t usually choose to go – alongside the removal of scrub, to create ideal conditions for the red ant. 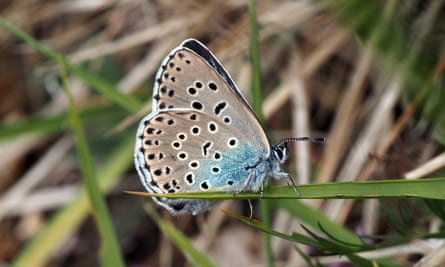 Simcox, a research ecologist and the co-author of the commons management plan, said: “The butterfly needs high densities of the heat-loving red ant … which has a crucial role to play in the lifecycle of the butterfly.

“The grazing cows create the ideal conditions for them by keeping the grass down so sunlight can reach the soil which gently warms it, creating perfect conditions for the ants, which are cold-blooded and therefore need warmth in order to actively scout for food throughout the spring, summer and autumn.”

The reintroduction was a partnership involving the National Trust, Butterfly Conservation, the Back from the Brink project and others. As the climate warms, the large blue should be able to spread northwards, but only if helped to find new habitat.

Richard Evans, a ranger for Rodborough and Minchinhampton commons, said: “Butterflies are such sensitive creatures, and with the large blue’s particular requirements they are real barometers for what is happening with our environment and the changing climate.

“Creating the right conditions for this globally endangered butterfly to not only survive but to hopefully thrive has been the culmination of many years work. None of this would have been possible without the combined efforts of conservationists and the local graziers.”