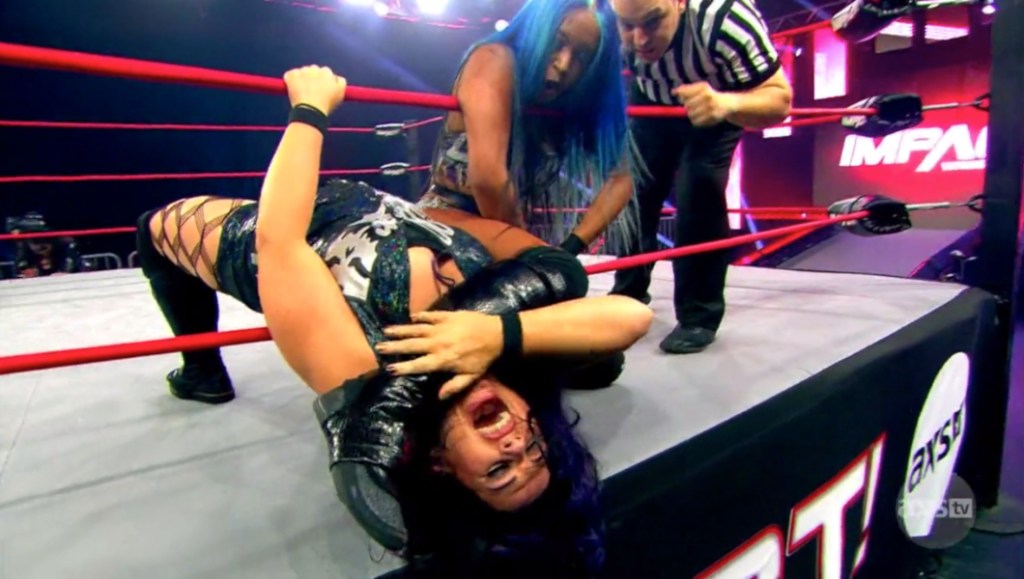 Wrestling without live crowds takes some figuring out. It’s led different companies in different directions, with varying degrees of success. But while WWE is inventing its own counter cultures, and AEW is continuing their impressively long build to Sept. 5’s All Out PPV while keeping their women’s tournament to YouTube, Impact Wrestling is over on AXS TV just putting on pretty solid wrestling shows.

I really enjoyed Impact’s last PPV, so I figured I’d check out the weekly show as they build to their two-week Impact Emergence event. This week’s episode opened in media res, with Willie Mack and Eric Young beating the ever-living crap out of each other backstage. Commentary was quick to give context, although I already figured it was because EY severely beat Willie’s best friend Rich Swann at Slammiversary. Apparently that led Swann to appear on TV and announce his retirement, and Eric showed up to beat him up again.

So it’s no wonder that Mack couldn’t wait for the official start of their match to start fighting with Young. And when they do eventually make it to the ring and the bell is rung, it’s Willie Mack’s desire for violent revenge that leads to his defeat at Eric Young’s hands. Willie Mack is usually a pretty upbeat character, so it’s interesting to see him furious and scowling. He’s quite good at it, and it’s a very intimidating look for him.

There were three women’s matches on this week’s episode, and they each had something going for them. Newly signed indie vet Kimber Lee went up against former champion Jordynne Grace, who is making questionable hair choices lately. Kimber got to show off some of what she can do, but Jordynne got the win, just in time for the announcement that her rematch with Deonna Purrazzo for the Knockouts Championship at Emergence will be a thirty-minute Iron Man Match. Jordynne and Deonna are going to tear it up in two weeks! For a full half-hour!

Not to make it about comparison, but how many years do you think it will be before AEW gives two women a full quarter of the show to have a banger of a match?

There was also a hardcore women’s tag team match, with Kiera Hogan and Tasha Steelz facing Havok and Nevaeh. Unless I missed some crucial recent character development, this is a heel versus heel match, and it certainly seemed like one. Kiera and Tasha aren’t nice people, but Havok and Nevaeh are straight-up monsters. And honestly that sums up my issues with the latter team. I’d like to see more human personality from Havok and Nevaeh, because right now I’m finding it hard to invest in them.

The third women’s match was Susie versus Alisha Edwards, which really wasn’t much of a match, but it was part of “Wrestle House,” which is a recurring segment throughout the show where a bunch of the Impact Roster are living together in an “MTV’s Real World” type situation, but with a wrestling ring in the backyard that they use for settling all disputes. Most of the Wrestle House stuff this week was pretty light, but it did set up a backyard match for next week between Taya and Kylie Rae, and hopefully they give that one some real time, because it ought to be real good. Also, the Susie/Alisha match featured Susie yelling “I have the runs!” which was a great payoff to an earlier bit.

My least favorite thing on the whole show was a segment where Madison Rayne interviewed RVD and Katie Forbes, who are still doing their “inappropriate displays of affection” gimmick that just grosses me out a little. But I imagine it’s supposed to.

I wasn’t wildly thrilled when Brian Myers (WWE’s Curt Hawkins) showed up to challenge Eddie Edwards in the main event. But like Eric Young, and also EC3 and Heath, who both had quick video promos on this episode, Myers is here to try and prove that he can be much more entertaining than WWE gave him space to be. We’ll see how that goes, but it’s nice to see these guys (and Deonna) not just finding work but blossoming in the light of a company that’s thrilled to have pretty much every wrestler they can get, instead of hanging on to a bloated roster just because they can.

Finally, if you’ve watched Impact before, the experience of watching it without a live crowd isn’t much different. That sounds like a dig about Impact’s small audiences, but there’s truth to it — Impact wasn’t in the habit of shooting vast seas of faces to punctuate moments. They already had their hard cam facing the entrance ramp. The only real difference between Impact before COVID-19 and Impact now is that they fired a bunch of problematic people who were outed as part of the #SpeakingOut thing back in June. And that’s a difference I don’t mind seeing.

So if you have AXS TV, and especially if WWE and AEW haven’t been giving you everything you want, consider giving Impact a look. It might not be your thing, but it’s worth letting go of old assumptions and checking it out with fresh eyes.