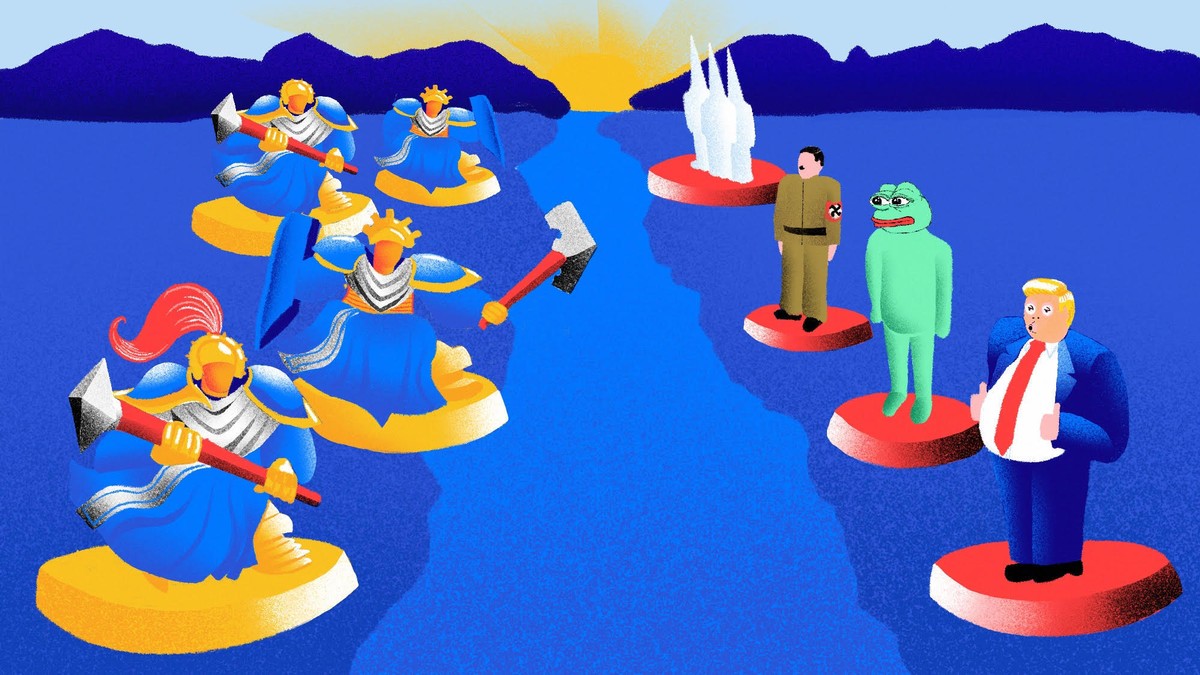 Warhammer 40,000 – often known simply as 40k – has been beloved by sci-fi fanatics since the 1980s. The tabletop wargame, produced by Games Workshop, is a fantasy space where players can become generals of their own futuristic army, locked in an unceasing war on a galactic scale.

In recent years, the game – whose players often congregate online – has attracted a small but vocal alt-right minority. In 2015, the “God Emperor Trump” meme began circulating around 4Chan’s /pol/ board, depicting Trump’s face superimposed on an image of a fictional theocratic ruler from the game. Since then, closed 40k Facebook groups have become a repository of racism and far-right content, filled with Warhammer-themed memes mocking everything from specific ethnic minorities to gender equality.

Partially written as satire in response to the exceedingly optimistic sci-fi of the 1970s, the game takes place in a hopeless, dystopian galaxy where murderous armies run rampant. There’s a conscious borrowing of fascist iconography, structures and practices. For instance, perhaps the most famous group from 40k’s lore, the Imperium of Man, is a bloated, theocratic ethnostate that traverses the galaxy, purging heretics and alien races. “In the grim darkness of the far future, there is only war,” reads the game’s tagline.

Many Warhammer fans are becoming increasingly uncomfortable with the alt-right faction of the fandom flowering in certain online corners. One group taking action is No More Damsels, a charity calling for a more inclusive atmosphere in the London wargaming scene. Members want Games Workshop to outline specific plans to tackle racism, sexism, homophobia and other forms of prejudice in the wargaming community.

Last month, No More Damsels’ co-founder, Sarah Pipkin, helped to write an open letter addressed to Games Workshop, calling out bigotry in Warhammer. “Providing open and clear measures around discouraging hatred and abuse would go a long way towards making the community more welcoming and tolerant for all,” the letter read. “We look forward to your support and seeing the precedent you set by taking repeated and consistent action to address prejudice.”

Although the letter, which was signed by over a dozen wargaming groups, was mostly well-received, No More Damsels expected to receive some online backlash. Players who ask for greater representation and a more inclusive atmosphere in the world of 40k are often targeted by far-right trolls, with little in the way of recourse.

“If there’s a huge pile-on – if you’re getting trolled for being outspoken about wanting to see yourself represented in the lore – there’s almost no one to turn to,” Pipkin explains over the phone. “There was a YouTuber who made a joke about [fictional Warhammer soldiers] Space Marines being gay, who then received death threats for it.”

The No More Damsels open letter didn’t come out of nowhere. It was published in response to a statement issued by Games Workshop on the 4th of June, which committed to diversifying its models and keeping racism out of its stores. “We will never accept nor condone any form of prejudice, hatred or abuse in our company or in the Warhammer hobby,” they wrote.

Although Pipkin says that a broad anti-racist message was encouraging, No More Damsels had hoped Games Workshop would have outlined a more practical response. The group also urged Games Workshop to offer an apology to Josh Mallett, a Black wargamer who has spoken publicly about racist comments he says were made to him by Games Workshop staff at a Warhammer Weekender event. Games Workshop did not respond to requests to comment for this article.

Others believe the company’s marketing strategy may be inadvertently feeding far-right sentiment in the community. Thomas Parrott freelanced for Games Workshop until June, writing novels for its Black Library publishing arm. He thinks that adopting a surface-level narrative of “good guys” versus “bad guys” – in a bid to appease the parents of younger customers who might otherwise be put off by 40k’s cartoonishly grim lore – opens the door to a troublingly simplified reading of the game.

“It is really easy to misinterpret the Imperium [of Man] as being presented as a ‘good thing’, as opposed to what it originally was, which was lampooning the very idea of this totalitarian state,” he says.

But some in the 40k community felt Games Workshop should not have made a statement at all. One such member is Norway-based YouTuber, Arch (known as “Arch Warhammer” until a recent trademark dispute with Games Workshop prompted a name change). He launched an email campaign in July, urging his 200,000 plus subscribers to email Games Workshop and tell them to “keep politics out”.

Arch says he does not identify as a member of the far-right, and insists that he was “genuinely not aware” of any alt-right or fascist section of the 40k community. Rather, he takes the view that Games Workshop’s statement was tantamount to aligning itself with “extremists” who support communism and, he says, advocate violence.

“For me, this is the same kind of dog-whistling that we hear about for the alt-right, where they talk about some of their code phrases,” he explains, via Discord. “This seems to me to be a signal to a very small group of extreme people… What my campaign is saying is that Warhammer is for everyone, full stop.”

Two months ago, screenshots from Arch’s Discord server were posted on /r/Sigmarxism, a left-wing Warhammer subreddit. Multiple people had used racial slurs, while Arch himself referred to Sámi people (an indigenous people of northern Scandinavia) as “gypsy but worse”. Another poster used the term “field exercises” – a term understood in far-right circles as referring to the activities of the Nazi Einsatzgruppen, which murdered thousands of Romani people, Jewish people and communists in German-occupied territories during the Second World War – as a suggested way of dealing with the group.

Prior to the leaks, Arch had made a video in which he referred to the fictional Gnoblar race from the Warhammer fantasy series as “house n*****s”, and another in which he defended the use of the term “White Lives Matter”. Asked about his own use of racist language, as well as dog-whistle remarks on his Discord server, Arch tells me that he doesn’t really concern himself with how “extremists” interpret his speech, and that he will continue to allow “jokes”.

“If you are the most extreme tankie, or even the most extreme fascist, if you simply want to play a game of 40k, not talk about your politics, simply collect the miniatures – I do not view that as Games Workshop’s duty to stop it,” he says. “I view that as the rest of society’s duty to debate against these people and to prevent them via public discourse, and the public opinion.”

Arch’s views aren’t shared by everyone. This includes YouTuber and veteran Warhammer player Leakycheese, who prefers to remain anonymous. He says that ignoring the fascist leanings of certain players will likely prevent new members from becoming part of the Warhammer community. And, worse, it could radicalise young people getting into the hobby as part of Games Workshop’s Schools Programme, by leading them down a “PewDiePipeline” towards extremist and far-right content.

Leakycheese suggests that a positive step would be a sign posted in every Games Workshop franchise, making clear to all customers that prejudice has no place in the community. Some changes to the lore of 40k would not go amiss, either; there should be greater ethnic diversity in models, he says, and it should be abundantly clear that the Imperium of Man aren’t the “good guys”.

“They need to put the satire back into it,” he says. “The other thing they need to do is stop making Space Marines appear as heroes; people on the alt-right think they are superhuman Übermensch warriors – they [Games Workshop] do stuff around that; it just needs to be brought back to the fore.”