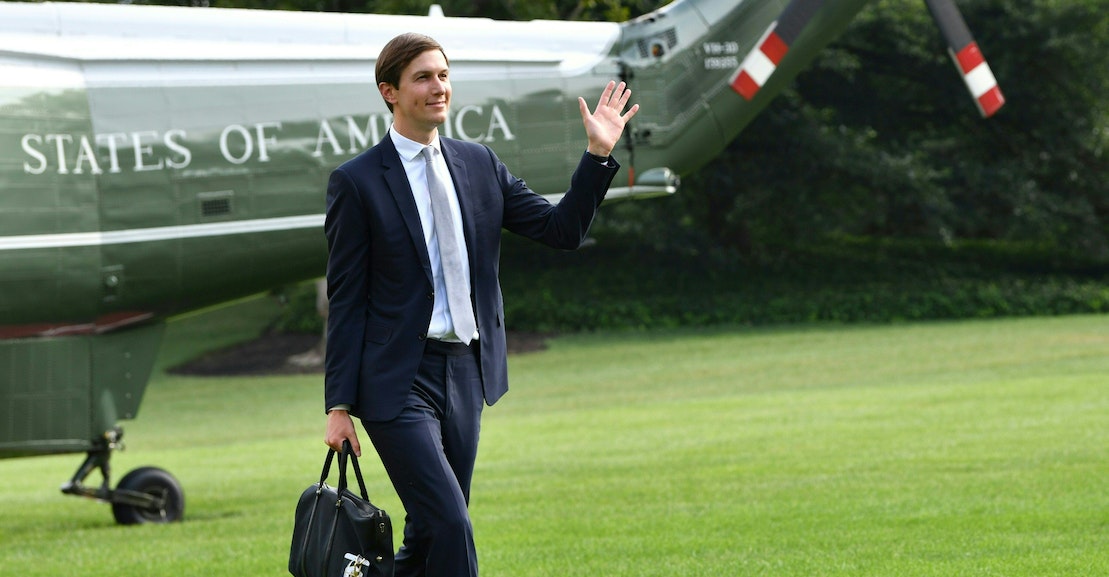 Into this maelstrom of racial animus and nihilism strides Kushner, a bloodless man possessed of a singular genius for locating new petards with which he can hoist himself. Last Thursday, Kanye got on Colorado’s ballot; within 48 hours, he’d gotten a private audience in the state with the permanently wincing White House senior adviser, who started his political career by trying to establish backchannel Trump communications with Russia, and who most recently was excoriated for completely fucking up the U.S. coronavirus response—possibly, it was reported by Vanity Fair, because he reasoned the virus “was going to be relegated to Democratic states” and Trump “could blame those governors” for the resulting mass-deaths.

If one could bracket out the immediately obvious evils of manipulating a man in a mental health crisis for maximum political gain, using Kanye to halfheartedly rig an election would be the perfect Kushner tasking. He has grand ideas about his abilities, as we’ve seen. But this is probably closest to his sweet spot: chumming with celebrities and concocting the stupidest scheme imaginable to keep his extended family’s grift going just a bit longer.

And stupid it is. West clearly can’t file in enough states to be president: He can’t even muster the energy or the organization to appear as serious as joke presidential candidates like Vermin Supreme, the Naked Cowboy, and Tulsi Gabbard. (His campaign reportedly missed Wisconsin’s deadline for signatures by 14 seconds, and is now arguing that the 59 seconds after 5 p.m. do not, in fact, occur after 5 p.m.) Nor are the states where he qualifies all battleground states; nor is it assured in any way, shape, or form that West peels off voters who might have otherwise cast ballots for Joe Biden against Trump: The meager polling suggests the rapper barely registers in the race, polling at 2 percent with all registered voters as well as with African-American voters, and notably does not diminish Biden’s 9-point national lead over Trump.

But in their cynically white point of view, Kushner and the GOP still imagine West can pull votes that will be significant to Trump—not enough to tip battleground states, perhaps, but maybe enough to keep the popular vote close and contest the results in decisive states and precincts. On one hand, this is completely unnecessary, given that Republicans have lost the popular vote in four of the last five presidential elections but held the White House for 12 of those 20 years. On the other hand, this is Jared Kushner we’re talking about, the heir to a vast fortune amassed by his father, Charles, who went to federal prison for trying and failing to blackmail his own family, utilizing a video of his brother-in-law in flagrante delicto with a prostitute that Kushner had provided—a crime that even Chris Christie, himself a corruption-filled New Jersey delicacy, called “one of the most loathsome, disgusting crimes” he had ever prosecuted.