Katie Mack achieves two improbable feats with her new book, The End of Everything (Astrophysically Speaking). First, she writes about the end of the universe with a jauntiness that makes it not actually that depressing. And second, she takes concepts in cosmology, string theory and quantum mechanics and makes them accessible. This gift for straight talking will be familiar to the 360,000 followers of Mack’s Twitter feed – @AstroKatie – through which the 39-year-old cosmologist and assistant professor at North Carolina State University has become one of the most popular voices on science.

Why did you want to write about the end of the universe?
There are a lot of books about the beginning. I’ve read some of those books, and I’m fascinated by that question of where we come from. But there are very few books about the end. So I wanted to explore that other side. And I love the idea of studying the ultimate destruction of reality; I just think that’s a cool thing to be able to study.

The book runs through five theories of how it could happen – and you suggest the most likely of these is the heat death. Can you explain what that would entail?
The heat death is… well, it’s the most depressing possible end in some ways. I do find people get really sad when you talk about it. Our cosmos is currently expanding, and the way that expansion plays out is that the spaces in between structures like galaxies and galaxy clusters gets bigger. And in something like 100bn years, other galaxies will be so far away from us, moving away from us so quickly, that we won’t be able to see them any more.

That’s the first stage. And over time, the universe becomes more and more empty. So you end up in this cold, dark, empty universe in which the only thing that’s around is a tiny amount of background radiation, which is basically the waste heat of the cosmos. That’s why it’s called the heat death, because everything has decayed so much that all that’s left is this disordered radiation and that is literally the waste heat of all the processes of the universe.

You’re right, that is bleak.
It really is. I’ve given talks where I have to talk about the heat death, and I’ve seen people hold their head in their hands in the front row and just look like they’ve lost all hope in the world. I’ve done a couple of podcasts for young children and one time I was explaining the heat death and the host of the podcast stopped me and she said: “I don’t think this is appropriate for children.” And I was like: “Oh no!”

Your lectures inspired a song – No Plan – by the Irish musician Hozier. Was that an unexpected development for you?
Oh, yeah. I never thought I’d be name-dropped in a pop song. It’s not a pop song, but yeah, that was not something I anticipated when I went off to study physics in school. So we’d been following each other on Twitter for a while and I guess that’s how he found my videos online. And when he sings that song on stage – people have sent me videos – he’ll sometimes give a two-minute introduction to cosmology and actually explain the process of the heat death and how that works. It’s so weird.

So he’s not worried about depressing his audience then?
Well, if you’re familiar with his lyrics, he writes about a lot of very, very tragic, heart-wrenching things. So that’s a bit in his wheelhouse, I’d say.

Why do you think you have been so popular on Twitter?
It’s been gradual: I’ve been on Twitter for something like 10 years, and over time I discovered it was actually a really good medium for talking about physics in a very succinct and approachable way. And a few times I’ve had a tweet go viral, and that, of course, does a lot. So I had an exchange with a climate denier at some point that ends up on these lists of mansplainer smackdowns. I hadn’t meant to be like that, but it got a lot of attention.

For those who didn’t see it, your tweet was a reply to someone who suggested you learn some “actual SCIENCE” and read: “I dunno, man, I already went and got a PhD in astrophysics. Seems like more than that would be overkill at this point”. Didn’t JK Rowling write that it “forever validated” the existence of Twitter?
Yeah, that was definitely a huge boost to my following: I think that week I went from 40,000 to 80,000.

In the book you mention that Stephen Hawking was very influential. What was it about his work that resonated with you?
I found that stuff when I was, like, 10 years old and it resonated because it was all this mind-bending, weird stuff. The idea of black holes and space time and time travel, the big bang… these are all topics that just make your brain hurt thinking about them. Then, later on, I met him a lot because I was at Caltech [California Institute of Technology] as an undergrad and he would visit Caltech pretty often. Then when I was at Cambridge [University], I had an office near his, so I would see him all the time. He came to a talk I gave once, which was wild. 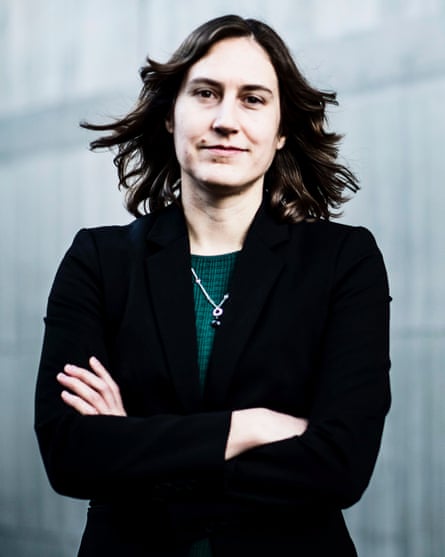 Was that daunting?
Yeah, because he heckled me! So technically, he didn’t mean to. I’d only been at Cambridge for a month, and I was very nervous because I was giving this talk about primordial black holes, which is an idea that Stephen Hawking was one of the first originators of. And as I was starting my talk, I put up the title slide and this mechanical voice says: “Thank you.” I thought maybe he was making a joke about how he came up with this idea and everybody laughed and I carried on. Then throughout the talk, every once in a while, he would just interject something like “Yes!” or “No!” Or “I don’t think so.” And I would just look at him and he didn’t say anything.

So at the end of the talk, I asked somebody what was going on. And it was a lunchtime seminar and the way that his voice synthesiser worked is that it had this little thing that looked at his cheek and he would select words by winking. And apparently it malfunctions when he eats. So his cheek was moving and it was choosing words at random from this Quick Select menu: thank you; yes; no; maybe. Nobody warned me and I’m a grad student and I’m terrified. Here’s my hero in the audience and he’s heckling my seminar. So, “daunting” is a good word for that.

There was an eight-way bidding war between publishers in the US for your book. Does this show there’s a desire to read science books that tackle complicated subjects?
Yeah, I think it’s awesome that people read physics books for fun. I’m super-pleased that’s a thing that we do. Humans are a curious species, we want to understand stuff. And I love that about us.

What’s next? How do you follow the end of the universe?
That’s the problem, I picked the wrong topic. Do I write a prequel? A reboot?

• The End of Everything (Astrophysically Speaking) by Katie Mack is published by Allen Lane (£20). To order a copy go to guardianbookshop.com. Free UK p&p over £15