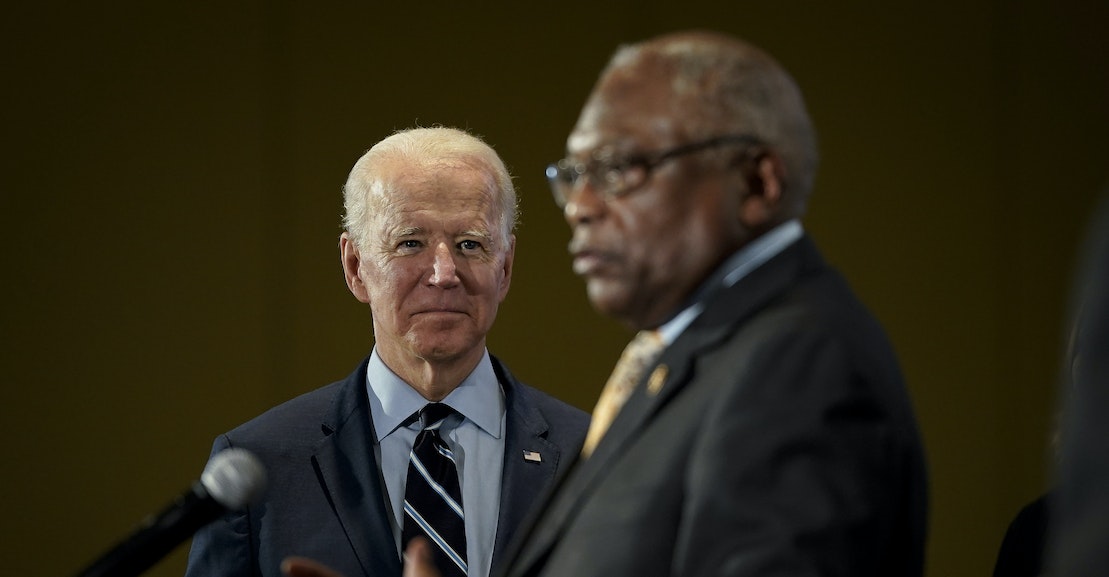 The failure of
Bernie Sanders to take control of the Democratic Party in the 2020 primaries
was understandably traumatic for the American left. Having rapidly ascended from
seeming irrelevance to surging media attention and organizing in just a few
years, many democratic socialists convinced themselves that their moment had
come.

Sanders’s loss
to, of all people, Joe Biden, therefore came as a kind of cosmic joke. How
could it possibly be that a near-octogenarian, whose greatest legislative
achievements were pro-creditor bankruptcy reform and the 1994 crime bill, would
defeat the left?

There was an
obvious explanation, of course. If you’re looking for the person who stopped
the Democratic Party’s movement to the left in 2020, that man is Congressman
Jim Clyburn. It was South Carolina, under Clyburn’s leadership, that turned the
tide, and it was the stubborn support of Biden by the older, more Southern,
more church-going parts of the African American community that denied Sanders
the nomination.

But for the democratic
socialists working to make sense of Sanders’s loss, there must be a more
psychologically comforting culprit. Yale Professor Samuel Moyn, in his recent review in The New Republic of
our book, Never Trump, thinks he has found one: Republican opponents of
Donald Trump. Moyn writes that “Sanders’s
decline had many causes, including his own mistakes, but it definitely mattered
that the Never Trump script treated him as mirror image of Trump, and as
equally perilous for ‘democracy’—and that many a liberal embraced this idea.” Yet
he provides little actual evidence that the Never Trumpers “mattered” other
than assertions of their media influence. A few talking heads on cable tv seems
like a strange explanation for the behavior of largely African American voters
in Greenville and Beaufort, which, given the rhythm of the primary, is the
thing to be explained. The Never Trumpers may make an appealing scapegoat for the
left, but the far more obvious explanation for Sanders’s loss is the simple fact
that the Democratic Party is just not composed of enough voters (including but
not limited to African Americans) willing to provide a majority for democratic socialism,
at least in larger turnout elections.

Moyn’s essential claim is
that we served as easily duped mouthpieces for the Never Trumpers. “Saldin and Teles take a cozy approach to
their study of this movement and its central characters, faithfully drawing on
their accounts of the rise of Trump.” What Moyn characterized as “coziness” we
think of as a rigorous, scholarly effort to try to convey the—inevitably
partial—perspective of our sources. We believe that the Never Trumpers cannot be
understood outside of the professional networks with which they were
affiliated. Moyn made only a passing reference to the central conceptual move
in the book, which is to understand the Never Trumpers as providers of
professional services to the Republican Party. The Never Trumpers we devote our
attention to were the kinds of people who provide policy expertise and staff
key posts in GOP administrations; the political pros who run campaigns; and the
public intellectuals who provide ideas and guard the intellectual boundaries of
conservatism. Each of these professional networks has its own unique story to
tell in the Never Trump saga. Had we simply engaged in some armchair theorizing, without actually delving into these networks, we would never have been able to
grasp many of the key factors that caused lifelong conservatives to oppose a
nominee of their own party.