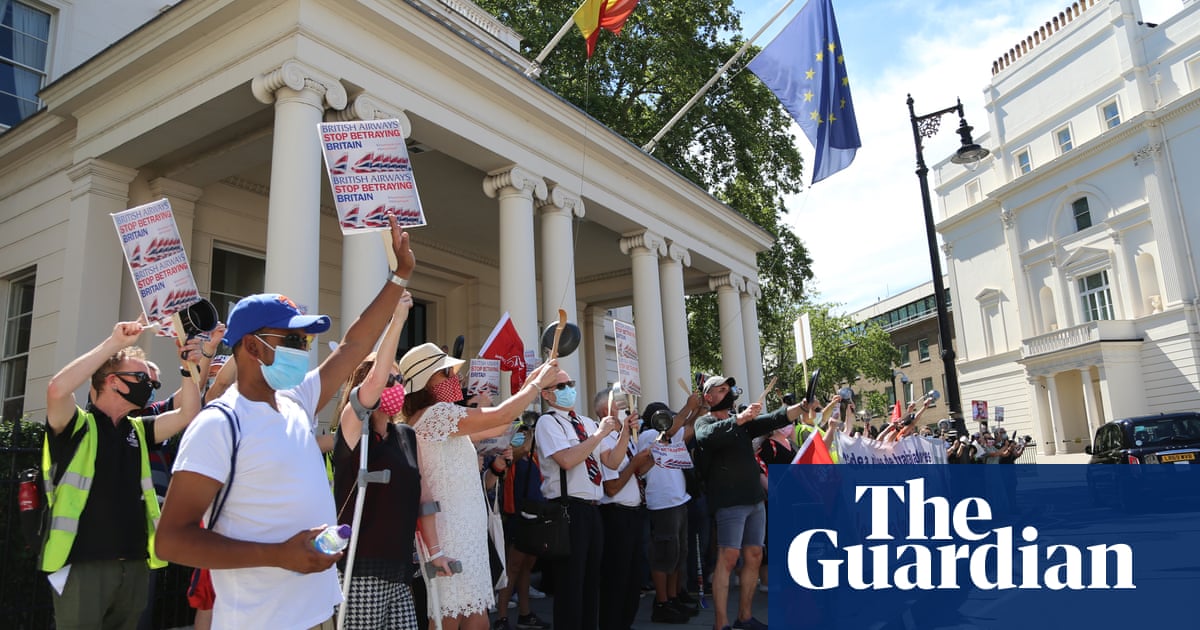 Black and ethnic minority workers are overrepresented in the sectors hit worst by the economic crisis, an analysis by the Guardian has found.

As the UK plunges into what is forecast to be the deepest recession for 300 years, the sectors with the highest rates of furloughed jobs and redundancies have disproportionate numbers of BAME workers.

The transport and storage sector has announced the most redundancies, with 34,000 reported as of 28 July, according to a Guardian database tracking job losses. Black and minority ethnic workers, who make up 12% of the UK workforce, account for 18% of jobs in this industry, according to analysis of the Labour Force Survey.

The companies that have announced job cuts include Royal Mail, which said 2,000 of its workers would be made redundant, and British Airways, which said 12,000 jobs would go.

The accommodation and food services sector, where BAME people are also overrepresented, making up 15% of the staff, had the third-highest number of redundancies, with 16,000 announced as of 28 July.

This sector, which includes hotels and restaurants, also had the highest proportion of furloughed workers, with almost three-quarters of eligible jobs furloughed up to 30 June.

Wholesale and retail, which has a roughly proportionate number of BAME workers, had the second-highest number of redundancies, with almost 24,000 job losses.

The analysis chimes with research published by the House of Commons Library, which found there were above average numbers of BAME workers in areas of the economy that had shut down.

More than 150,000 redundancies have been announced in the UK since the start of the pandemic, according to the Guardian’s tracker, with more expected as the government’s furlough scheme comes to an end in October.

Kimberly McIntosh, a senior policy officer at Runnymede Trust, said: “With the furlough scheme winding down, a tsunami of redundancies has been predicted. This research tells us its already begun, with ethnic minorities on the frontline of the pandemic’s economic fallout.

“Black and ethnic minority communities have borne the brunt of the pandemic, facing a disproportionate fatality rate and are now being hit harder by job losses too. The pandemic is bringing the harsh realities of longstanding racial inequalities in health, the labour market, housing and education, into sharp focus.”

Some BAME groups are less likely to have wealth to help weather a financial downturn, according to a recent Runnymede Trust report.

It found black African and Bangladeshi households had about 10 times less savings or assets than white British households, which held the most wealth, closely followed by Indian families.

Black African and Bangladeshi groups reported wealth of £30,000 or less, compared with £282,000 on average for white families.

Headline unemployment rates have decreased substantially since 2001, but the overall rate masks significant variations for different ethnic groups. For example, the unemployment rate among black people has always been at least twice as high as the rate among white people for the past two decades.

Bangladeshi and black people had the highest unemployment rates as of the first quarter of this year, with 9.3% and 9% unemployed respectively, compared with 3.6% of white people, according to the ONS Labour Force Survey.

Black and Bangladeshi households were also the most likely to be receiving benefits, with about one in three families in each group receiving income-related benefits, compared with 17% of white households. Bangladeshi workers had the lowest hourly wages of any group, according to 2018 data, earning £9.60 an hour on average, compared with £12.03 for white workers.

While it has been mandatory for companies to report their gender pay gaps since 2017, there is no requirement for companies to monitor their racial pay disparities, despite a Conservative party manifesto pledge on the issue.

Marsha de Cordova, the shadow secretary of state for women and equalities, has called on the government to introduce a targeted extension of the furlough scheme for the hardest-hit sectors and publish an equality impact assessment of the financial and social measures it has taken so far to protect and support people through the pandemic. The latter demand was echoed by McIntosh who said it was crucial the government supported black and minority ethnic communities in weathering the economic storm.

De Cordova said: “Not only have black, Asian and minority ethnic communities been hit disproportionately by coronavirus in terms of their health, but now there is mounting evidence that they will be disproportionately hit by the economic crisis too.

“The government has so far not paid sufficient care or attention to how different groups have been financially affected by the economic crisis. It must now urgently change its course of action to address this glaring disparity, which unchecked leaves the sectors where black, Asian and minority ethnic workers are overrepresented the hardest hit.”